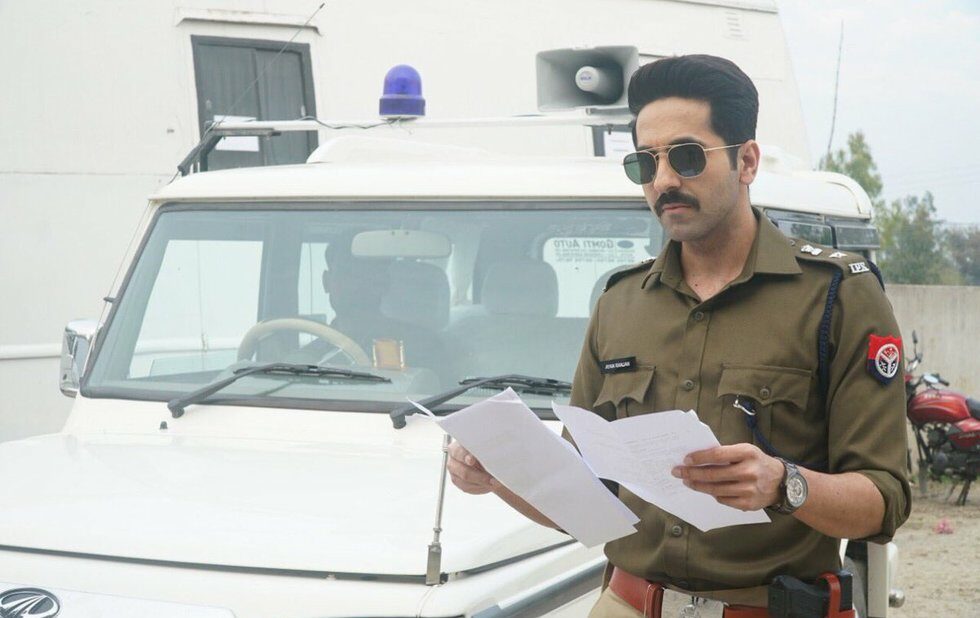 When Bollywood writer/director Anubhav Sinha and co-writer Gaurav Solanki were looking to name a film dealing with systemic discrimination against the Dalits (people belonging to India’s untouchable caste) they took a leaf from the Indian constitution – literally.

Article 15 outlines one of the fundamental rights of Indian citizens: there can be no discrimination “against any [Indian] citizen on grounds only of religion, race, caste, sex, place of birth.” The document goes on to elaborate on forms discrimination and makes allowances for special provisions for the emancipation of women, children and people from socially and educationally disadvantaged classes.

The constitution, whose chief architect B.R. Ambedkar was a Dalit scholar, jurist and India’s first minister of law and justice, was enacted on November 26, 1949. It’s considered the source of Indian law and jurisprudence. Today, many Indians may vaguely remember Ambedkar’s legacy as a social reformer, or their constitutional rights of liberty, equality and fraternity learned in high school civic studies. In reality, both are mainly talking points for India’s privileged classes – of which I am a member.

Having grown up in New Delhi and now living in Toronto, I’m well aware of the atrocities that Dalits face, and I try to address systemic discrimination against the underprivileged in India and Canada among my own peers. And I often rely on art to help start conversations.

These days, I’ve been talking about Sinha and Solanki’s movie Article 15, a mainstream Bollywood thriller about an upper-caste cop investigating a crime against Dalit people in a rural village. While it has been praised for tackling caste-based violence head-on – a topic usually relegated to art house or indie films – it has also been criticized for falling into the “Brahmin saviour complex” narrative.

Traditionally, Dalit characters don’t figure into the Indian film universe. Other than well-worn lines about some characters being from upper caste (oonchi jaat) or lower caste (neechi jaat) and how never the twain shall meet, caste isn’t typically referred to. But it’s understood that peripheral characters doing menial work or dark-skinned villainous characters belong to a lower caste. When movies such as Sujata (1959) or Aarakshan (2011) do address caste, Dalit protagonists are either helpless or dependant on the munificence of upper-caste society.

The Indian film industry is widely upper caste. Only a handful of fraternity members have self-identified as belonging to a lower caste. Given this context, most Bollywood films could be considered as suffering from a Brahmin saviour complex – where the usually fair-skinned savarna hero saves the day.

Although Article 15 starts with the usual disclaimer that it’s a work of fiction, those following Indian media will quickly recognize that the story was inspired by two cases: the alleged rape and murder of two teenage Dalit girls in 2014 and the flogging of four Dalit men in 2016. One of the supporting characters, Nishad (played by Mohammed Zeeshan Ayyub), is also clearly based on Dalit activist Chandrashekar Azad Ravan, down to the blue scarf he sports.

The story centres on Ayan Ranjan (Ayushmann Khurrana), an upper-caste Brahmin police officer. After graduating from New Delhi’s tony St. Stephen’s College and then studying abroad, he returns to India and joins the Indian Police Service. He views his first posting in the small village Lalgaon in Uttar Pradesh as a punishment – a result of being cheeky to a senior bureaucrat. “The villagers look at me as if I’m someone from the British Raj,” Ranjan remarks over WhatsApp to his love interest Aditi (Isha Talwar). “You are like the Indian Mountbatten,” she retorts.

Bemused by surroundings, which he alternatively describes as far from the madding crowd or as a scene out of 80s Bollywood, Ranjan is rudely awakened to Lalgaon’s realities when he’s taken to the scene of two teenage girls hanging from a tree. A third girl is missing, he’s told. Despite being discouraged from delving into this “open-and-shut case” of honour killing, Ranjan probes the deaths and launches a search party for the missing girl.

With atmospheric cinematography by Ewan Mulligan and a tense, thrumming score by Anurag Saikia, Piyush Shankar, Devin Parker and Gingerr, Article 15 is unusual in Bollywood for the way it uses the thriller genre to take on a social issue. It’s reminiscent of HBO series True Detective in how it keeps you on edge as dark secrets are alluded to in ambient lamplight before being exposed in stark daylight.

Dalit activists and writers have criticized Article 15 for failing to meaningfully challenge India’s social hegemony. They argue that it’s not really a film for Dalit people, who are well aware of daily oppression. And Dalits were not represented in the cast other than a real-life sewer cleaner in a bit role.

In response to critics, Sinha and Solanki have talked about relying on their experiences observing casteism in their surroundings and reading the works of Dalit activists and journalists, as well as Dalit literary works such as Joothan: An Untouchable’s Life by Omprakash Valmiki. Article 15 was born out of their outrage at constant news reports of affronts faced by Dalit people and Sinha wanted to “place the camera on the shoulders of the privileged and explore it from that lens.”

After watching the film with my Bollywood meet-up group at Yonge-Dundas, I rewatched it with two academics and an artist: Arun Mukherjee, a retired York University professor whose research interests include Dalit literature Supriya Nayak, an Odissi dancer originally from New Delhi and a political science academic who requested to remain unnamed (it can be difficult to get people to openly talk about caste) whose research centres on thinkers such as Ambedkar.

I agree the film is not specifically for Dalit people. For a Dalit perspective, I’d recommend filmmakers Neeraj Ghaywan, Nagraj Manjule and Pa. Ranjith. And although Article 15 is sparking discussions about privilege in Bollywood, it could have been more radical, the poli-sci academic said. Perhaps Nishad could have played a more central role, but then it would have been a different movie.

If the actual images of the two teenage girls and video of the young men who were flogged didn’t inspire change in real life, what expectations could one have from a Bollywood film to get audiences to reconsider their own prejudice? After all, the most common accusation against Dalit people is that they benefit from various affirmative action measures, he said.

In fact, Article 15 articulates the common complaint against affirmative action. In one scene, a corrupt cop rails against the female Dalit assistant doctor performing the post-mortem while sneering against feminism. The exchange is meant to highlight the absurdity of such claims. But it’s one of many subtle nuances that could be easily overlooked in the larger narrative.

Mukherjee feels Article 15 is a good film given Bollywood’s track record on Dalit representation. These days, she points out, many people living in urban India and in the diaspora consider themselves as casteless. The film could be a wake-up call that reminds viewers of the many ways the caste system permeates their daily lives. She also appreciated that quite a few Dalit characters had agency, even if they were flouted by the system.

Initially wary of reports that Article 15 uses images of the hanging and flogging, and fearing that the filmmakers might have taken a sensationalist approach, Mukherjee feels they gave enough context to justify the use. Art has a different function than news, she adds. In the film we see what happens after the dead bodies are brought down, how a post-mortem is conducted and how the girls are mourned – aspects of the story often left out of news reports.

A mainstream Bollywood film needs a hero, says Nayak, mirroring my own thoughts. For Article 15 to play across India and abroad, it needs a big star like Khurrana, who is known for bringing depth to cute lover boy roles.

We were both uncomfortable with the hubris displayed by Ranjan’s character in vowing to fix the mess (or as he quips, “I will unmess it”). Ranjan literally hammers home Article 15’s message by pinning a photocopy of it on his office bulletin board, in slo-mo natch, as the Indian national song Vande Mataram crescendos on the soundtrack. Then there’s the de rigueur monologue-lecture toward the end that reminds the audience how the names of the many Dalit castes in Hindi are considered swear words, as well as the other ignominies of Dalit lives.

Article 15 is not perfect. The tautness of the script simplifies incredibly complicated social dynamics. However, I agree with some Dalit activists who believe a mainstream Bollywood film meaningfully engaging with the question of caste is a welcome step.

For all its shortcomings, I appreciate Article 15 for giving me yet another occasion to reflect on my own privilege. I won’t soon forget its haunting score or imagery, or the characters of Nishad and Gaura (Sayani Gupta), the older sister of the missing Dalit teenage girl. I will especially remember a scene that shows Nishad sobbing into Gaura’s lap. They were once supposed to get married, but Nishad gave up love for revolution. Nishad tells Gaura there is so much he wishes he could say, but he can’t because he needs to be strong for everyone.

“You can tell me,” Gaura says to him. And that’s the very least that I can do: Think about how better to listen to and learn from Dalit people in my social orbit, and to amplify their voices.