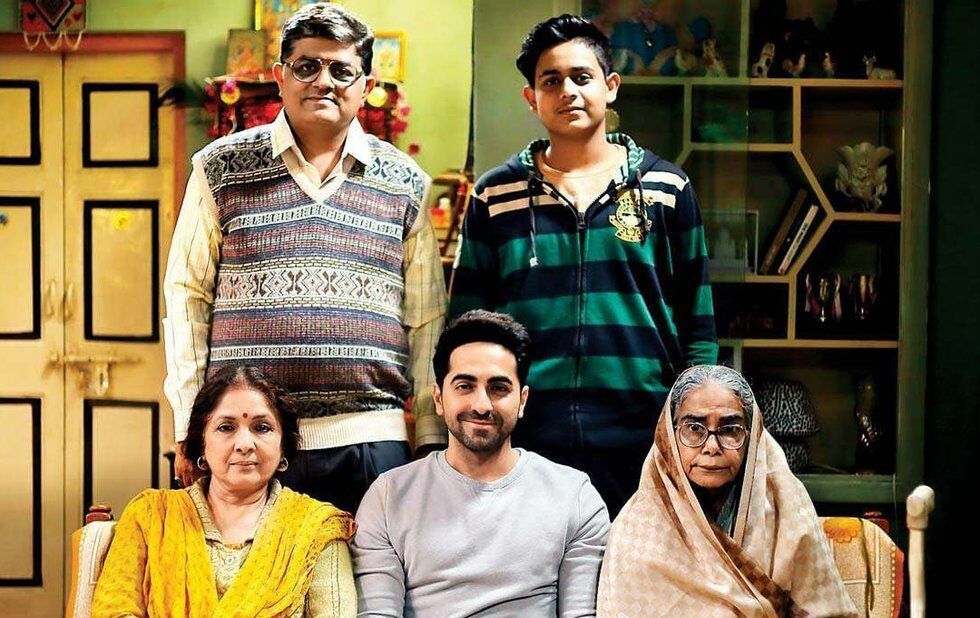 There used to be a time when Bollywood didn’t talk about sex. Instead, India’s film industry was infamous for visuals that suggested sex – like a dance sequence featuring the female lead in a rain-drenched sari, with the male lead pulling on the pallu (fabric hanging from the woman’s shoulder). Or even cutaways from a couple about to kiss to blooming flowers and mating birds.

These days, Hindi films aren’t that shy. The word “sex” is bandied about by all characters, men and women, from a variety of social strata.

Despite these advances, sex or being sexy are still in the domain of young people in Bollywood. That’s why the newly released romantic comedy Badhaai Ho – playing in eight cinemas across the GTA, including Cineplex Yonge-Dundas Square – is so refreshing.

The title refers to the celebratory greeting given when hearing joyous news, such as a wedding or a pregnancy announcement. The plot revolves around Priyamvada (Neena Gupta) and Jeetu (Gajraj Rao), parents of two grown-up sons – Nakul (Ayushmann Khurrana) and Gullar (Shardul Rana) – who discover they are expecting another child. The news becomes a source of embarrassment for Nakul. Things are getting serious between him and his office colleague girlfriend, Renee (Sanya Malhotra), and he’s just passed the meet-the-mother test. Add to the mix Jeetu’s mother, Dadi, played with cantankerous verve by Surekha Sikri.

If you know, like I do, the nuances of the specific New Delhi cultural class – and clash – in Badhaai Ho, there are many delightful small details to relish. But even if you don’t get those subtleties, the movie delivers the laughs to a larger audience (and the subtitles really do translate the humour well).

What’s truly remarkable, however, is the way Badhaai Ho could play a part in normalizing the idea of talking frankly about sex, especially in the context of sex-ed curriculum debates happening in Toronto’s South Asian communities.

The fact of the matter is, sex is still a fairly taboo topic in South Asian families. We got a sense of this in Ontario when conservative South Asian parents joined an unlikely alliance with “Chinese evangelicals from Thornhill and Markham, Coptic and Russian Orthodox Christians from Scarborough and Peel” to oppose the updated sex-ed curriculum in 2015. They felt the new curriculum didn’t align with their cultural and/or religious values because it included concepts like gender identity and discussions of healthy and safe sex.

When Doug Ford’s conservative government came to power, it repealed the updated curriculum. The interim one – in place while the government conducts a province-wide consultation – does not mention the names of genitalia, does not provide more than cursory information on gender identity, suggests abstinence as a way to remain sexually healthy and does not include discussions on consent.

Menstruation was mostly a mystery, a reminder of the shame associated with a stained skirt. And sex was something to be feared. I remember being warned repeatedly that my various infractions – wearing short skirts, coming home after dusk, talking to boys – could end with rape. But nobody told me what rape was.

Back in those days, Bollywood movies added to this general sense of fear and shame with plot lines about young women who had premarital sex, got pregnant and brought dishonour to family. The rape scene was a horrible trope in many movies throughout the 80s. More suggestive than graphic, the scenes were often framed for titillation whereby a woman’s clothes were torn as she cowered in front of her tormentors, begging to be saved from disrepute.

Contemporary Bollywood movies have changed to reflect some current realities. Young people are shown engaging in premarital sex without raising many eyebrows – at least in upper-middle-class circles, and so long as the characters in love are not crossing class, caste and religious boundaries. Sex is still seen as something risqué, an activity done on the sly.

In that context, Badhaai Ho is remarkable for its frank and normalizing discussions about Nakul’s parents having sex.

Take, for instance, the scene where Dadi learns that her daughter-in-law is pregnant and scolds the younger couple like errant teenagers, wondering out loud when they found the time for sex.

That the story emphasizes that Jeetu and Priyamvada have a loving and sexually active life was wonderful to watch – as was Priyamvada’s shy smile when complimented by her neighbourhood friends, or Jeetu sneaking glances at his glowing wife.

I watched the movie in a packed theatre on a weekend evening. The audience was mostly made up of young people, many on dates. There were even a couple of young parents who had brought their toddlers along. There were a couple of older folks, too. And a mom and daughter sat next to me.

We all laughed together, and that’s certainly something to celebrate.