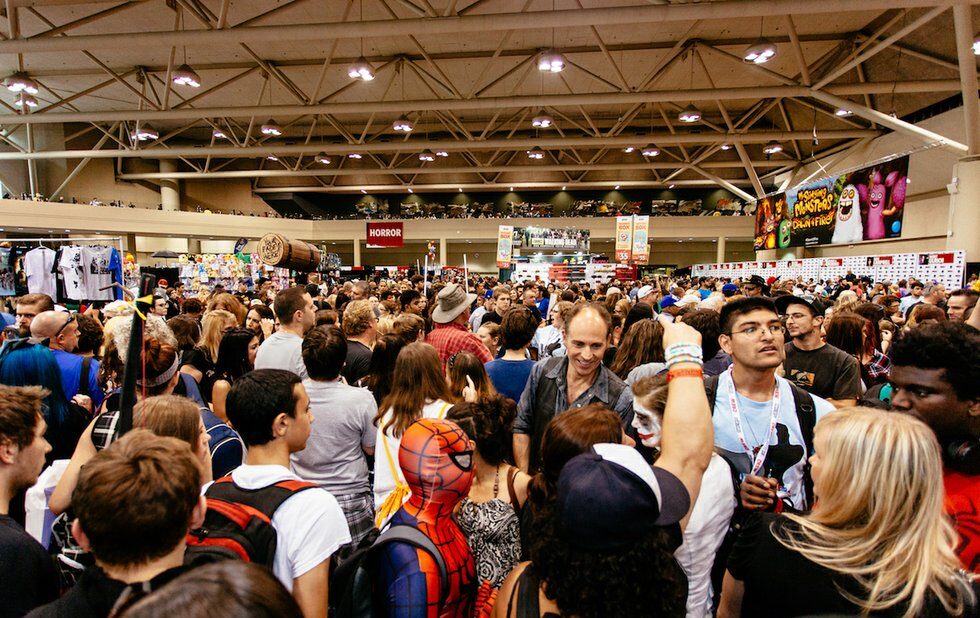 No, you haven’t lost time Fan Expo Canada is marking its 25th anniversary by changing its schedule, arriving a full week ahead of its traditional Labour Day window. All weekend the Metro Toronto Convention Centre will be bursting with cosplayers, autograph hunters and genre enthusiasts of every stripe, hoping to run into their real-life heroes. Sadly, Jason Momoa has cancelled, so the first meeting of Aquaman and Shazam on Canadian soil will have to be postponed. (Zachary Levi will still be there, though!)

To help you sort through the crush of meetups, escape rooms and deep-dive panels with your favourite creators, we’ve provided this handy list of highlights. Oh, and there’s also an advance screening of John Travolta’s new thriller The Fanatic (Saturday, 6:30 pm, Room 701B) for passholders. That could be interesting. His haircut is really weird. You can also meet him in person on Sunday at 11 am, 2 pm and 3:30 pm.

Hang with the Kims (and their extended family)

Nearly the entire cast of CBC’s homegrown sitcom Kim’s Convenience – Paul Sun-Hyung Lee, Jean Yoon, Andrea Bang, Andrew Phung, Ben Beauchemin, Amanda Brugel and Michael Musi – will be assembling for a Q&A Friday afternoon to discuss the show, the Kimbits fan movement and how weird it is that co-star Simu Liu is a freakin’ Marvel hero now. These are the nicest people in town, and you should go hang out with them. Maybe they’ll even leak some plot points for the upcoming fourth season. (Friday, 3 pm, room 206)

A panel with the Star Trek: Discovery production design team

Set about a decade before that Kirk guy took command of the Enterprise, Spock, Star Trek: Discovery has had to retrofit a universe originally designed in the 60s for a 21st century audience – and it’s been a trip. Join supervising art director Joshu de Cartier, costume designer Gersha Phillips, set designer Emilie Pouli, MGFX designer Tim Peel, graphics designer Andy Tsang and VR visualization specialist Daniel Voshart for a nuts-and-bolts conversation about re-inventing the future, moderated by art director Matt Middleton. And then you can roll into the Klingon costuming panel at 5 pm in room 717. (Friday, 4 pm, room 701A)

Nothing but respect for our President

Mary McDonnell earned her genre stripes in Independence Day and Donnie Darko before achieving immortality as Battlestar Galactica’s overmatched but unyielding space president Laura Roslin. Now, a decade after that show ended its run, McDonnell’s meeting her fans in a Q&A moderated by James Wallace. Hopefully someone will ask her about her work in Sneakers and Passion Fish no, they’re not SF but she’s brilliant in both of them and I would like someone to tell her so. (Saturday, 11 am, room 206)

Enjoy a Saved By The Bell reunion

Mark-Paul Gosselaar, Mario Lopez and Elizabeth Berkley will be sitting down to talk about the good old days at Bayside High… which sounds like a perfect Saturday morning panel for 90s kids, doesn’t it? (Saturday, 11 am in Room 106)

A Q&A with Brendan Fraser

Another candidate for “nicest guy in the business,” Brendan Fraser is coming to Fan Expo to hang out with Morgan Hoffman and answer questions about his decades in genre and genre-adjacent entertainment: the Mummy franchise, DC’s Doom Patrol, George Of The Jungle, Encino Man. Throw him a curve ball and ask him about The Quiet American! It’s one of his best performances! (Saturday, 12 pm, Cineplex Events Main Theatre)

Tom Welling, Kristin Kreuk, Michael Rosenbaum and Laura Vandervoort are getting the band back together to celebrate the fan-favourite WB series and its “no tights, no flights” approach to Superman’s teen years. Please don’t offer to shave Rosenbaum’s head on stage. Nobody wants to see that, least of all him. (Saturday, 3:15 pm, Cineplex Events Main Theatre)

Rutger Hauer’s death last month means this cast reunion is likely to be a little on the sombre side, but Sean Young and Edward James Olmos are still talents to be reckoned with… and it’s likely they’ll have some insight into Hauer’s creation of one of the genre’s most memorable – and magnetic – anti-heroes. (Saturday, 4:15 pm, Room 206)

The Adventures Of Buckaroo Banzai: Across The 8th Dimension, The Fly, Jurassic Park, Independence Day, Thor: Ragnarok, that piano jazz album… is there anyone who’s been involved in more cult projects than Jeff Goldblum? It’s a trick question: Jeff Goldblum is his own cult. And now you can declare fealty to him in a public forum, or at least ask him about his Buckaroo Banzai outfit. That’ll, ah, that’ll be fun. (Sunday, 11 am, Cineplex Events Main Theatre)

Everyone knows that Goonies never say die. But did you also know that Goonies grow up and hit the autograph circuit? Sean Astin, Corey Feldman and Ke Huy Quan hit Fan Expo’s main stage to talk about co-starring in Richard Donner’s definitive 80s kid’s adventure… and maybe trade stories of the projects they’ve worked on since, like The Lost Boys and that movie about the hobbits. (Sunday, 12:30 pm, Cineplex Events Main Theatre)