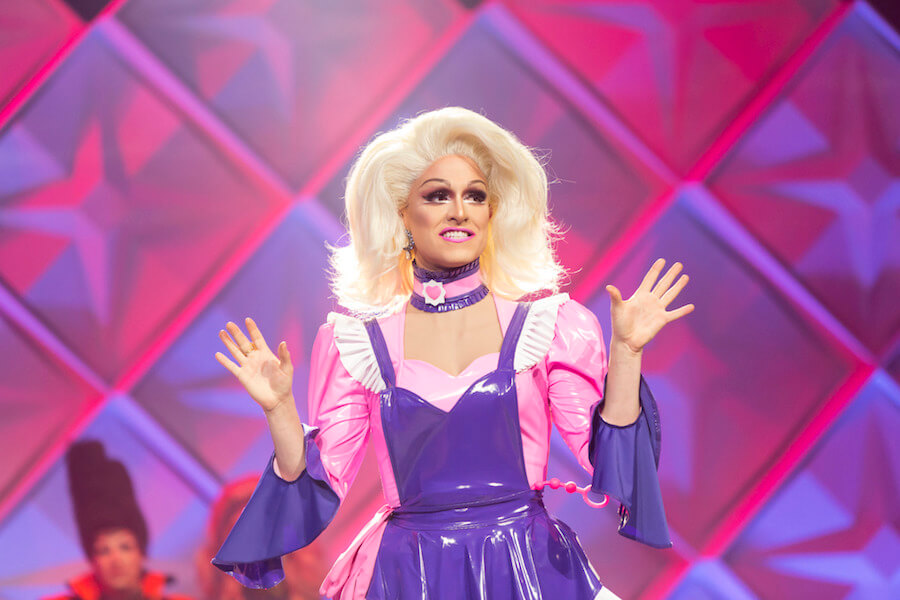 Canada’s Drag Race is winding down, which means the therapeutic ugly-cry moments are ramping up.

The second season’s eighth episode was the makeover challenge, always an affirming and cathartic time for the contestants who’ve been cooped up in the production bubble for weeks by this point. It’s also a necessity for the audience – late in the season we’ve been so focused on the queens that having fresh faces come into the Werk Room and shake up the dynamics feels like a welcome reprieve.

For a few brief moments, we’re taken out of Drag Race’s careerist focus and reminded of community.

But this is still a reality TV show competition and someone has to get eliminated. For the makeover challenge, the remaining five queens – Icesis Couture, Adriana, Kendall Gender, Gia Metric and Pythia – had to design outfits to realizea group of queer teens’ prom fantasies. The resulting looks had to serve mother-daughter, though matching outfits was not a strict requirement.

Before all that, the queens also had virtual visits from parents and partners. It was heart-warming but also gave us a more visceral sense of the personal stakes for each contestant. Quebec City queen Adriana received a virtual visit from her partner, who is also her creative partner. With a lot of the talk around the show shifting in recent years to the money and labour required to audition, it was a rare moment where the on-air banter echoed some of the behind-the-scenes chatter.

Unfortunately, the judging panel felt Adriana’s mother-daughter runway wasn’t convincing enough and she landed in the bottom with Ottawa’s Icesis Couture, one of the season’s front runners. The pair faced off to Mitsou’s 1993 RuPaul-penned pop-house tune Everybody Say Love. The French-Canadian singer was also on the judging panel, and the performance earned a standing ovation.

Adriana got the chop, ending a run that saw her win an acting challenge, dazzle the judges with an elaborate Marie Antoinette look and land some biting one liners (on Gia Metric: “Gia, or should I say, Gigi not as Goode“). The morning after her elimination, we caught up with the Quebec performer to talk about emigrating from Colombia, discovering the Bogota drag scene and the support required to get on Drag Race.

I would’ve never imagined being a drag queen but when I look back it all makes sense. I started as a backup dancer for other drags in Quebec City. One day I was like, I want to do concepts and the queens didn’t want to do my concepts. So why wouldn’t I try it? I started watching YouTube videos, tutorials, making outfits, putting things together and started performing. I was already a dancer so it was easier for me to get bookings. I grew up in Quebec City, and then Montreal and now I’m here.

I’ve read that you’re from Bogota. What’s the drag scene like there?

When I left Colombia I was 16 so I had never seen a drag show. I didn’t know it existed. The first time I saw drag was in Quebec and my mind just blew. When I went back to Colombia I was old enough to see drag shows. It was so different but in other ways so similar to what we do here. We’re very special in Colombia. There’s so much talent there. I can’t wait to go and perform – I’ve never performed there.

What’s different about the scene there?

I saw two types of shows: the regular show and the productions they’re putting on. It’s impressive. I saw this one, what was it called? The Mother of Dragons? What’s that TV show?

Game Of Thrones! Thank you. It was a Game Of Thrones-themed show with this big dragon literally onstage. I was used to little drag shows on a big stage because in Quebec City our stages are huge compared to many places. Most of the shows are in little stages so when I saw that I was like, okay, okay, okay! We’re not playing here Colombia.

Mother Of Dragons would be a good name for a gay version of Game Of Thrones.

I’ve read that you’re the first queen of Colombian descent to be on any Drag Race show.

I’m so proud of representing Colombia right now. People from Colombia have shown me so much love, telling me they feel represented. That feeling of being an example to other people, I didn’t have when I was younger. So it’s just incredible. I can’t wait to go there and perform for the first time. I think people are gonna give me so much love when I’m there. I’m gonna do everything they want and more.

Let’s talk about the lip-sync from last night. You went home but got a standing ovation and you did Mitsou’s Everybody Say Love in front of Mitsou. What was going through your head when you ended up in the bottom?

It was very hard to be in the bottom two. I felt like I was going home but at the same time I had this moment where I spoke to myself and said “get yourself together.” You’re here for something, you have to fight to the end. Performing in front of Mitsou was an honour, but I thought whoever is on that judging panel, I’m going to impress them. I think Icesis and I did such a good lip sync and I’m sure people are going to start to listen to Mitsou’s song even more now. However, Mitsou offered me a lift to go back home but she left before I got to pick up my stuff. [laughs] It took me a little too long to get my luggage ready.

All the queens had a moment with a loved one during the episode. We saw your partner, who is part of your drag career. How did you work together to get on the show?

This sounds maybe weird but I’ve never had a Barbie when I was growing up and now I feel I’m that doll and I’m his doll. Sometimes he pushes me to do things I wouldn’t think of. He gives me an idea and we start stitching some stuff together, developing concepts and putting it on me. We’ll think of, let’s say, an animal and how do we turn that animal into a performance? How are we gonna turn this body into a drag outfit? It’s a lot of communication and he’s so supportive. He’s helped me so much with all the money involved because this is expensive. The looks we made to go on Drag Race, he was sewing and literally falling asleep on the outfits. We put so many rhinestones on everything.

Adriana serves cake on the runway as Marie Antoinette.

What looks were you most proud of?

The Marie Antoinette was something. The plate took so long to make. I had panic attacks the first time I was trying because I was trapped in this plate with a little door opening in the back. I thought if I have to lip sync in this I’m breaking my neck

You won an acting challenge. Do you have acting experience?

I won an acting challenge. It was a character who was supposed to be [judge] Brad Goreski but I thought why not turn him into a Rocky Horror Picture Show Brad Goreski? I tried it. It could’ve bombed but it worked so good. I’ve done some theatre in school. My shows are very conceptual with a lot of characters so I’m used to analyzing a character and becoming that character. I was pretty sure I was gonna win one. In the girl group dancing challenge, I was like okay these girls picked me last? That’s because they don’t know that I’m good in group performances and I’m a scene beast.

I’ve been reading quotes from you and it seems like you don’t mind filling the role of the villain if need be. Were you always drawn to villain characters growing up?

The villain characters are always my favourite in all the movies – female characters. There’s this strength and power that they have. I love playing villains. I love Ursula – so sexy and sure of herself and love that body. The Queen of Hearts – she’s just too much. She’s this expensive woman getting mad at everyone. Everybody loves villains.

Watch a video version of this interview below: