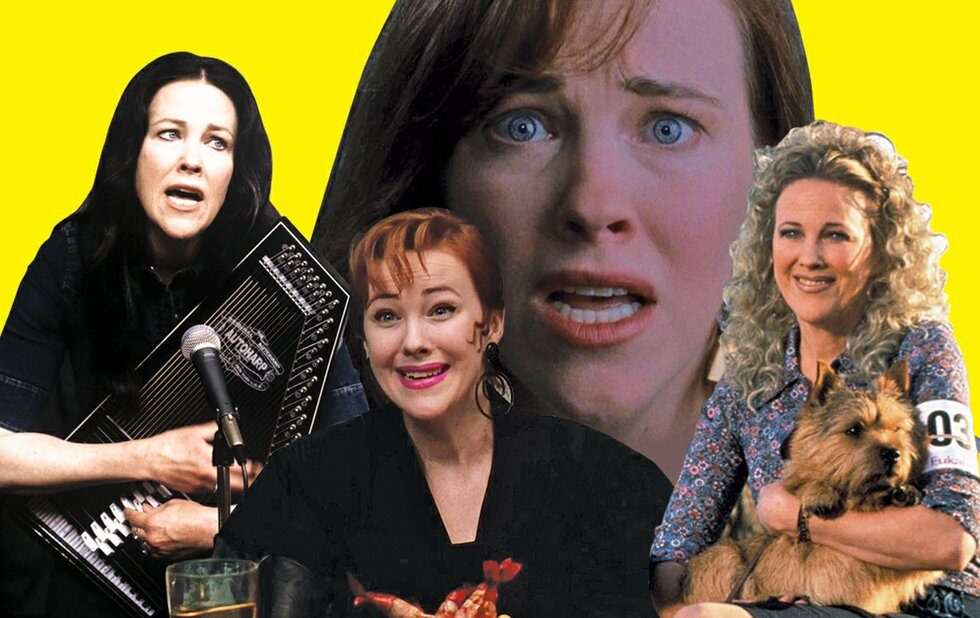 CATHERINE THE GREAT: IN PRAISE OF CATHERINE O’HARA from Wednesday (January 15) to February 7 at TIFF Bell Lightbox (350 King West). tiff.net/ohara.

As Canada prepares to bid goodbye to Moira Rose, TIFF is holding a salute to the woman who brought her to life with Catherine The Great: In Praise Of Catherine O’Hara, a mini-retrospective of her finest comic moments. Which got us thinking: what about the rest of them?

And so we started digging into Catherine O’Hara’s filmography, which goes back a good 40 years at this point, to salute her best work and try to be nice about the other stuff.

In order to keep things manageable, we stuck to her actual appearances in movies, which means her voice work in Tim Burton’s The Nightmare Before Christmas, Where The Wild Things Are and Frankenweenie had to be sidelined, along with most of her TV appearances. We’re not happy about it, either.

Guest’s underrated folkumentary pairs O’Hara with Eugene Levy (of course) as Mitch and Mickey, folk stars who haven’t seen each other since breaking up professionally and personally decades earlier: the film gets all of its drama from the question of whether the pair will be able to reunite for the climactic concert, and whether they’ll do their signature kiss at the end of their biggest hit. Levy plays Mitch as a genial space-case, which works nicely, but O’Hara digs into Mickey to find a woman who – while kind of quietly goofy – is genuinely haunted by the opportunities she’s missed and the regrets she still carries. The camera lingers on Mickey just long enough for us to see all the emotions she’s trying to hide, and O’Hara uses every sideways glance and tilt of her head to communicate her depth of feeling. And that final number? Perfect.

It might not be her greatest performance – that would be A Mighty Wind, and I will fight anyone who dares to say otherwise – but Tim Burton’s spooktacular comedy gives O’Hara an ideal showcase for her frantic comic energy. As self-centred big-city artist Delia Deitz, newly transplanted to a haunted house in the sticks, she’s constantly shifting between the unflappable hauteur of a jaded scenester, the moderate warmth of an inattentive parent and the uncomprehending terror of someone who’s just discovered that a) ghosts are real and b) they’re making her do Harry Belafonte karaoke. And she has to do all of this while sharpening every line reading into a perfect barb. (“Is there no Szechuan?”)

As the vengeful ice-cream truck driver who pursues Griffin Dunne across lower Manhattan in his comic nightmare, O’Hara creates a complicated, chaotic character in just a few short minutes of screen time. This was her first major project outside of SCTV, and she absolutely nailed it. The scene where she invents a weird verbal tic to keep Dunne from remembering a crucial phone number is a marvel of reactive performance. Scorsese couldn’t have picked a better actor for the role.

Guest’s follow-up to Waiting For Guffman corrects that film’s biggest mistake, which was not pairing O’Hara and Eugene Levy for maximum comic effect. Here, as woefully underprepared Florida dog fanciers Cookie and Gerry Fleck, they establish a comfortably weird codependency and run with it. Also, their dog is adorable.

There’s an awful lot of SCTV’s Lola Heatherton in Sheila Albertson: extroverted, insistent, kind of annoying after about 90 seconds. Basically, Sheila is who Lola would have been if she’d gone into travel services instead of showbiz. Along with her eager-beaver husband Ron (Fred Willard), she’s a member of the moderately talented repertory ensemble run by Corky St. Clair (Guest), and we get to watch as these bozos try to stage a musical about the history of a town where absolutely nothing has ever happened. It’s fun!

Kasdan’s epic, serious Western had the misfortune of coming out six months after George P. Cosmatos’s campier Tombstone had given the world Kurt Russell’s mustachioed marshal, and it’s been sort of forgotten as a result. But it’s the one with O’Hara as Earp’s sister-in-law Allie, and it’s amazing to watch her steer all of her energy into the character’s spine. She’s also more than a match for Michael Madsen as her on-screen husband Virgil – and for Kevin Costner’s Wyatt, as well.

O’Hara won her only Genie (now known as a Canadian Screen Award) for this movie, an ensemble piece (also starring Sarah Polley, Stephen Rea. Martha Burns, Joe Pantoliano, Leslie Hope, David Hewlett and Fab Filippo) about a handful of people who all happen to be at the same coffee shop during a shooting incident. Fun fact: O’Hara’s future Schitt’s Creek co-star Emily Hampshire is in this! Less fun fact: Semi Chellas’s screenplay was inspired by a real-life murder at the Just Desserts café in Yorkville.

Almost immediately after After Hours, O’Hara turned up in Nichols’s adaptation of Nora Ephron’s roman à clef about her marriage to philandering journalist Carl Bernstein, with Meryl Streep and Jack Nicholson playing the unhappy couple. O’Hara sports a decent Southern accent as Betty, a Washington gossip columnist who takes a little too much pleasure in her work – and has a bouncy chemistry with Streep that makes you wish they’d made a buddy comedy in the 90s or something.

9. For Your Consideration (Christopher Guest, 2006)

Guest’s mockumentary about the making of a bad generational drama is a little on the nose, and no more so when it introduces O’Hara’s character, awards-chasing actor Marilyn Hack (get it?). It’s entertaining in fits and starts, with O’Hara chewing scenery out of desperation and neediness rather than overconfidence, but it’s definitely on the lower rungs of Guest’s comedies.

An entire generation was introduced to O’Hara as Kevin McAllister’s panicked mom in this blockbuster comedy, which is nowhere near as good as you remember it – honestly, these days I kinda root for the Wet Bandits – and in fact gets all of its warmth from O’Hara’s frazzled but determined performance, and that one scene where she gets to hang out with Gus Polinski, the Polka King Of The Midwest, played by her old SCTV pal John Candy. The sequel gave her even less to do.

As a young woman who comes to stay with her late mother’s boyfriend (Anthony John Denison) in a Nevada desert town, O’Hara does her best to bring an underwritten character to life in Lang’s listless indie. Keep moving.

O’Hara turns up as Texie Garcia, one of the hoods who joins Big Boy Caprice’s syndicate. It’s just a walk-on, really, but at least she gets to trade glowers with Al Pacino.

I like to imagine O’Hara signed onto writer/director/star Alda’s lumpy ensemble comedy just so she could hang out and swap stories with Madeline Kahn, Joe Pesci, Joey Bishop, Anthony LaPaglia, Molly Ringwald and Ally Sheedy at craft services. That would have been fun.

O’Hara is clearly doing a favour for an old pal by turning up in Steve Martin’s glum reworking of George Eliot’s Silas Marner as a shopkeeper who helps Martin’s miserable protagonist raise an abandoned child. But she gives the throwaway role as much consideration as anything else she’s done, working little gestures of empathy and warmth into every moment she has onscreen.

O’Hara pops up as part of the ensemble in Howard’s breezy celebration of print journalism, which stars her Beetlejuice buddy Michael Keaton as a newspaperman with a cause in what now feels like a dry run for Spotlight.

Wanna watch North American actors struggle to sell creaky Irish whimsy? Dig up this forgotten coming-of-age comedy, which casts O’Hara as the wacky ma of 1977 teenager Jared Leto opposite Gabriel Byrne, who produced the film, as his dad. There’s a reason some movies fade away, folks.

O’Hara made the most of a rare villainous role as a woman plotting to bump off pregnant drive-through employee Drew Barrymore for sleeping with her husband in this incredibly convoluted romantic comedy/drama/thriller, written by Breaking Bad creator Vince Gilligan when he was in film school. She also somehow manages to make us believe she could be Luke Wilson and Jake Busey’s mom, which may be the biggest stretch of her career.

O’Hara makes a brief appearance as an attorney in McNaughton’s flat comedy of manners, which stars James Spader as a psychologist whose life is spiralling out of control. More notable now for the early Nick Offerman appearance than anything else.

Another mom role… but a fun one, as O’Hara gets to slosh around as the alcoholic mother of Colin Hanks’s reformed surfer Shaun, and eventually have some fun scenes with John Lithgow as her estranged husband. SCTV buddy Harold Ramis is in there too, somewhere.

“Lonely millionaire pays ordinary family to pose as his family for Christmas” is not exactly the recipe for a beloved holiday comedy, but given that the millionaire is played by Ben Affleck at his most tone-deaf, and the family is played by James Gandolfini, O’Hara and Christina Applegate at varying levels of incredulity, there’s some fun to be had in watching things go terribly, terribly wrong. O’Hara gets some good face work in, I’ll say that much.

As a judge who’s also the neighbour of Jim Carrey’s deceitful Count Olaf, O’Hara’s one of half a dozen ringers who pop up in small roles in the first adaptation of Snicket’s books. She’s enjoying herself.

Okay, so imagine there’s a movie where Michael Keaton stalks Robert Downey Jr. over a bad review, but gets distracted because the World Series is on. And imagine that somewhere in there, there’s a little Beetlejuice reunion between Keaton and O’Hara, who plays his character’s ex. That’s this movie. It’s something.

This is that really weird movie where Christina Ricci has a pig nose because of a family curse, and O’Hara and Richard E. Grant are her parents. James McAvoy and Peter Dinklage are also in it. It’s not very good. Let’s move on.

O’Hara turned up her warmth – and earned an Emmy nomination – as Aunt Ann, the rancher whose farm provided comfort and support to the young Temple (Claire Danes) and helped her develop her theories of humane handling of livestock, in this HBO biopic.

O’Hara goes big as Adam Scott’s self-absorbed mother in this clever but forgettable comedy about a man trying to understand why his parents’ marriage failed. (Turns out it’s because the movie needed a premise.)

As the understandably confused mother of a young bride (Sara Canning) being pursued by a scruffy stalker (Ryan Kwanten), O’Hara – reunited with Tall Tale director Chechik – puts her best spin on some very weird dialogue and makes you wish she had more screen time. This is her thing.