NOW MagazineMovies & TVNews & FeaturesChadwick Boseman: 5 essential roles before Black Panther (and where to stream them)

Chadwick Boseman: 5 essential roles before Black Panther (and where to stream them)

Now that the charismatic Boseman's a bonafide star, here are five other heroic performances he delivered before his blockbuster breakthrough 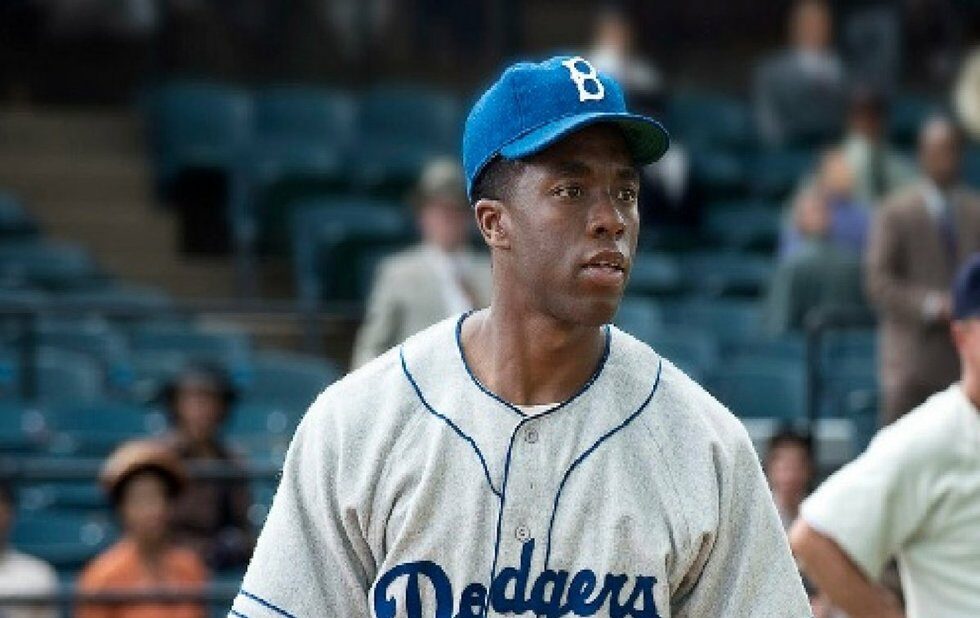 Chadwick Boseman has been playing heroes since long before Marvel Studios cast him as Prince T’Challa for Captain America: Civil War. Now that the Black Panther solo movie is here, we thought you’d appreciate a rundown of his earlier projects. You know, in case you can’t get a ticket this weekend.

Brian Helgeland’s drama about Robinson – the first Black person to play Major League Baseball when the Brooklyn Dodgers recruited him in 1947 – is straight up hagiography, with Harrison Ford’s crusty Branch Rickey constantly talking about the historical importance of Robinson breaking the colour barrier. Boseman gives Helgeland the performance he clearly wants – a good sportsman who verges on saintly, and just wants to play ball – but I wish he’d been able to dig into the psychological toll that must have come with being a focal point for America’s racists.

Chadwick Boseman’s undeniable charisma was a perfect fit for Brown’s powerful stage presence – though as Helgeland did with Robinson, director Tate Taylor isn’t willing to fully explore the complexities of the character. In this case, Taylor sees Brown as a seething egotist who also happened to be a great entertainer, pushing everything off to the side in order to pack in more music.

Black Panther takes place just a few days after the events of Marvel’s all-star smackdown, which introduced the character as a mysterious warrior fighting a very personal battle within the larger wheels of an elaborate revenge plot. Behind all the tights and fights, there’s a young man who’s trying to find his father’s killer – and, when he finally does, chooses mercy rather than revenge. It’s what constitutes a twist in the Marvel movies, which usually end with something very large falling on its villains. T’Challa’s a man who forces himself to understand his enemy as a fellow human being, whatever the cost. And Boseman shows us that empathy is a strength, not a weakness.

Watch it on Netflix.

In a riff on neo-noir vengeance movies like Steven Soderbergh’s The Limey, Boseman plays a South African national who arrives in Los Angeles to find his missing sister – and, ultimately, to take violent revenge on everyone responsible for her disappearance. Belgian director Fabrice du Welz (Calvaire, Vinyan) is working on autopilot, setting up one brutal confrontation after another, but Boseman is terrific as the curt, unrelenting hero, moving like a Terminator through a sleazy assortment of heavies, including Alfred Molina as a decadent Hollywood producer and Luke Evans as a monstrous dentist.

Watch it on Netflix here.

Before he became the first African-American justice on the Supreme Court, Marshall was a respected New York lawyer who frequently worked with the NAACP on racially charged cases. That’s the Marshall we meet in Reginald Hudlin’s biopic, which takes place in 1941: an educated, confident man who arrives in Bridgeport, Connecticut, to defend a Black man (Sterling K. Brown, who has a small role in Black Panther) accused of raping a white woman (Kate Hudson). Boseman is magnetic in the role, and his scenes with Josh Gad (who plays Marshall’s untried partner) have a nice give-and-take that shows Marshall without his mantle of furious legal warrior. The role would have made him a star, if a) the distributor hadn’t tanked the film’s release and b) he wasn’t one already.

Available on Google Play and iTunes.