Cinefranco Is Back, Mes Amis 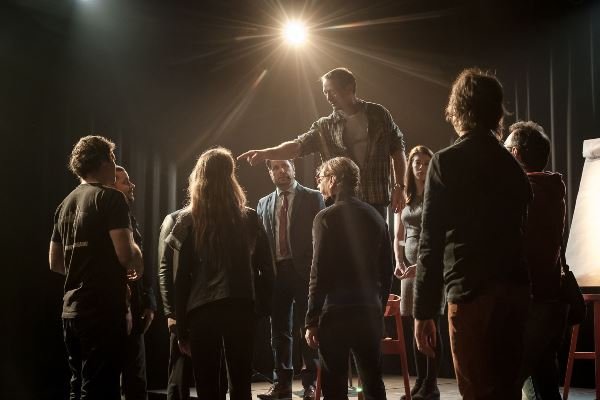 After spending the last couple of years in flux, dealing with postponements, shifting venues and scaled-down programs, the Cinefranco film festival arrives at the Carlton Cinemas with a 2017 edition that looks a lot like its older self.

Once again, the festival has assembled a selection of commercial French-language cinema from around the world, mixing themes and genres with abandon. That breadth of selection has always made Cinefranco feel especially ambitious in its scope, and it makes sense that this year’s edition should kick off with an equally ambitious project.

That would be 9, Le Film (Friday, 7 pm), an ensemble comedy adapted by Stéphane E. Roy from his 2005 stage play 9 Variations On The Void, a comedy about communication structured as a series of intimate conversations. (Yes, that’s vague. Trust me, it’s all you need to know going in.)

Roy – who also appears in the film as the motivational speaker who connects all the various threads – co-directed the movie with eight colleagues, among them actor/director Luc Picard (A Summer In Kigali), Érik Tessier (5150 Rue Des Ormes) and Erik Canuel (Bon Cop, Bad Cop). And they’ve recruited half of Quebec cinema to play it out, including Anne-Marie Cadieux, Marc Fornier, Maxim Gaudette, Alexis Martin and François Papineau.

The constant shifts in tone and style – each sequence was shot by a different cinematographer, too – work nicely to keep the movie’s energy up and hold our attention if we’re not fully invested in a given scene, it won’t be long until the next one.

And if you’re not in the mood for an ensemble anthology, there are 16 other films to choose from.

Want something purely commercial? Check out R.A.I.D: Special Unit (Saturday, 7 pm), the new action comedy from actor/director Dany Boon (Welcome To The Sticks), in which he plays a French supercop tasked with training an enthusiastic but overeager new recruit (Alice Pol). People fall down, stuff blows up, you know the deal.

Rather see something darker? Odd Job (Monday, 4:30 pm), the final film from the late Pascal Chaumeil, is a bone-dry comedy starring Romain Duris as a laid-off factory worker who finds new purpose as a freelance assassin.

And if you’re looking for something truly avant-garde, there’s Lost In Paris (Wednesday, 8:30 pm), the new film from dancer/director/stars Fiona Gordon and Dominique Abel, who’ve carved out a fascinating cinematic niche for themselves over the last decade or so with L’Iceberg, Rumba and The Fairy.

Or maybe you’re just in the mood for a character study. I’d recommend the festival’s closing-night film, Marie-Francine (Thursday October 12, 8:30 pm), a gentle middle-aged comedy about a woman in her 50s (Valérie Lemercier, who also directed and co-wrote) who moves back in with her elderly parents after her job and her marriage both evaporate.

It’s not a new idea, but it’s well-made and the performances are solid … and, like most of the films playing in Cinefranco, this is likely the only time it’ll screen in an English Canadian theatre. Catch it while you can.