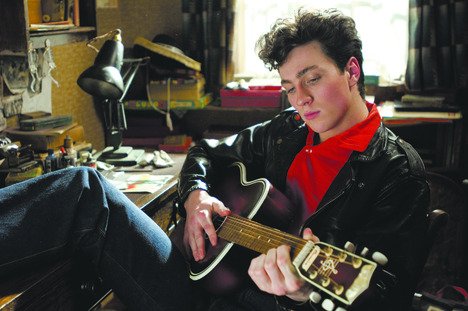 Johnson is great as the charismatic Lennon, but the film’s first act is slow – you’d lose interest if you didn’t know it was Lennon’s story, kind of like the first pages of a famous movie star’s bio.

Based on Lennon’s half-sister’s memoir, the movie does provide insight into his anger – and what drew him to Yoko Ono’s unconditional love. SUSAN G. COLE

Gruff Rhys, frontman for Super Furry Animals, traces his connection to South America’s considerable Welsh community in this endearingly idiosyncratic film that explores Patagonian musical culture through a deliriously eccentric lens. Cross-pollinating ethnographic documentary and long-form music video – and fusing it all together with shots of Rhys teleporting from Cardiff to Sao Paulo in a Power Rangers helmet – it’s defiantly weird and strangely heartfelt. NORMAN WILNER

As a compendium of archival footage of the Doors on- and offstage, When You’re Strange is an invaluable document, tracking the band from its earliest configurations to its dissolution within less than five years, with Johnny Depp’s mellow-toned narration helping the images flow.

But like every other Doors documentarian, director Tom DiCillo buys into the spectacle of Jim Morrison, shoving his bandmates into the background to concentrate on the singer’s spectacular downward spiral – played as a brilliant flame-out rather than pathetic, self-destructive overindulgence.

Ray Manzarek, Robby Krieger and John Densmore will someday escape Mr. Mojo Risin’s shadow and get their due as innovative musicians who changed the sonic landscape of the 60s. But not yet. NW