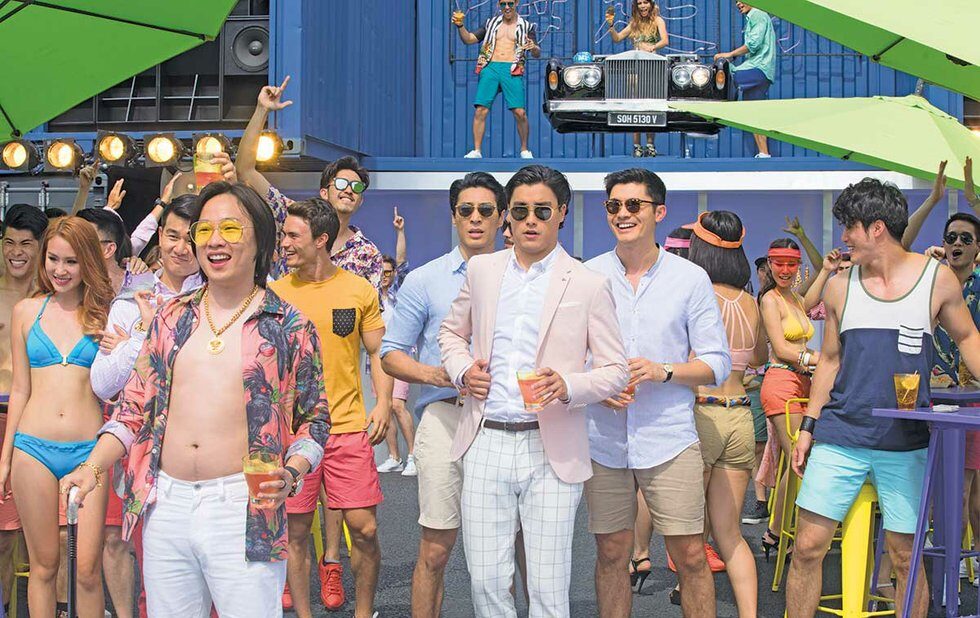 The big screen adaptation of Kevin Kwan's Crazy Rich Asians is cause to celebrate.

Glenn Sumi: Going into the Crazy Rich Asians film, we were both a little cautious. Why do you think that was?

Michelle da Silva: I guess I didn’t want to get my hopes up.

GS: Yeah. It feels like a lot is riding on this film’s success. The author of the book, Kevin Kwan, turned down a big offer from Netflix because he wanted to see the story on the big screen. If it bombs, well, that might send a signal to Hollywood that contemporary films featuring Asians don’t do well.

MdS: I was also cautious because of the title. I was worried about how Asians would be portrayed – as money-hungry, capitalist, over-spenders. In Vancouver, where racial tensions are high – partly due to rising real estate prices – a movie poster at a bus shelter was defaced with racial slurs. Some critics said the title of the movie was insensitive.

GS: I still wonder about that title. People who don’t know the book might think it’s only about designer labels and jet-setting. Those things are in there, but it’s more complex. I think without main character Rachel Chu (Constance Wu), an Asian-American from a humble background who finds out her boyfriend is super-wealthy when they travel to a wedding in Singapore, the film would be unbearable.

MdS: I agree, Rachel grounds the film and her shock and awe is ours.

MdS: I agree. It seemed almost weird at first!

GS: We’re used to seeing Asians – if at all – as the white lead’s friends. There’s a nice range of looks. The revelation to me was seeing such sexy hot Asian men on a big screen. They’ve been on TV – Daniel Dae Kim on Lost, Simu Liu on Kim’s Convenience – but usually we see nerdy comic relief types like Ken Jeong (also in this film in a great role).

MdS: Yes to so much eye candy! One of my favourite lines in the film is when Rachel’s former college friend Peik Lin (played by Awkwafina) says, “Wow, he’s like an Asian Bachelor.” It’s like, of course Nick would and should be a contestant on the Bachelor. Look at him! But there’s actually never been an Asian man on the show.

GS: Wait… even as a contestant competing for The Bachelorette?

MdS: Yes, there’s never been an Asian male contestant! Americans don’t see Asian men as desirable, I suppose. Which is why I found that line so funny. It was like a stab at pop culture and how Asian men are viewed.

GS: How did you respond to the theme of Asian parents and children, particularly of moms and their offspring. (The dads were virtually non-existent.)

MdS: I thought that in some ways, the non-existent dad thing is pretty realistic. When I was growing up, many of my friends had “satellite” dads who worked in Asia while their families lived in North America. I think that’s probably true within Asia as well.

GS: And everyone knows about the tiger mom figure.

MdS: True, which I suppose is what Eleanor Young (Michelle Yeoh), Nick’s mom, is. But what I like about her portrayal is that it goes deeper than that. She isn’t just a crazy, angry tiger mom for no reason. Deep down, she just wants what she thinks is best for her son and family. And this “family first, above all” mentality was learned and ingrained in her from her own upbringing.

GS: Yeoh brings such dignity and power to the role. She doesn’t have a lot of lines, but when she speaks, the others listen. I like how they slightly changed her character from the book.

GS: She’s a lot more scheming and melodramatic. In the film you see how she had to learn how to fit into this family and please her husband’s mother.

MdS: I like how even though Eleanor is made out to be the villain at the start, the audience eventually understands where she’s coming from based on her own struggles. I actually see a bit of my own mother in her. I called my mum right after the movie! I guess if the movie can convince Asian children to call their parents after seeing it, it’s good for something!

GS: Do you think the film would have been the same with a non-Asian director and creative team?

MdS: No, I think that made it authentic. There are so many subtleties in the film that I believe only Asians and/or Chinese might get. I don’t think a white director could’ve done the same. The attention to dialects, like which generations spoke Mandarin and Cantonese, was completely on point. The mahjong scene was also very elegantly done.

GS: It also feels like a nod to The Joy Luck Club, the last Hollywood studio film featuring all Asian leads.

MdS: True! I also liked how Chinese superstitions, like the lucky red dress and Rachel’s “auspicious nose” are included. Those things are so important in Chinese culture.

GS: I love the look of the film, which is simultaneously retro and sleekly contemporary.

MdS: And it makes Asian, or more specifically Chinese culture, seem really cool. It closes the gap between Eastern and Western cultures in some ways.

MdS: It’s reignited my desire to visit Singapore, to be honest.

GS: Do you think people will go see it?

MdS: I hope so. There’s so much hype around it. I have no doubt that Asians will see and support it, but I wonder if others will connect to the film in the same way. I’d love to see Constance Wu as a lead in a movie that isn’t Asian-specific. I never watched Fresh Off The Boat, so I was surprised by her acting chops and how likeable she was onscreen.

GS: Yes! And she held her own against the intimidating Michelle Yeoh. I think this will be a huge boost to Wu’s career.

MdS: I thought everyone was well-cast. They were actors first, Asian second, and not the other way around.