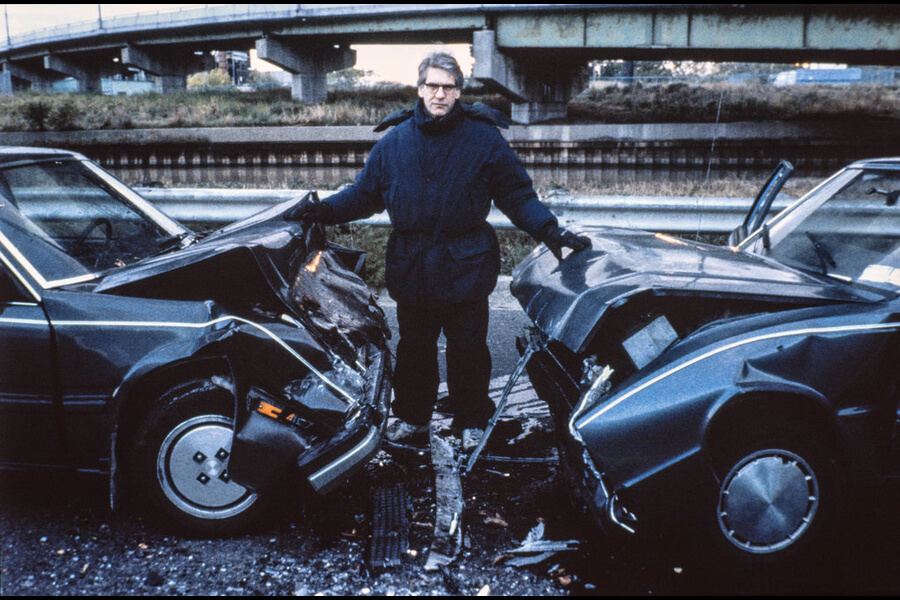 I would not have included “David Cronenberg’s Crash playing drive-ins in a new 4K restoration” on my list of 2020’s unexpected twists, but here we are.

As a tease for the theatrical re-release of the restoration later this month, distributor MK2 Mile End is holding a free screening of Cronenberg’s 1996 masterwork at the Docks Drive-In on Saturday (August 8). The event is in collaboration with Serendipity Point Films, Rue Morgue magazine and the Canadian cinema booster organization MADE/NOUS.

The show starts at 9 pm. Tickets – one per vehicle, occupancy capped at the number of seats inside – can be reserved here.

Awarded a special jury prize for “originality, daring and audacity” at the Cannes Film Festival, Crash – adapted from J.G. Ballard’s novel – follows James Ballard (James Spader) and his wife Catherine (Deborah Kara Unger) as they discover an enigmatic subculture of people who fetishize the injuries sustained in car crashes. Holly Hunter, Elias Koteas and Rosanna Arquette co-star as the literal auto eroticists the Ballards encounter on their journey into perversity.

Due to its subject matter, and to its makers’ absolute delight in stressing its more explicit aspects in interviews with skittish American media outlets, Crash proved an especially controversial release for Cronenberg. Ted Turner, who owned New Line Cinema at the time, hated the film and pressured the company to send it directly to video in the U.S.

Crash ultimately made it into a handful of American theatres months after its Canadian release, slapped with an NC-17 rating that limited its box office.

(Cronenberg personally oversaw an R-rated version for the eventual DVD release, trimming more than eight minutes of footage and pleasantly observing “it makes no sense.”)

The version screening Saturday – and opening in regular theatres on August 14 – is the uncut 100-minute release, freshly restored in 4K by Germany’s Turbine Media Group under the supervision of Cronenberg and director of photography Peter Suschitzky. You’ll be able to admire the Don Valley Parkway in all its utilitarian glory! Much of Crash was shot in Toronto’s east end, and it’ll be interesting to see how different the locations look nearly a quarter-century later.

The passage of time has also had the effect of slotting Cronenberg’s Crash almost perfectly into the director’s body of work. Like most of his projects, it’s a story of a community overrun by infection. It’s one of his most austere films, with the sex scenes doing more to reveal character and intention than the conversations. On repeat viewings, it also reveals itself as his funniest film.

And if the idea of watching this particular movie from the inside of an automobile strikes you as a little kinky… well, congratulations. You’re the target audience. And you probably already have plenty of hand sanitizer within reach.