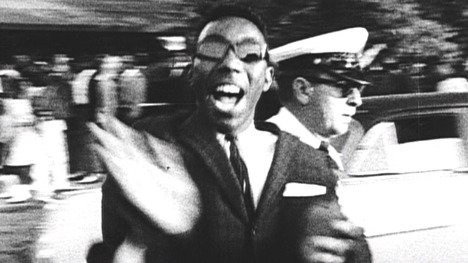 Time’s a tickin’, and bill guttentag knows it. That’s why the two-time Oscar winner (You Don’t Have To Die, Twin Towers) and his team decided to make Soundtrack For A Revolution, the impressive documentary about the American civil rights movement.[rssbreak]

“As powerful as the story is and as heroic as the people participating are, it’s a story that’s slipping from our memory,” Guttentag says, calling from California’s Stanford University, where he teaches, on the eve of the film’s Doc Soup screening. “I’ve shown the film to elementary schools and at America’s finest colleges, and there’s very little knowledge. It’s not that they’re bad students, but they were never taught it.”

The directing team decided to shoot contemporary artists singing the freedom songs precisely so they could draw that younger audience.

In the process of interviewing 60s activists, Guttentag learned how key a role the songs played in motivating the freedom fighters.

“Music is part of the DNA of the movement,” he explains. “As soon as we started interviewing people, they started to sing the songs. That’s because they sang on the marches, they sang at Martin Luther King’s funeral – they sang all the time.”

The film does not, however, dig deeply into the origins of the songs or the place of Negro spirituals in the movement to end slavery in America. When I mention this, Guttentag gets a bit testy.

“Look, this is an 82-minute film telling a huge part of history,” he says. “Yes, I could have talked to musicologists about the origins of the songs, but I chose to talk to the people who were there, who could say to me, ‘I remember how I felt as the police came at me.'”

And the filmmakers deliver stunning archival footage to back up these testimonials.

“We had a team of people who did nothing but look at historical footage,” he says. “It was a constant quest for the best stuff and new stuff.”

There is some new material, including King’s mug shots that turned up in a police officer’s locker and footage of the freedom riders’ bus bombings. As for the material previously seen, it looks spectacular.

“In part, that has to do with the march of technology. Stuff that wasn’t available or affordable is now available, and we spent a lot of time restoring the footage, so you see shots that have never looked as good as this before.”

Guttentag says documentaries are a growth industry that shows no sign of flagging.

“People are interested in documentaries. It shows at the box office and in the popular press. In a fiction film, you can separate yourself from the action. You know it’s an actor who’s going to go home after he’s finished, go to a bar and then show up on the set the next morning.

“With documentaries, when you see real events – the horror at the bridge in Selma, King’s tragic end – it’s harder to separate yourself.