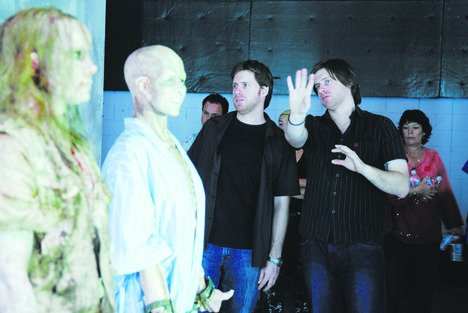 The first time Peter and Michael Spierig came to Toronto, they shut down the Uptown Theatre – literally.

Their low-budget Australian splatter romp Undead was the Midnight Madness closer at the 2003 Toronto Film Festival, and the very last film to screen at the multiplex before it was demolished for a condo development. (The send-off was memorialized as a special feature on the Undead DVD.)

Their return trip found them opening the 2009 edition of TIFF’s Midnight Madness with Daybreakers, a near-future thriller set in a world where a plague has turned most people into vampires. Ethan Hawke plays a conflicted scientist who sides with the human resistance – led by Willem Dafoe – against evil corporate bloodsucker Sam Neill.

It’s an inventive, entertaining exercise in genre subversion – and the audience drank it up. The day after the premiere, they’re exhausted. Happy, but exhausted.

“I don’t recall getting any sleep,” says Michael, looking exactly as bleary as his identical twin and filmmaking partner, Peter. “But it seemed like the audience was really into it, and the reactions were what we were hoping for, so it was fantastic.”

“I was nervous as hell,” Peter says, “because we’ve worked on this film for six years and this was our first public screening. So I was terrified. I didn’t see a lot of people get up and leave.”

The logical question: what took them so long to make a second movie?

“The process of writing a film like this takes a long time,” explains Michael, “because you need to really explore this completely fabricated world. It needs to be true and real, but also you need to have fun with it, so you have to try a whole bunch of things and figure out what works and doesn’t work.”

“We had so many things we didn’t use,” Peter says. “There were so many moments and ideas we had to hold back on simply because we didn’t have the time. We kinda had to come back to what the story was about, and the people.”

Once the script was written, the casting fell into place.

“Ethan was the first one to read it,” Michael says, “and once he said yes, it kind of legitimized the film, and we could go after all those other actors we’d thought there was no chance in hell of getting. ‘Gee, let’s try for Willem Dafoe!'”

With Daybreakers in the can, the brothers aren’t planning to wait another six years for their next picture, another interesting project.

“Captain Blood,” Michael reveals. “Only it’s not a swashbuckling pirate movie any more. It’s a pirate movie set in space.”

“I love it because it’s a remake in the best sense, in that you’ve taken the original idea, completely twisted it and put it in a new genre,” says Peter. “It’s not the Errol Flynn movie, but at the same time it has that flavour.”

There’s also the possibility of a follow-up to Daybreakers, should the movie be as big as its producers hope.

“We don’t wanna jinx anything,” Michael says. “There’s been a brief discussion about it, but we all said, ‘Let’s not discuss it until we know how it’s playing.'”

“It’d be great fun to explore that world a bit more,” Peter says. “There’s plenty of material there, and plenty of things we’d love to do.”[rssbreak]

Michael Spierig on the advantage of having a studio in their corner:

Peter Spierig on casting Australians as well as Americans: