The Drag Race stars on their move from YouTube to Viceland, boring celebrity culture and why Kellyanne Conway is the opposite of a drag queen 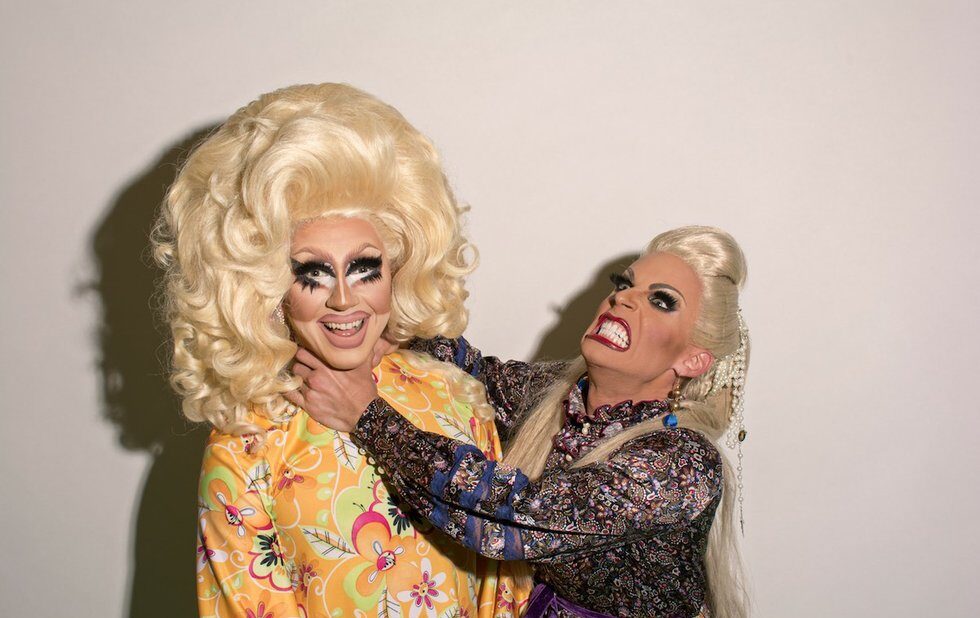 Having a three-way with drag queens Trixie Mattel and Katya Zamolodchikova is not easy.

Both are late, and while Trixie and I are chit-chatting about an acoustic performance she is doing for TV industry types in Los Angeles that night, Katya arrives in a flurry of static and background noise that sounds like gale-force winds and screaming.

Both immediately blame me for the chaotic atmosphere.

“We need to talk about Kevin,” Katya says, sternly.

By the way, this is a conference call and it’s technically a four-way because a publicist from Vice is also listening in. The occasion is the launch of The Trixie & Katya Show, which premiered on the cable network Viceland in November.

After appearing on season seven of the cult reality series RuPaul’s Drag Race, the contestants-turned-comedians became fan favourites, touring with other queens from the show and starring on subsequent seasons of its All-Stars spin-off series (Katya was on All-Stars 2 and Trixie is on the upcoming All-Stars 3).

They’ve also become frequent collaborators, most notably as co-hosts of the YouTube series UNHhhh, which is like Beavis And Butthead crossed with Kathie Lee and Hoda. Their Viceland talk show is essentially the same concept as UNHhhh but with upgraded production values.

As cartoonish graphics appear around them, the pair riff off each other at rapid-fire pace, discuss the episode’s theme (such as death and hooking up), have fun with campy green screen effects and do comedy bits. They even appear out of drag as their male alter egos in man-on-the-street segments.

Talking to them, it is clear they have chemistry. Both feel like outsiders in the gay world. They also play well against one another, following up each other’s answers with improvised quips, jabs and shady laughter. Though Viceland is a new network in a difficult landscape for traditional cable (Rogers is reportedly considering cutting ties with the channel in Canada), their series nonetheless feels like a step forward: it’s a comedy show that happens to star drag queens on a network that isn’t expressly aimed at LGBTQ audiences.

How did going from YouTube to Viceland change the way you do the show?

Katya: We tried to think about what’s funny and not just gay and funny or Drag Race adjacent and funny.

Trixie: I’ve been describing it like this: me and Katya have been doing Double Dutch with our friends and all of our friends are little nine-year-old girls who have braids in their hair. But for our brand new audience who hasn’t been jumping with us, we’re slowing down the rope a little bit so people don’t get whipped in the eye.

One of the episodes is about death. What are some other topics?

Katya: We talked about fear and anxiety, which is very relatable and not just to gay folks.

Trixie: Because we’re gay and we’re drag queens, we’re expected to talk about things in a certain way. We recently got a request for press that was like, “I want Trixie and Katya to give tips on their best blow jobs.” I was like, “Who wrote this? And who wants this?” No one.

We like to put on corsets and pretend we’re actual comedians even though at the end of the day we’re two bad episodes from going back to doing cartwheels for bachelerottes.

Drag Race seems like training for a career in entertainment. What opportunities has the show afforded you?

Katya: It’s all modeled after RuPaul’s entertainment career, which is multifaceted. It’s like RuPaul’s school for girls: How to sing, how to dance, how to tell a joke, how to play a character, how to record an album, how to be yourself.

Trixie: What makes drag queens so interesting is, from our origin, we’re expected to do everything. Katya and I are on a press tour and it’s us getting ourselves ready, calling our own Uber. If you’re a real celebrity the threshold of what’s expected of you is so low.  Someone is there to get you ready and tell you exactly what to do.

Katya: We were on Watch What Happens Live with absolute major Hollywood stars and they were the most boring people I’ve met in my life.

Trixie: They were nice but we were sitting there marveling. Like, this is what is expected of you? If you’re a drag queen you have to be on fire at every moment or else no one likes you.

Katya: And you also have to be on fire back to the airport where you buy your own flight.

Trixie: You also have to set yourself on fire.

You can’t just show up on tranquilizers with 10 assistants.

Katya: We’ve done that too.

You’re not at all interested in going to parties full of celebrities?

Katya: I’m personally not. I would have to be a fuckin’ mess.

Trixie: Neither of us are partiers. Part of what makes our voices unique is we are outsiders within a community of outsiders.

Has Drag Race expanded that community?

I read an article once and it was like, “Things all gay guys should do once in their life” and one of them was “do drag.” I’m gonna stop you right there, Stephanie. I don’t think everyone should do drag. It’s a very unique thing to want to do.

Katya: Not everybody needs to be a weirdo.

What keeps you both doing it?

Trixie: I can’t do anything else at this point because I don’t remember long division. When you’re in drag and doing comedy you get to go down avenues that maybe aren’t so okay as a white man in America. Plus I’m so stunning in drag it’s hard for anybody to take me seriously.

Nan Goldin has said she loves photographing drag queens and children the most because they are similarly unfiltered.

Katya: Drag is a chicken suit and you’re very emboldened. Whatever you do or say or fail at or succeed at is attributed to your costume and not you as a person. So there’s a lot of freedom.

That’s why I’ve fucked men when in drag so many times because if they reject me I just take off the chicken suit. Eat shit and die, bitch!

I liked the episode where you trade stories about getting laid in drag.

Katya: Oh, I could write a book about that! I actually am sort of writing a book about that. I had a register of sex – what’s the opposite of offender? – a register of lovers that I recorded and would ask different questions to suss out their sexuality. The results are fascinating. Men are fucking crazy and also really simple.

And, get this, bitch: men are so freaked out they’ve developed an app that if you take a picture of a woman with makeup it tells you what they look like out of makeup. How fierce is that? That’s so ridiculous. There’s a lot of stupid men out there who feel like makeup is a betrayal of the truth and that is so funny to me.

What do you think about the recent trend of celebrities doing no makeup on the red carpet?

Katya: I say go for it, but it’s a complicated issue. Women have to remember what’s good for them is not good for every woman.

Trixie: We were at a show this weekend and Katya said, “I don’t think I’m gonna wear lashes” and a chill ran so fiercely down my spine that I’m now paralyzed on the left side of my face. So I have different opinions on how much makeup people should wear.

Then again, if makeup stops being a celebration of your own physical attributes and starts being a chore, you should stop wearing it. It’s about your personal relationship.

Katya: There’s a very serious fascistic element to it. There are gatekeepers that resent faces being recorded if they are unfit for camera. You look at the news these days and those whores are painted. They. Are. Painted. Fucking. Whores.

Trixie: Oh my god, L.A. news is like hard nipples and a fake ponytail. It’s pornographic.

Katya: In their halters and their blouses.  It’s for real: they are full-on drag queens. And then you look at Amy Goodman on Democracy Now! who literally has a witch wig and no makeup. So, it’s like, hysterical.

Trixie: And then you look at [President Trump’s advisor] Kellyanne Conway and she looks like that cousin at a wedding who declines getting her makeup done because she’s a Mary Kay representative.

Trixie: “I’m 75 and that’s okay, but I’m going to accentuate the worst parts of it by wearing my hair and makeup in the most Halloween way.”

Katya: Kellyanne Conway is a true Halloween bitch from hell.

Do you consider her a drag queen?

Katya: She’s the opposite of a drag queen because she doesn’t tell any truth.

Katya: She’s too real to look at and too fake to listen to.

Trixie: Pee-Wee Herman is a drag queen. He uses costume and makeup to project a different age and persona. That’s no different than drag.

So has drag gone mainstream?

Katya: We have a painted fool as a president with a spray tan and a wig so I think we’ve already passed that point. RuPaul is the real president of the United States, so let’s just get that clear.

Trixie: Katya said the other day that drag isn’t mainstream, but it’s popular.

Katya: It can be popular and a subculture at the same time. We have been saddled with the responsibility of providing a moral centre, as absurd as that is, because there is this vacuum of morality in America. So RuPaul has become the default president. She is the only one in popular media who has maintained a consistent message of compassion, love and togetherness – more than Obama did. RuPaul never lies. They’ll criticize her for being repetitive, but the message is always the same because it’s the truth. Drag Race will never be popular because it’s counterculture. It always has to be the small guy on the outside critiquing the big guy.

Trixie: Do I want everyone to tune in and watch it? Yes. You want a good turnout at your birthday party, but you don’t want everyone you’ve ever met there. I want drag to be cool and respected, but I actually don’t need everyone to like it.