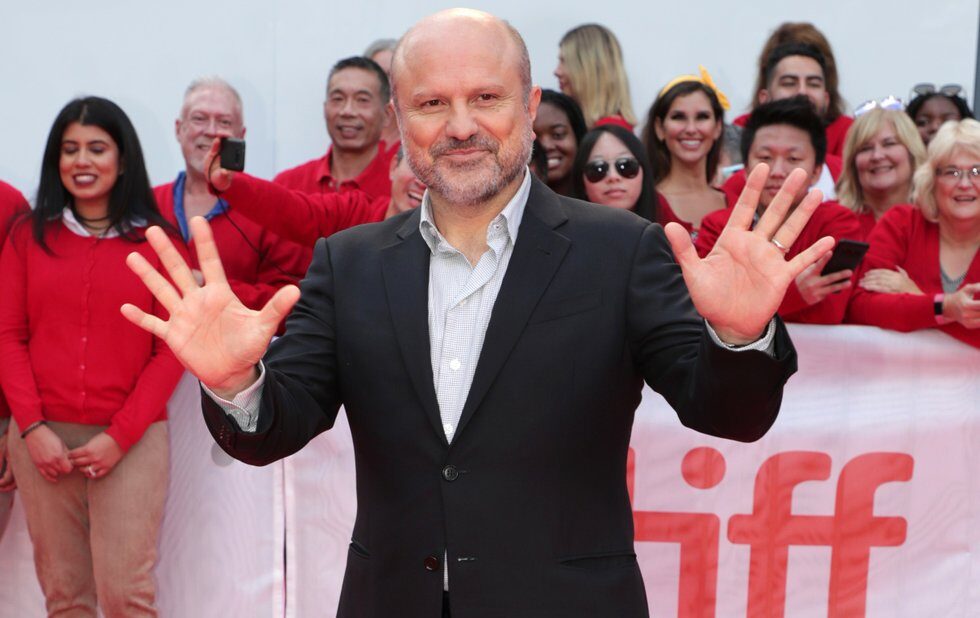 Not content with having played one of the greatest TV parents of our age, Enrico Colantoni is now co-starring with America’s Dad, Tom Hanks, in Marielle Heller’s A Beautiful Day In The Neighborhood.

The Toronto native plays Bill Isler, the president and CEO of the Fred Rogers Company, who serves as the go-between between Hanks’s Fred and Matthew Rhys’s (fictionalized) journalist Lloyd Vogel. It’s not a splashy role, but Colantoni is perfect for it: tempering his warmth with a protective streak, the actor lets us understand what Fred Rogers meant to his colleagues and friends. He’s telling us – and Lloyd – that it’s okay to trust the guy.

The day after the film’s TIFF premiere, we sat down to talk about trust, goodness and a few other things.

There’s a theme that runs through A Beautiful Day In The Neighborhood about how we’re inherently distrustful of good people, because they must be up to something. Joanne Rogers rejects the idea that her husband is a saint, because that implies no one else could do what he does – and it lets people off the hook for not trying.

When I read the script, I was feeling shame. Because I felt the same way. I thought, “If Jesus Christ knocked on my door today, I’d tell him to fuck off.” I would shut the door in his face, because I wouldn’t recognize the message. I’d be cynical I would think that he’s crazy. And yet, it’s the one thing that we yearn for more than anything else. We blame the world and the mess it’s in and think we need a saviour. We need somebody to come in and clean it up. But we wouldn’t recognize it. We wouldn’t know what to do with it. We would crucify him. [laughs]

That’s how it’s usually gone in the past, with people who preach peace and love.

Yes, Fred Rogers was a Presbyterian minister, but he didn’t define himself like that. He was active. He was about loving-kindness. He activated love, and that’s it – which was the message 2,000 years ago and 5,000 years ago and how many thousands of years ago, you know what I mean? And it was difficult for him.

It seems like we’re really feeling his absence now, culturally. There aren’t a lot of good people in the news these days.

Isn’t it all cyclical? We’re talking about how shitty things are now, but we forget. I grew up in the early 70s. I didn’t know what the world was really like, and it was probably a shithole then, too. Vietnam was going on, they were gonna impeach the president – there was shit going on. So are we starved for that kind of voice, that kind of leadership, in the father figures that we want? Maybe.

You’re playing Bill Isler, who’s depicted as a sort of guardian for Fred.

He was the keeper of the gate. He was present, but not in your face. And that’s what Bill will tell you. He’ll always say, “It was never about me, it was always about Fred. I always stood in the background, I always made sure that the bills were paid and everybody else was taken care of. But I never concerned myself with what was going on in there.”

Bill doesn’t get a lot of screen time – the movie’s focus is almost entirely on Fred and Lloyd – but we get to understand him pretty well, I think.

[Heller] got that, and just put in the little bits. I’m becoming more aware of how good she was at that, because there are a few scenes that she cut that I don’t miss. The more time I spend with what she put in the film as far as my performance, I’m like, “Thank you. Yes.” [taps table] Bill would be proud.

The tapping thing – is that you or him? I noticed it happens a couple of times in the film.

Here’s the thing I love about Bill: When I met him, I knew I didn’t have to do so much. He grew up in an Italian neighbourhood, so he’s always talking with his hands, you know? He’s always very touchy-feely, he’s just that kind of guy. And so I sort of channelled that and made it easy on myself, so I couldn’t NOT use my hands. And just meeting him in one afternoon was just like, “Hey man!” It’s all just touchy-feely and grabby.

And to continue my religious metaphor, he feels a little like Fred’s apostle.

That’s right. He’s got an understanding of the man he doesn’t judge him. He just lets Fred be Fred – just don’t fuck with him. “Don’t think you’re going to come in here and smear him, because he’s unsmearable. You might be mean about him, you might take a shot at him… and I’m not gonna let you do that.”

There’s a moment where Bill physically steers Fred through a crowd of fans, and it’s like you and Tom Hanks are doing this little dance – it’s somehow both graceful and professional.

Yeah, we had to do all that. And the wonderful thing about working with Mr. Hanks was, he was still Tom between takes. I mean, we had a very unfortunate incident where our sound guy died in an accident while we were filming.

Yeah. And the next day, we all gathered to grieve in our little hotel, and Tom was there and his daughter was there, and he wasn’t saying “I gotta still be Fred Rogers.” I hate to compare it to, you know, something like Daniel Day-Lewis would do….

The total Method immersion in a character?

But he can bring so much power when he needs to. There’s that scene in the diner when Fred asks Lloyd to just sit in silence with him, and the camera just holds on Hanks’s face, and he’s so still…

You know what, that was the most impressive thing about his performance. When I was watching him live, I never saw what he was doing on camera. And then [in the footage], I was just like [whispers] “Look at that. That’s a film actor.” He possesses all the qualities of all the great film actors from the past. Humphrey Bogart, just one little look and boom. Just one subtle look. I’m still trying to figure that out, man.

Ah, you have your thing.

Well, thank you, I appreciate it. But you know, to have those moments of just stillness… even Matthew [Rhys] had those some of those beautiful moments where you wanted him to burst into tears.

It does feel kind of daring, at this point, for a movie to just sit and watch people figure themselves out and decide to be better.

And how difficult that is for all of us. Lloyd is so much of our journey, you know, how we need to break down the walls and really come back to consciousness, and not be distracted by everything else out of fear or desperation. We want to be loved, but we go in the worst ways to get it. We think it’s everywhere but where we are. “Where is my friend? Will you be my neighbour?” It’s the things we want, but we’re just so afraid of.

It’s what Fred Rogers always believed, isn’t it? If you understand your fear, you can move past it.

That’s what he said: “What we can mention is manageable.” Yeah.