The filmmaker discusses trusting the audience, collaborating with Joaquin Phoenix and how the movie may have inspired novelist Jonathan Ames to write a sequel 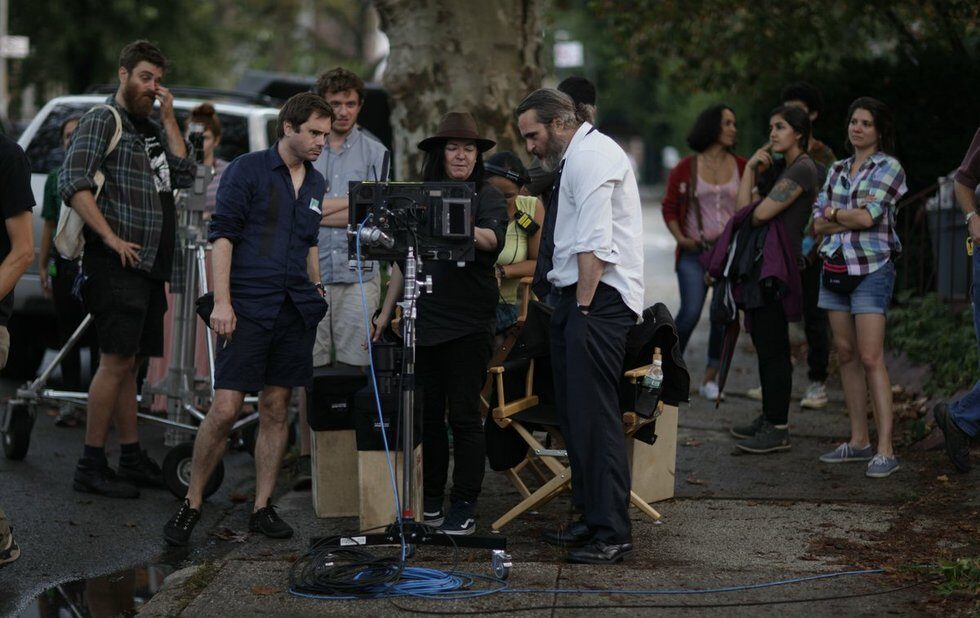 Director Lynne Ramsay (centre) on actor Joaquin Phoenix (right): "theres a total commitment to the process and working with me and understanding where to go with it and try to elevate the material and make it interesting to both of us."

Director Lynne Ramsay (centre) on actor Joaquin Phoenix (right): "there’s a total commitment to the process and working with me and understanding where to go with it and try to elevate the material and make it interesting to both of us."

Lynne Ramsay is in New York, where she shot You Were Never Really Here two years ago. But she’s not staying when we speak, she’s in a car on her way to the airport, going home to Glasgow after a long press tour for the film.

You Were Never Really Here, which opens in Toronto this week, is ostensibly a thriller in which Joaquin Phoenix plays Joe, a hollowed-out operative who specializes in rescuing children from the people who would do them harm. But like Ramsay’s other movies, Ratcatcher, Morvern Callar and We Need To Talk About Kevin, it’s really an impressionistic study of a person in crisis, and very different from the original novella by Jonathan Ames. We talked about that, and a few other things as well.

You Were Never Really Here is basically a deconstructed revenge movie, removing almost everything we expect from the genre – the set pieces, the dialogue, the nuts and bolts of the conspiracy our hero is up against. What made you decide to take this approach?

I’m a big believer in cinema, you know – what it used to be? Images and sound, and working it out a bit. I find it exciting watching films where I just go into an impressive world. And this was always an exercise in less-is-more, and trusting the audience. I think audiences are pretty sophisticated, especially these days, so it became really a character study, and I was hoping that people would enter Joe’s world: see the pieces and join the dots.

Joaquin Phoenix’s performance is the key to that – he’s doing so much within that minimalist approach. It even feels like Joe’s body has its own backstory, with its scars and this weird thickness that suggests muscles starting to go soft. He moves with purpose but we can see the effort – he’s like a tank.

It was kinda him becoming this beast before my eyes in prep. You know, like watching the Hunchback of Notre Dame come alive. The way he walked, the physical thing – I mean, everything we tried to do was to cut away the clichés that can be so easy in these movies, and try to strip [the story] back and find the man at the core of this. The way he built [himself] up was body armour for Joe, and I think that makes him more terrifying – but it makes him more vulnerable, in a way. These guys in these films, they’re [usually] like superheroes – you know, they have a six-pack and they save the girl. We kind of turned that upside down, and I think he’s more human for it.

The film is a radical reinterpretation of Jonathan Ames’s novella, which is a lot more conventional. And it struck me that your previous films, Morvern Callar and We Need To Talk About Kevin, take similar liberties with their source material.

I guess I’ve never really done a straight adaptation. It’s been more like “in the spirit of,” you know? Jonathan’s just seen [the film] for the seventh time, and I think he really enjoys it as this other thing that it became during the scriptwriting process.

That sounds like a good way to approach it.

Jonathan told me he’s thinking about writing another book [about Joe]. He might do that.

One thing that was definitely really rewarding in this was that we created an amazing character with really different pieces. And I can kind of see why he’d want to develop the character even more. Joaquin just came in and made [Joe] more and more complex, and more and more human, and Jonathan’s now inspired by what he was in the film to go back and write it.

When that book is done, would you and Phoenix be interested in making that movie?

Well, I love Joe. I love this character, I love what we brought to life. I felt very excited making that film. Every day we’d always question every single thing. It wasn’t like we’d shoot the script, it was, “Let’s go beyond what it is, and see that character start to grow, become three-dimensional.” It goes way beyond the novel, to the point where you can’t imagine Joe played by anyone else. I’m really lucky to work with such special actors. A lot of people just turn up a few days before [the shoot] this guy, there’s a total commitment to the process and working with me and understanding where to go with it and try to – you know, really elevate the material and make it interesting to both of us. It’s a special thing, which I hope comes across in the movie.

You do seem to bring out the best in your actors. Samantha Morton in Morvern Callar, Tilda Swinton in Kevin, Phoenix here. I get the sense, watching those films, that there’s nothing they won’t do for you.

I’ve just been so lucky to work with these incredible actors. We don’t rehearse, normally, but we really investigate the characters. It was very hard to cut Samantha Morton she was so [deep] in character. The same with Joaquin and Tilda, as well. Tilda would say things like, “Show the worst aspects of my body. Show my back fat. I want to be authentic.” Samantha Morton came in and saw this film a couple of weeks ago, and I think she described it as well as anyone has: she said it was like a Francis Bacon painting. “You’re inside this headspace that’s such a flood of emotion.” She was really affected by it.

You Were Never Really Here premiered at Cannes almost a year ago. Are you working on anything now?

Loads of things. It’s about finding that beautiful thing where you know two years down the line you’re still going to love it. I’ve got lots of exciting things I’m thinking about right now, but I just want to go back to the place where I wrote this – where I can maybe start to think about the next one. I’m just looking forward to getting back to writing after this [press tour]. It’s been a long time, in terms of it being released in all these countries. It has a bit of a life cycle. [laughs] It’s kind of like You Were Never Really Finished.