A little rough around the edges, Leslieville's former Projection Booth reopens with a new name and a DIY mission statement 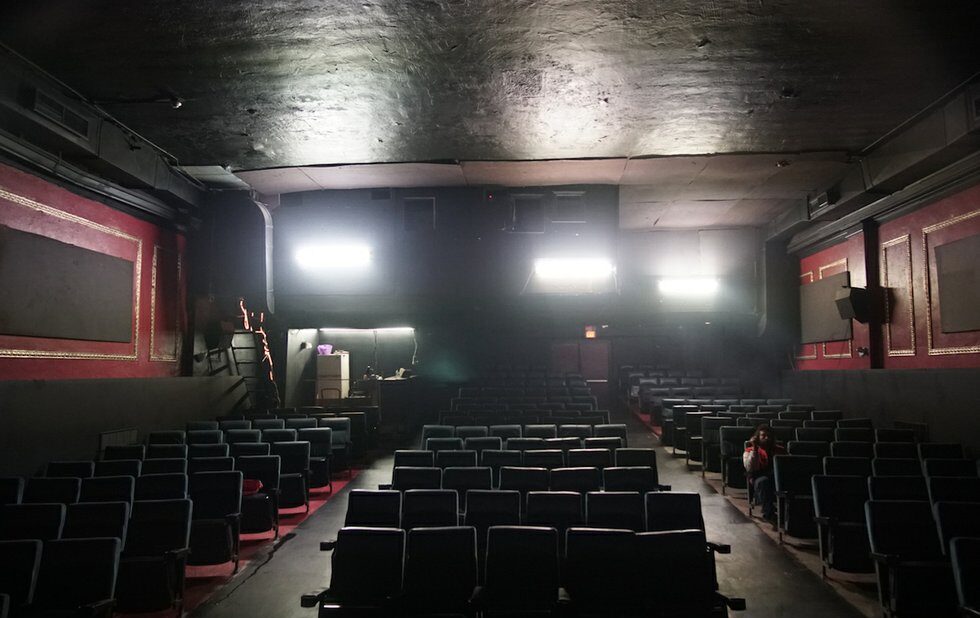 If you’ve spent any time in Leslieville recently, you might have noticed some activity around the little neighbourhood cinema on Gerrard East, near Jones.

Originally opened in 1911 as the Bonita, the theatre has had a number of names over the decades. In the 40s it was the Gerrard in the 60s, it screened Greek movies as the Athenium. In the 80s and 90s it was a Tamil-language venue called the Sri Lakshmi, and in 2011, after a long hiatus, it opened as the Projection Booth, an indie cinema specializing in documentaries and genre films.

In 2013, a dispute between the Projection Booth ownership led to the theatre closing and reopening as the Big Picture Cinema that didn’t last very long either.

But now, the venue is opening up again, with new management – producer and concert booker Matthew Almeida and filmmaker Kalen Artinian – a new programming mandate that encourages live performances as well as film screenings, and a shiny new name: the Grand Gerrard.

Actually, the name might be the shiniest thing about it at the moment.

“It’s still very much a DIY venture,” Almeida says. “Like, I’m going into this with not a lot of money. Month-to-month we’re sort of putting back in what we get, fixing things up as it goes.”

Almeida says he wasn’t looking to launch a theatre, exactly. He knew the venue from the Projection Booth days, when he ran The Dark Side Of Oz evenings and some other live events. “We were the ones who started to bring in the raves and all the 420 stuff.”

Almeida’s events came to an end when the owners fell out, and he went on with his own projects until he found himself back in the neighbourhood last fall.

“I was location managing a TV show for CBC and we happened to be shooting at the Vatican Gift Shop, which is down the street,” he says. “I saw the owner, who I hadn’t seen in years, just sitting in the theatre. I was just like, ‘Hey man, what’s going on in here?’ And he was like, ‘Nothing. But you should do something!’

“We were just going to do a pop-up for April, and I came in and had a look at the space with my buddy who’s a contractor. We were like, ‘Oh let’s just start fixing it up a little bit,’ and then once we started sneaking in to work people kept coming by and being excited about the theatre. We just decided to go for it.” 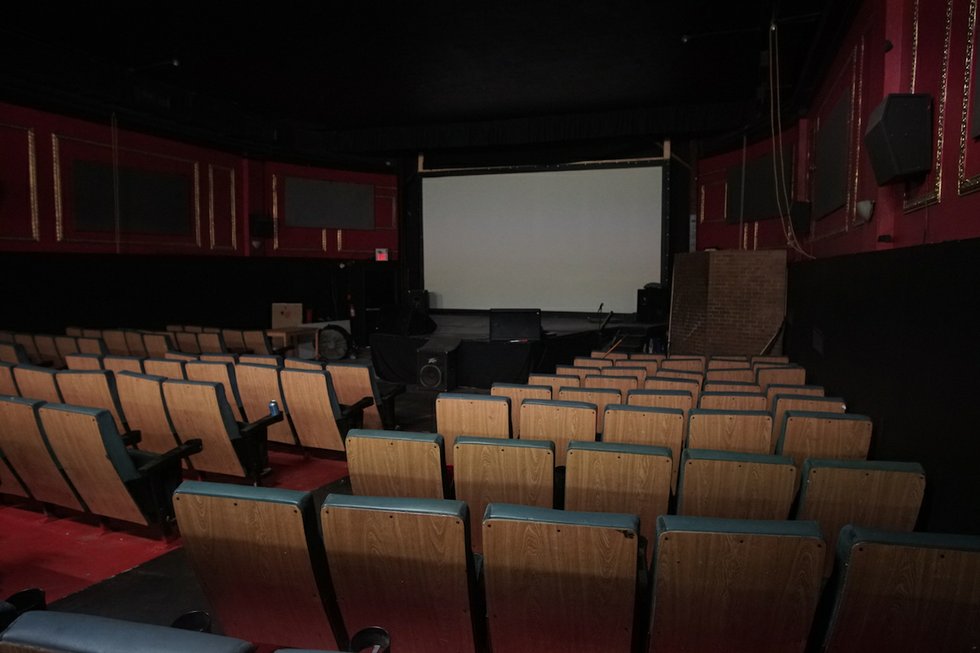 The Grand Gerrard has a digital projector and a 35mm projector that new manager Matthew Almeida is keen to get up and running.

The Grand Gerrard launched informally earlier this spring, with a smorgasbord of screenings including Joyce Wong’s indie drama Wexford Plaza, Charlie Chaplin’s The Gold Rush and a 420 movie marathon of Cheech & Chong’s Up In Smoke, Harold And Kumar Go To White Castle, Friday and The Dark Side Of Oz (the pairing of the 1973 Pink Floyd album The Dark Side Of The Moon with the 1939 film The Wizard of Oz). The Big Lebowski screened with live music (and a food truck outside). And suddenly it’s May and there’s a full slate to program, and four seats still need to be fixed.

“I was thinking I was going to do little events, build up a little bit of a following and slowly fix things up,” Almeida laughs, “but I’ve had people coming at me like crazy to use the space. I’m trying to get it up to as nice a standard of theatre as possible. Again I come from a punk rock background, so I just needed a punk rock theatre. I mean, the Paradise has been trying to rebuild for seven years – we reopened this in two weeks.”

Fortunately, getting hold of materials to refit a movie theatre hasn’t been too difficult.

“I’ve been getting a lot of donated stuff,” he says. “I got a brand-new screen, and the Rockpile in Etobicoke just replaced their old soundboard with a digital [model], so now I can do, like, big theatrical productions or big live touring acts. I haven’t had to spend a penny on any of that. And then on top of that I used to be a part owner of a club called Nocturne that closed last July so I had all the sound equipment from there. Everything just kind of timed out to result in this.”

I ask Almeida what the Grand Gerrard’s ideal balance between film screenings and live performances.

“The balance I haven’t quite figured out yet,” he says. “I’m a film producer as well, so I want to make film happen here as much as possible, [but] I’ve been in the music business for a long time, so I know I can lean on concert stuff to make sure our rent gets paid every month. That way we’ve got a bit of time to figure out how to program movies in here as frequently as possible.

“We have some good rep screenings, but I’m really trying to make it a space that’s easily accessible for indie filmmakers,” he explains. “We’re getting a lot of short film releases, indie film premieres – stuff that you might not have the money to book The Royal for, stuff that’s really low-budget.  I have Troma doing stuff every Tuesday. We already did a No Budget Film Night we’re sort of playing up on the punk-rock nature of it. I’d like it to be presentable for bigger films as well as time goes on.”

It might also take a while to get the theatre’s 35mm rigs up and running. One of the paired projectors seems to work. The other one, not so much.

“I made sure the light bulb works, but I haven’t actually tried running it. I’d have to operate off one [projector], switch the reel and have a big pause in the movie, or find a way to get the other one running.”

The Grand Gerrard has a digital projector, but Almeida’s especially keen to get 35mm projector working so he can screen all the prints he and Artinian found in the theatre’s basement.

“It looks like it’s all Bollywood stuff, so we’re going to start having Bollywood From The Basement screenings,” he says. “As soon as some money comes in, we’re going to see what we find on all of those reels.” 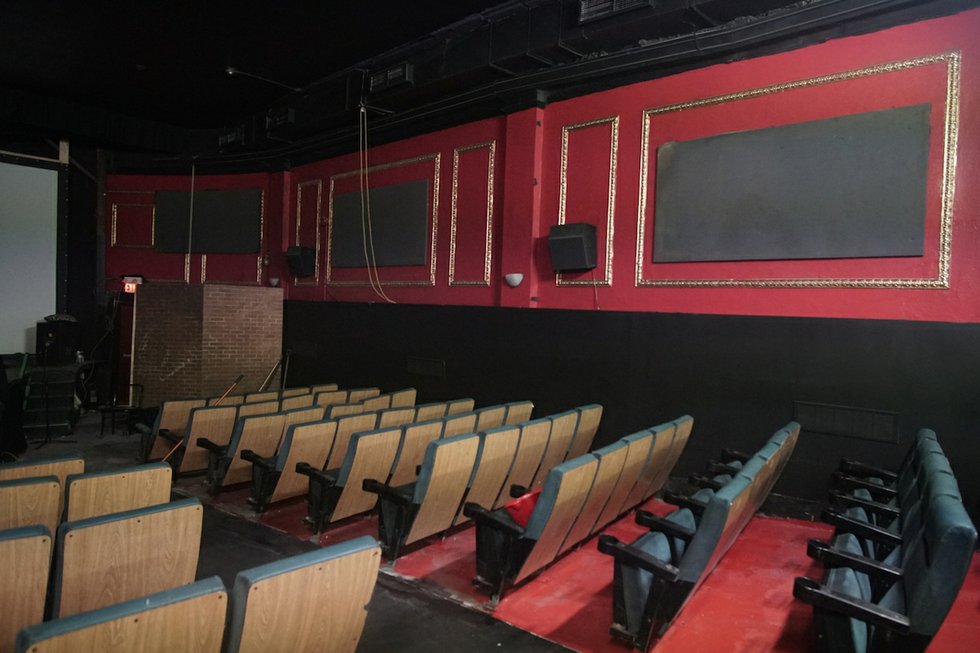 Originally opened in 1911 as the Bonita, the theatre has had a number of names over the decades.