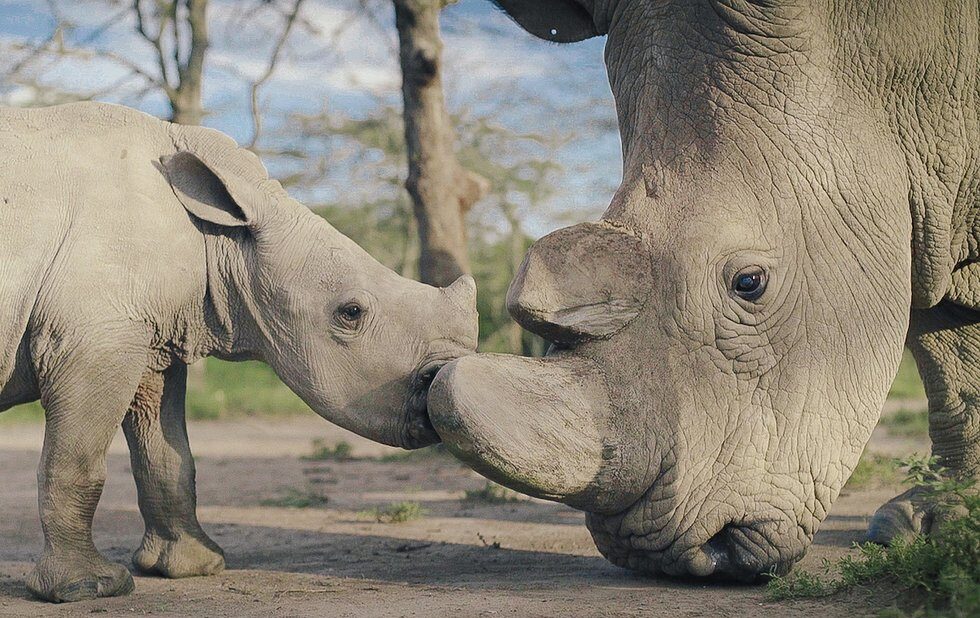 Are we just here to be stewards of the Earth and all its creatures? (Whoever wrote the Bible seemed to think that was important.) Does being a keeper of animals mean protecting them, or holding them in perpetual captivity? What about working animals who do more for us than we can for them? Can we simply coexist with other species? And what about fish? Fish are weird.

The features and shorts in Animal Magnetism aim to explore “the complicated relationship between humans and animals,” constantly re-evaluating what that means from multiple perspectives.

One offers a god’s-eye view of life and death in Portugal another gets so close to its South Korean subjects we can almost smell their dander. And a third seeks the middle ground between humans and rhinos in Kenya.

As with all art, we bring ourselves to these stories, wondering how we’d respond to the specific challenges and what that says about our own capacity for empathy. (I’d probably do less well with the fish.)

I was struck by the ambition of Tiago Hespanha’s Campo (April 25, 5:45 pm, TIFF 3 April 26, 12:15 pm, Scotiabank 3), an austere vision of life on the Alcochete shooting range outside Lisbon, where the Portuguese military hone their skills in view of sheep, bees and a few other creatures who only emerge at night, reclaiming the space after the machine gun fire stops.

With a voice-over of mythological quotations and observations from Kafka and Carl Sagan, among others, Hespanha slowly builds a meditation on nature’s indifference, both to the humans playing their war games and the animals around them. Soldiers work to become more efficient killers a shepherd works even harder to save the life of a breeched lamb. It’s poetic and tragic and beautiful, machine guns and all.

Coexistence is an issue in Ljubomir Stefanov and Tamara Kotevska’s Honeyland (May 2, 3:30 pm, TIFF 2 May 3, 6:45 pm, TIFF 3 May 4, 3:30 pm, TIFF 3) as well. It chronicles the efforts of a beekeeper in Macedonia to live in harmony with the bees whose honey provides her livelihood, and the arrival of a new (human) family that threatens that balance.

Mincheol Wang’s Garden, Zoological (April 26, 5:30 pm, TIFF 4 April 27, 1:30 pm, TIFF 4 May 5, 3:30 pm, Scotiabank 13) looks at the relationship between the employees of South Korea’s Cheongju Zoo and the animals in their care. People love the animals the animals seem to return the affection, with the possible exception of this one young seal who’s kind of a dick.

But this is a zoo, not a preserve, and on some level zoo staff know they’re not doing right by these creatures. Wang doesn’t shy away from that awful contradiction, and even lets the individual vets and keepers express their frustration with the catch-22 of it all: a life in captivity has left the animals without the skills to survive in the wild, so a life in captivity is the only option. We owe a duty of care to them now.

What we owe to animals is the issue at the core of Kifaru (April 27, 8:30 pm, Isabel Bader April 28, 10 am, TIFF 1 May 3, 4 pm, Fox) as well. Director David Hambridge embeds us with Kenyan rangers at the Ol Pejeta Conservancy tending to Sudan, the world’s last male Northern Black Rhino, as he nears the end of his life.

It’s a testament to the dedication and heart of a handful of people determined to protect an animal to its very last breath – though it’s not an easy film to watch.

Oh, and I mentioned fish. Richard Ladkani’s Sea Of Shadows (April 28, 9 pm, Isabel Bader April 29, noon, Hart House May 4, 5:30 pm, Fox) investigates the bizarre connection between Mexican drug cartels, Chinese black marketeers and the smallest member of the cetacean family, the vaquita, which is being pushed to extinction as a consequence of the illegal trade in totoaba fish, whose swim bladders are believed to hold healing properties.

And even though it’s screening outside this series, I’d be remiss if I didn’t mention Heddy Honigmann’s Buddy (April 26, 3:15 pm, TIFF 1 April 27, 3 pm, Isabel Bader April 30, 10:30 am, TIFF 3), which looks at six very different people in the Netherlands and their beloved, essential service dogs. It’s a meditation on the profound connection we make with dogs, the work dogs perform for people and the limited time we have with them. (Remember how we were talking about questions of stewardship and responsibility?)

It’d also be negligent of me not to point out that most of these documentaries have bittersweet endings, at best things aren’t going well for animals in the Anthropocene age, and a number of these films have scenes that will break your heart.

That’s why those scenes are there, of course if you choke up, or lose it completely, it’s a reminder that you’re human. Animals remind us of that, too.