Nîpawistamâsowin: We Will Stand Up leads the lineup, which also includes docs about the Quebec City mosque shooting, Aung San Suu Kyi and Wu-Tang Clan 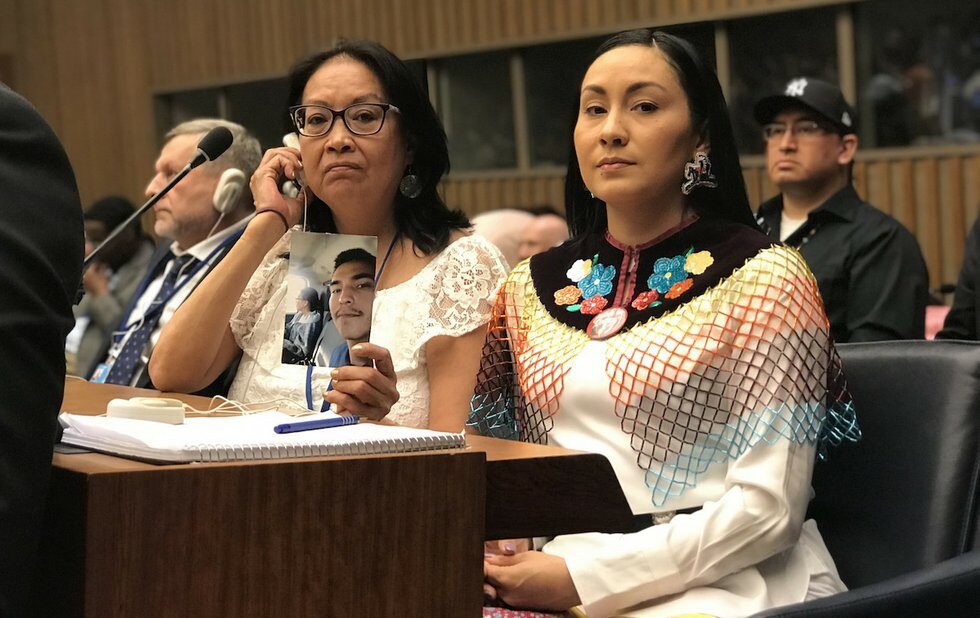 Tasha Hubbard’s nîpawistamâsowin: We Will Stand Up, about the outrage among Indigenous communities after all-white jury acquitted the killer of Cree man Colten Boushie, will open this year’s Hot Docs Canadian International Film Festival.

In the documentary, the Saskatoon-based director of Birth Of A Family blends personal reflection, footage of Boushie’s family traveling to the United Nations and a history of colonialism on the Prairies in order to grapple with the 22-year-old’s 2016 shooting death and the subsequent trial and acquittal of Gerald Stanley last year. The film was announced as the opening night gala at a press conference at the Hot Docs Ted Rogers Cinema on Tuesday, March 19.

The doc is among 234 features and shorts and another 18 “interdisciplinary projects” – including VR installations, food-and-film events, panel discussions and two free IMAX screenings at Ontario Place Cinesphere – from 56 countries. An estimated 54 per cent of the directors in the festival are women.

Ai Weiwei – who was unable to attend the premiere of Hot Docs 2012 opening-night feature Ai Weiwei: Never Sorry because he was effectively under house arrest in his native China – will attend the 2019 edition with the previously announced North American premiere of The Rest. A companion piece to 2017’s refugee study Human Flow, the film will screen in the festival’s Big Ideas series, which supplements its featured films with in-depth panels with the filmmakers and special guests. (Ai will also appear in a separate onstage conversation event at the Isabel Bader Theatre, one of the festival’s regular venues.)

Also screening in Big Ideas this year: Laurence Mathieu-Leger’s Willie, about the man who broke the NHL’s colour barrier (with that man, Willie O’Ree, on hand for the post-screening panel) Adam Bolt’s Human Nature, about the revolutionary possibilities offered by DNA resequencing (with biochemist Jennifer Doudna) Phyllis Ellis’s Toxic Beauty, about the public health dangers posed by beauty products (and featuring whistleblower Deane Berg and doctors Daniel Cramer and Ami Zota), and Joan Tosoni and Martha Kehoe’s Gordon Lightfoot: If You Could Read My Mind, accompanied by their illustrious singer-songwriter subject.

Ingrid Veninger’s The World Or Nothing follows twin Cuban brothers as they migrate to Spain chasing online stardom Chris Flanagan’s Shella Record: A Reggae Mystery finds the filmmaker traveling to Jamaica in search of the woman who recorded an obscure track that’s become his obsession. And Ubaydah Abu-Usayd and Abderrahmane Hedjoudje’s Your Last Walk In The Mosque looks at the aftermath of the 2017 Quebec City mosque shooting – a subject that will no doubt feel more fraught in the wake of last week’s massacre in Christchurch, New Zealand.

Films screening in the International Spectrum series include Edward Watts and Waad al-Kateab’s For Sama, a video diary from a mother in Aleppo to her infant daughter which just won the audience award at SXSW Pailin Wedel’s Hope Frozen, about a Bangkok family that makes the controversial decision to cryopreserve the body of their late two-year-old daughter, and Karen Stokkendal Poulsen’s On The Inside Of A Military Dictatorship, which looks at Aung San Suu Kyi’s doomed attempt to bring democracy to Myanmar after her election victory in 2015.

And the World Showcase program is heavy on personal stories such as Mo Scarpelli’s Anbessa, about an Ethiopian mother and child living as scavengers on the edge of Addis Ababa Julia Horn’s Dear Brother, about a man dedicated to communicating with his catatonic brother through music, videos and touch Alex Parkinson and Richard da Costa’s Last Breath, about the effort to rescue a commercial diver trapped hundreds of feet underwater with just five minutes of oxygen and Luke Lorentzen’s Sundance favourite Midnight Family, about a Mexico City clan trying to break into that city’s for-profit ambulance industry.

But there are also bigger-picture projects: Catherine Meyburgh and Richard Pakleppa’s Dying For Gold exposes the human cost of South Africa’s gold-mining industry Isa Willinger’s Hi, A.I. considers the inexorable integration of artificial intelligence into our daily lives, and Jennifer Deschamps’s Inside Lehman Brothers looks back on the 2008 subprime mortgage crisis through the eyes of mortgage brokers and accountants – most of them women – who tried to sound the alarm, and were ignored.

New programs announced at this year’s festival include Making Believe, which gathers documentaries about determining what’s real and what isn’t in the ever-shifting landscape of modern news media. Hans Pool’s Bellingcat – Truth In A Post-Truth World follows the efforts of a global collective of citizen journalists that specialize in “open source investigation,” separating facts from fake news. Larry Weinstein’s Propaganda: The Art Of Selling Lies talks to artists like Kent Monkman, Shepard Fairey and Ai Weiwei, who work to push back against official narratives from politicians and governments.

Animal Magnetism will focus on “the complicated relationship between humans and animals” with films like Ljubomir Stefanov and Tamara Kotevska’s Sundance smash Honeyland, about the efforts of Macedonian beekeeper Hatidze Muratova to live in harmony with her charges, and David Hambridge’s Kifaru, which follows the Kenyan rangers who look after the last male northern white rhino in his final years.

Returning programs include Artscapes, which will screen (among others) Stacy Tenenbaum’s Pipe Dreams, which looks at the Canadian International Organ Competition in Montreal Jamie Kastner’s There Are No Fakes, an investigation of a wide-ranging art forgery ring, and Halina Dyrschka’s Beyond The Visible: Hilma Auf Klint, which explores the recent push to restore the Swedish abstract artist to the pantheon, and the decades of resistance that have kept her out. The first two episodes of Sacha Jenkins’s Showtime documentary series Wu-Tang Clan: Of Mics And Men will also have their Canadian premiere in the program.

The Nightvision program is back as well, offering a curated selection of “future cult classics” including Memory – The Origins Of Alien, a look back at the artists who shaped Ridley Scott’s 1979 masterwork from 78/52 director Alexandre O. Philippe Trixie Mattel: Moving Parts, Nick Zieg-Owens’s profile of the RuPaul’s Drag Race All Stars champion as she tours with her one-woman show, and Who Let The Dogs Out, in which director Brent Hodge unpacks the provenance of Baha Men’s 2000 hit single, which turns out to be far more convoluted than anyone could have imagined.

The interdisciplinary Doc X series returns with another host of experimental programming, including a live performance of Supreme Law, billed as an interactive and satirical look at the drafting of the Canadian Constitution, hosted by comedian Jus Reign. The program also features a host of VR experiences, including selections from Nicholas de Pencier, Jennifer Baichwal and Edward Burtynsky’s Anthropocene project, a cancer-awareness tutorial The Evolution Of Testicles (hosted by the actor Chris O’Dowd) and Traveling While Black, a virtual documentary about the history of racially restricted movement in America from Roger Ross Williams, Ayesha Nadarajah, Félix Lajeunesse and Paul Raphaël. (Think Green Book, but without the cheerful white saviour – or the happy ending.)

And last year’s Silence Breakers program of whistleblower documentaries has evolved into Persister, dedicated to stories of “women speaking up and being heard”. Features include Baljit Sangra’s Because We Are Girls, a look at Indo-Canadian siblings overcoming their misogynistic upbringing to face their abuser in a British Columbia court Pachi Bustos’s Haydee And The Flying Fish, about a woman tortured under the Pinochet regime waiting to see if a court judgment will give her some closure four decades later, and Yu Gu’s A Woman’s Work: The NFL’s Cheerleader Problem, a look at the class-action lawsuits filed by former cheerleaders against the National Football League for wage theft, sexism and labour violations.

In addition to the previously announced retrospectives for outstanding achievement award recipient Julia Reichert and the Focus On honouree Julia Ivanova, this year’s festival will also include a Redux tribute to the National Film Board’s female-forward Studio D, including the Oscar-winning shorts Flamenco At 5:15, I’ll Find A Way and If You Love This Planet, and a new quartet of shorts produced to continue the shuttered division’s Five Feminist Minutes series. New work from Anne Marie Fleming, Deanne Foley, Joyce Wong, Alexandra Lazarowich will screen in a single program along with four shorts from the original 1990 wave – including Fleming’s own contribution, New Shoes.