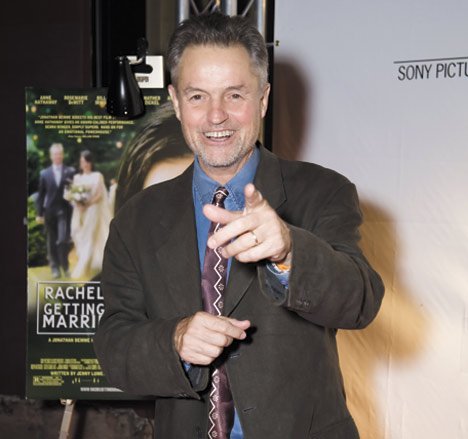 Jonathan Demme hits a September 12 screening of The Agronomist.

The news broke earlier today that American filmmaker Jonathan Demme had died in New York at the age of 73. The cause was “esophageal cancer and complications from heart disease,” according to Indiewire.

This one’s a heartbreaker. In addition to leaving behind a varied and delightful body of work – including several definitive concert films, and of course the Oscar-winning thriller The Silence Of The Lambs – Demme was beloved by everyone who ever worked with him… and, as far as I can tell, by anyone who even met him, myself included.

Starting out in the exploitation factory of Roger Corman’s American International Pictures – where he wrote the Scott Glenn biker movie Angels Hard As They Come and directed the women-in-prison picture Caged Heat, among others – Demme quickly distinguished himself as someone capable of making “real” movies within the sphere of quickie cinema.

His ensemble comedy Handle With Care – released as Citizens Band by Paramount to cash in on the trucker trend of the 70s – gave a stellar cast of indie character actors some major-studio exposure, including Paul Le Mat, Candy Clark and Ed Begley Jr.

Demme would cast Le Mat in his dramedy Melvin And Howard as Melvin Dummar, a Utah nobody who laid claim to the fortune of Howard Hughes after the industrialist’s death. It was an oddball project from its inception, with Jason Robards playing Hughes as a sort of leprechaun and Mary Steenburgen doing her own very specific thing as Dummar’s long-suffering wife Lynda, but Demme made everyone’s eccentricities fit together.

Nominated for three Oscars, it won two, for Steenburgen’s supporting performance and Bo Goldman’s screenplay. (Robards lost to Ordinary People’s Timothy Hutton.) Suddenly Demme went from genre guy to an actor’s director – and the person you went to if you wanted a movie with personality.

Demme was a master of capturing personality, at finding the point where a performer and character become indistinguishable. You can’t imagine anyone but Goldie Hawn in Swing Shift, or Melanie Griffith in Something Wild, or Jodie Foster and Anthony Hopkins in The Silence Of The Lambs.

Michelle Pfeiffer in Married To The Mob, Tom Hanks in Philadelphia, Anne Hathaway in Rachel Getting Married, Meryl Streep in Ricki And The Flash – these performances were the result of Demme’s instincts as much as the actors’. He knew how to let people be themselves in front of the camera, which also played into his side gig as a documentarian.

Demme made exceptional documentaries, and whether they were capturing political reality in The Agronomist, Jimmy Carter: Man From Plains and I’m Carolyn Parker or performance, like Spalding Gray’s Swimming To Cambodia, Robyn Hitchcock’s Storefront Hitchcock or the essential Talking Heads concert film Stop Making Sense, his visual and editorial approach was unerring.

(He used music brilliantly in his feature work, too I could write hundreds of words about the exquisite pop soundtracks of Something Wild and Married To The Mob, or the flow of live music that serves as the backdrop to the second half of Rachel Getting Married.)

Demme made three pictures with Neil Young between 2007 and 2011 – each with a different aesthetic, and each perfectly suited to its chosen material. Heart Of Gold was stately and reflective, befitting the elegiac tone of Young’s album Prairie Wind Trunk Show was gloriously chaotic, its handheld approach matching the random feel of that stage show Journeys was downright casual, with Demme riding along with the artist as he drove from his childhood home in central Ontario to Toronto for a performance at Massey Hall.

Rather than repeat himself, Demme found new ways in every time. We talked about that a little when he brought the movie to TIFF in 2009. Don’t forget to listen to the audio clips.

Demme’s initial cancer diagnosis came in 2010, between Trunk Show and Journeys, just as he was enjoying a career resurgence with Rachel Getting Married after a stretch of studio disappointments. He responded by speeding up his output: more documentaries, more TV work, an adaptation of Ibsen’s The Master Builder with Wallace Shawn and André Gregory. Who had time to be sick?

What now stands as his last feature, the concert movie Justin Timberlake + The Tennessee Kids, feels like the work of a man half his age. Demme translated the energy and complexity of Timberlake’s 20/20 Experience tour into a big-screen celebration of visual bombast and technical virtuosity. It’s a shame most people will watch it on Netflix it dazzled TIFF audiences on the big screen.

But of course it did. Dazzling people is what Justin Timberlake does, and showing people at their best is what Jonathan Demme did.

It’ll be a long time before anyone else fills his shoes.