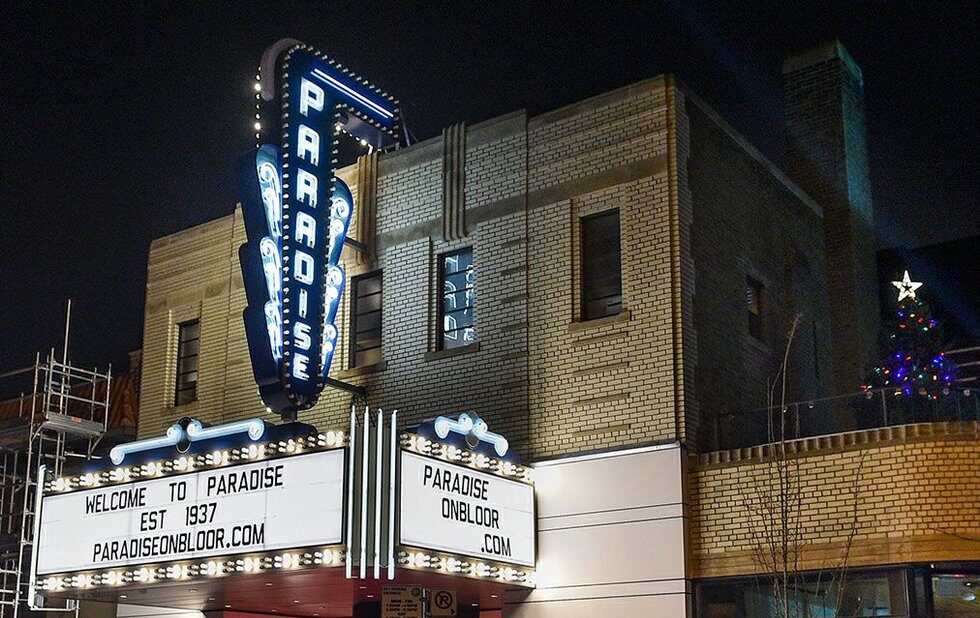 The petition alleges that Cineplex has “an informal and unlawful arrangement with film distributors that will not allow films to be booked with any competing theatres until Cineplex is done screening the film.”

It wasn’t long before cinema owners in Toronto weighed in, with the Paradise on Bloor West using the petition as a lever to explain why the recently reopened house isn’t offering recent releases like Parasite, this year’s Oscar winner for Best Picture.

“Our experience has been that we are not granted access to show movies if they’re playing at Cineplex Cinemas Varsity and VIP, which is 3.5 km and six subway stops away,” director of programming Jessica Smith and director of communications Sonya William wrote in a February 18 blog post. “Varsity is a multiplex with nine [sic] screens. As an independent single-screen cinema with 208 seats, we don’t believe we pose a competitive threat.”

The prohibition on geographical competition goes back decades, to an agreement between the major English Canadian chains – in Toronto, Cineplex Odeon and Famous Players – that a given film wouldn’t play in more than one location within a certain space.

In the 80s and 90s, when Cineplex’s Varsity and Showcase cinemas operated just a few dozen yards away from Famous Players’s Uptown, Backstage and Plaza theatres in the Bay-Bloor-Yonge corridor – and Famous’s Hollywood was two doors north of Cineplex’s Hyland at Yonge and St. Clair – the agreement made sense, since the competition was proportionate between the big chains. But now that Cineplex is the last mega-chain standing, it’s becoming clear that the zoning policy is being used to starve the smaller houses of new programming.

“My understanding is that the zoning is a vestige of that deal [between Famous Players and Cineplex Odeon],” says Smith, “when 35mm prints were moving around from circuit to circuit. But now there’s really no reason why that should apply – especially when you’re talking about our example. I don’t really think we’re competing for the same audience… we’re in a completely different neighbourhood.”

Asked for comment, Cineplex spokesperson Sarah Van Lange said distributors are the ones who decide where to screen films.

“Cineplex does not own the rights to the movies that appear on our screens – we license them from Canadian distributors to play in our theatres,” she said. “It is up to film distributors to decide where they play their films.”

“They do own the film,” says Smith. “But again, what we all know is happening is that there are restrictions placed on the distributors by Cineplex whereby they have allegedly threatened the distributors to pull the film from Cineplex or from the circuit if they book elsewhere. You know, it might be a particular independent [cinema] in a particular zone or city, but that seems to be happening.”

“I remember one distributor telling me that when he would tell Cineplex he was going to play at Lightbox they would say to him, ‘Okay. I hope Jesse can book you in Montreal, Vancouver and Calgary as well,’ ” he wrote. “The implied threat that they wouldn’t take the movie in those places if it played with us. They used [the] same line back then, ‘the distributor decides where their movies play.’ Sure, but if they want to stay in business they have to play Cineplex.

“The fact that we were a not for profit never mattered. When we did break a movie big, they would be retaliatory.”

“It’s Penguin behaviour,” says Eric Veillette, programming director at the Revue Cinema in Roncesvalles. “Like, if Lex Luthor ran a chain of movie theatres, you know?”

Veillette appeared on CBC’s Metro Morning earlier this week to discuss the petition and the impact of Cineplex’s zoning policy on smaller rep cinemas, citing the Queensway as an example of a theatre certain distributors consider a potential competitor to the Revue. The Queensway is in Etobicoke, some 12 kilometres from 400 Roncesvalles. Members of the recently formed Network of Canadian Independent Exhibitors (NICE) have been swapping stories about various titles they’ve been unable to screen.

“We get requests,” says the Paradise’s Smith. “ ‘Why aren’t you showing Parasite? Will you be showing Little Women? I would love to wait to see it at Paradise if I know it’ll be coming there.’ And sadly, we can’t say if and when that will happen. There are some films we just don’t have access to until well past the point when the film is available on Blu-ray. If we can’t access it until, say, six months down the line, is there any interest?

“Certain films are part of the cultural zeitgeist, and people move on, so it’s important that we’re able to access these films when they’re generating a buzz, and of interest to broader audiences.”

As Cineplex prepares to be acquired by UK-based Cineworld Group PLC later this year – a deal that came one step closer to closing when the Ontario Superior Court approved the sale earlier this week – there’s hope that the petition will shine some light on the chain’s practices, and perhaps attract the attention of federal regulators who might see Cineplex’s virtual megaplex monopoly as something to be addressed.

“It’s one thing if everyone’s abiding by the same rules, regardless of whether it’s fair to begin with,” says Smith. “But I’ve had a film confirmed [to screen] and then had it taken away because the film was screening at the Scotiabank, which allegedly is not in the same zone. And it wasn’t playing at the Varsity at the time, either.”