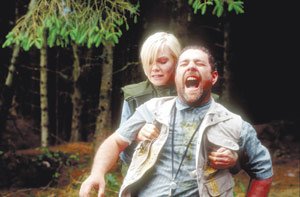 As with anyone in their late 30s or early 40s, Noah Baumbach’s psycho-sexual development owes a lot to the movie Fast Times At Ridgemont High. So how weird is it now to be married to the film’s star, Jennifer Jason Leigh, and be good friends with Phoebe Cates, whose son Owen Kline appeared in Baumbach’s breakthrough 2005 hit, The Squid And The Whale?

“My life is a Fast Times flashback,” laughs Baumbach, in town for the Film Festival. When I ask what it’s like to end up with that film’s so-called “good girl,” he chuckles knowingly.

“I don’t know if she was the good girl. Isn’t that what we learned? That the good girl isn’t all that she seems?”

You could say Baumbach’s latest film, Margot At The Wedding, is all about people who aren’t what they seem. Estranged sisters Pauline (Leigh) and Margot (Nicole Kidman) reunite for Pauline’s wedding to slacker Malcolm (Jack Black). Family ghosts get rattled, secrets get aired, and Black’s there to add some nuttiness to the nuptials.

Baumbach began with an image of a mother and son on a train, which is in fact how the film opens. Kidman’s Margot and her androgynous pubescent son, Claude (Zane Pais), are chatting on a train, casually discussing their lives.

“When a parent and child take a voyage away from the other members of the family, they’re like a shuttle that goes off into another world together,” says Baumbach, in his halting, self-conscious manner. “I was interested in how that relationship transforms. It can get stronger because you’re each other’s ally, but you’re also faced with new experiences. Together, they almost seem like a couple, like confidants, and that got me writing the script.”

The film’s psychological terrain feels like Eric Rohmer turf transplanted across the Atlantic, and the title echoes the simple construction of Rohmer’s Pauline At The Beach. (Note the character’s name.) At the same time, its harsh look at sibling rivalry, not to mention its poster artwork, suggests another influence: Woody Allen’s Interiors. Baumbach nods.

“I didn’t look at Rohmer movies or Interiors when I made this,” he says. “I guess influence seeps in over time. I love Rohmer movies, and his themes are something I connect to in a very personal way. They’re often about people’s ideas of themselves versus the way the world or someone reacts to them.”

One curious thing about the film is its natural lighting design. Those shadows are psychological as well as literal.

“The cinematographer and I wanted to approximate how your eye sees things,” says Baumbach. “When you shoot people inside and it’s light outside, your face goes dark. I like that. Why shouldn’t a movie give you that?”

In the film, Margot’s a writer who’s annoyed her family many times by writing autobiographical material for the world to read. Baumbach himself toys with fiction and autobiography. In The Squid And The Whale, the self-absorbed semi-famous intellectual parent mirrors Baumbach’s own semi-famous intellectual parents (novelist Jonathan Baumbach and critic Georgia Brown).

“Squid was perceived as more autobiographical than it was,” he says. “I write very personally. But it’s all reinvented. Anyone who’s really in my life sees it that way. They are fiction films. They just don’t always seem that way.”

On the theme of class in the film:

On casting Jack Black in the film:

Margot At The Wedding doesn’t reach the artistic heights of Baumbach‘s breakout hit, The Squid And The Whale, but the psychological depths are just as hilarious, nasty and uncomfortable to witness.

Margot (Nicole Kidman) and Pauline (Jennifer Jason Leigh) are estranged siblings who reconnect for a wedding but end up getting mired in past grievances, even though their new lives (Margot’s brought along her son, Pauline shows off her fiancé, played by Jack Black) indicate they’ve moved on and become real adults.

The film has a relaxed, naturalistic look, and the performances feel authentic, although Black’s comic routines sometimes seem like they’re from a different movie. As he did in Squid, Baumbach shows great affection for children, who learn early on that words can wound and families can protect yet destroy. GS