Adam Green gave up skiing at 16 after dreaming up Frozen, a chiller that’s being called Jaws on the slopes 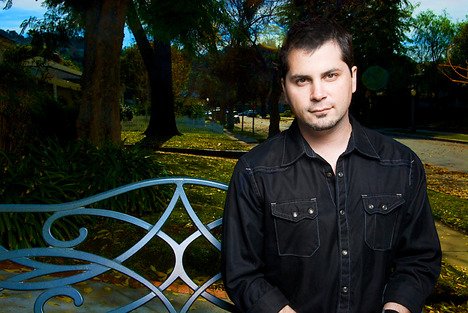 This is doubly appropriate. It’s the middle of the Sundance Film Festival, where people leave a screening and head to the chairlifts, and his movie, Frozen, is about three young people who find themselves stuck on one of those lifts when a ski resort closes for the week.

The scenes on the chair feel uncomfortably real, Green explains, because they are.

“The whole thing was shot on an actual chairlift, 50 feet in the air, on a ski mountain in Utah,” says the director. “The entire shoot was 24 days, 19 of which were overnight shoots. If you were to do this movie safely, on a soundstage or green screen, it wouldn’t work. And very few people are willing to go through what the cast and crew went through for this.”

About an hour of Frozen is set on that chairlift, where co-stars Shawn Ashmore, Kevin Zegers and Emma Bell struggle to think their way out of their unimaginable situation. Well, not unimaginable, obviously Green dreamed it up when he was a teenager.

“I gave up skiing when I was about 16 because I thought of this,” he laughs. “Where I grew up, in the Boston area, we didn’t have real ski mountains. We had mountains that were only open on the weekends, and on Sunday night when the chair would stop, you’d always wonder, ‘What if somebody doesn’t do their job right? What if they forget we’re here?’ That’s something every skier can relate to, that fear when the chair stops for no reason. I think that’s why the movie’s affecting people.”

“Affecting people” is putting it mildly. The film traumatized Sundance audiences on a nightly basis there were reports of patrons vomiting or fainting during the more intense moments.

“We haven’t been publicizing the fainting, but the theatres have,” Green admits. “So before each screening here they now have me make an announcement: ‘If at any point you don’t feel well, please get up and leave.’ A lot of times when they know the cast and crew are in the theatre, people don’t want to walk out because they feel they’re insulting you. But in this case it’s a compliment to see people running for the door at certain points. It’s rewarding, in a kinda sick and twisted way. It’s like, ‘Yeah! Got you!'”

He definitely has. Frozen has a ruthless simplicity that gets under people’s skin – and stays there after the credits roll.

“Maybe this will become part of their permanent psyche, like Jaws did,” Green says. “The next time you’re on a chairlift and it stops, you’ll nudge your friends and ask, ‘Hey, remember that movie?’ And they’ll say, ‘Dude, shut up. Don’t talk like that.'”

Adam Green on how Frozen fits into his filmography:

Green on keeping his movie believable: