Adriana Maggs’s uncle played in the NHL, and now she scores in breakout flick 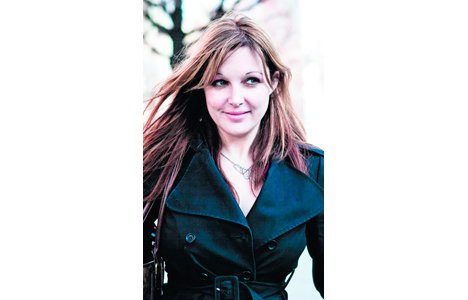 Adriana Maggs, writer/director of Grown Up Movie Star, doesn’t look like someone who’s written a film about a gay hockey player in Newfoundland trying to raise two kids alone.[rssbreak]

For one thing, she seems too young to have the depth of experience you need to bring together all her themes: male friendship, disability and sexual desire, hockey dynamics and closeted gays.

Turns out she’s not in her early 20s, but 30. And I’ve obviously gone way overboard on stereotyping women from the Rock. I’m expecting a mullet-headed hockey mom type and get someone who’s almost glamorous.

Maggs won’t be playing women’s hockey any time soon, but she does have an authentic connection to her hockey themes. Her uncle, Darryl Maggs, played in the NHL, and frequently complained to her about how limited conversation was in the locker room.

“The things Darryl wanted to talk about – George Bush, Ronald Reagan – the team didn’t want to talk about,” she says with more than a little upspeak as she settles into a chair in a Sutton Place hotel room. “I hear the same thing from a friend who’s married to an NHL player. I was interested in what it would be like to have a gay mentality within that frame.”

But, Maggs says, Ruby’s the character (played by Tatiana Maslany) who inspires her the most. She’s just coming of age, living with her dad, Ray (Shawn Doyle), a gay ex-NHLer, and her younger sister after their mom walks away from dreary Cornerbrook.

In Ruby’s case, she heads to her dad’s best friend, Stuart (Jonny Harris), wheelchair-bound because of a shooting accident with Ray. Stuart’s got a gift for photography, and Ruby wants some portfolio shots so she can become a movie star – her ticket off the Rock.

Eventually, the connection between Ruby and Stuart gets sexually complicated, leading to a stunning scene where he tries to convince the budding teen to fork it over. Maggs shows a deft touch in a loaded sequence that could have gone wrong in many ways.

“He’s a lonely paraplegic, who needs help to have sex, thinks he’ll never find a relationship and that he’s in love. He deludes himself the way we all delude ourselves into thinking something might work,” explains Maggs,.

“And you have a girl who’s lonely and not getting the attention she needs. She’s realizing the power she has over this man and other men in general, doesn’t know what promises she’s making and doesn’t have the self-esteem to say no, because she realizes in that moment that she’s promised this the whole time.”

Maggs pulls it off because she’s established her characters’ motivations with unerring clarity, and, as she puts it, “I didn’t want anyone to be the villain.

“She’ll probably go back to see him. Fuck, when you think about the relations women get into with men, we always go back when they’re the sweetest people.”

She describes Ruby as a bright, overdressed spot in a bleak world.

“That’s what we love – the beauty and the ugly. I had my first date at the city dump in Cornerbrook. The mountains are over here and the ocean’s over there. You think it’s the most beautiful view – and you’re in the dump.”

“So many of us are going to Utah,” she enthuses, “they’ll have to close the border.”

On financing the film: