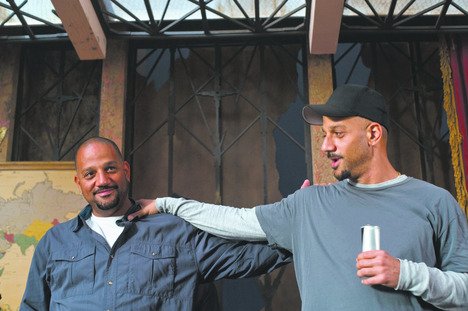 Allen (left) and Albert Hughes dont want to direct the next Superman pic.

It’s been nine years since allen and Albert Hughes have brought a feature to the big screen. After 2001’s Johnny-Depp-meets-Jack-the-Ripper thriller From Hell, they’ve spent most of their time working in TV and trying to get another movie off the ground.[rssbreak]

But it’s a new decade, and the twin filmmakers – who broke out with the one-two punch of Menace II Society and Dead Presidents – are kicking it off with The Book Of Eli, a post-apocalyptic actioner in which Denzel Washington plays the ass-kicking guardian of the last copy of a certain highly valued text – which he must defend at all costs from those who would use its power for evil.

Like the brothers’ other films, it’s a highly stylish work that isn’t afraid to go big. And as they explain over the phone from Los Angeles, it was a hell of a thing to get made.

“We thought we were gonna make it immediately,” says Allen. “As it turned out, [we went through] two years of development hell. Which was good for the script, though.”

There was never any question who’d be starring in it.

“The script was done,” Albert says, “and there’s a handful of guys you look at. Once Denzel’s name came up, Allen and the studio were like, ‘That’s the guy who can sell this.’ There was no ‘Let’s go with this other guy.’ It was him from the start.”

Once Washington was on board, the brothers started assembling the rest of their cast. You may notice a lot of English people wandering around Eli’s blasted American landscape – including Ray Stevenson, Frances de la Tour, Michael Gambon and Gary Oldman.

“Michael we’ve always been a fan of, in stuff like The Insider. And just from working on From Hell, we realized that the English show up and they work, and they like to have fun. There’s no bullshit, there’s no, like, ‘Oh, here’s a script I’m trying to sell you,’ or talk about Hollywood shit. They show up and they work and they curse like sailors and they drink and eat their curry – they’re just great to be around.”

As diplomatically as possible, I ask if they’re cool with having a nine-year gap between features – and whether they’re hoping to get the next one off the ground more quickly.

“You’ve gotta try to work within the system, and it’s getting more and more difficult to do that,” says Albert. “It’s a minor miracle that this actually got done – it had to go through independent financing. This would have just languished at a studio. Hopefully, it’s successful, so we can do another one, because I think the climate right now is ‘Tentpole. We want tentpole.’ Me and Allen aren’t tentpole people. We’ll make a little camping tent, but we don’t want a circus tent.”

Albert Hughes on designing the apocalypse:

Albert Hughes on falling in love with digital post-production tools:

Allen Hughes on walking a careful line with the subject material: