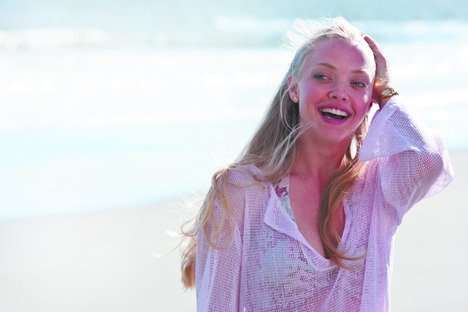 Amanda Seyfried’s having trouble getting into interview mode. The Mamma Mia! and Jennifer’s Body star is listless and, strangely, barefoot.

“I haven’t slept, and I’m not a shoe person,” she says grumpily, dropping a pair of high heels on the floor beside her chair in a Hyatt hotel room.[rssbreak]

But, she tells me, gathering her energy, she had no problem getting into her Dear John role as Savannah, the girl left behind by the loyal soldier who heads to the front lines after 9/11.

For one thing, she says, she could relate to the army wives’ experience with long-distance relationships.

“I have my own long-distance relationship,” she says, referring to her connection to Mamma Mia! co-star Dominic Cooper. “Long-distance, long-term.”

And besides, she explains, she is almost playing a version of herself.

“I’m really connected to the part of me that feels love,” she explains. “I’ve experienced different kinds of love even at the age of 24.

“I love how pure the love is in the beginning. It’s new, and it feels like the be-all and end-all, and then life happens – that’s realistic.”

In Dear John, as she did in Mamma Mia!, Seyfried flaunts her musical chops, both in the film and on the soundtrack. In fact, she thought she was going to have a career in opera.

For the moment, however, she’ll have to settle for performing with some of the best screen actors in the world. In Dear John, she works with Richard Jenkins, Oscar-nominated last year for The Visitor.

“He’s cool, funny and easy to hang out with. Nothing fazes him, and he doesn’t seem to be scared by anything,” she says. “Things still scare me when I play a certain role. But you can’t afford to feel intimidated, because that actually takes away from the skill of it all.”

Speaking of intimidation, how did she manage playing opposite Meryl Streep in Mamma Mia!?

“Not well,” she admits frankly. “It was my first leading role, and it was opposite Meryl Streep. I felt inadequate, and that’s strike one for me. You’re supposed to make yourself believe you’re good enough, which I didn’t, because she’s Meryl Streep – she’s the best, she’s number one. She smelled that in me.

“I didn’t think to ask her if she got what she deserved from her co-star. I was a child in those days. It was three years ago.”

Seyfried’s not exactly wizened now, but she’s no longer a deer in the headlights when playing against major talent.