Holding her own opposite Clooney, Twilight’s Anna Kendrick is on her way Up 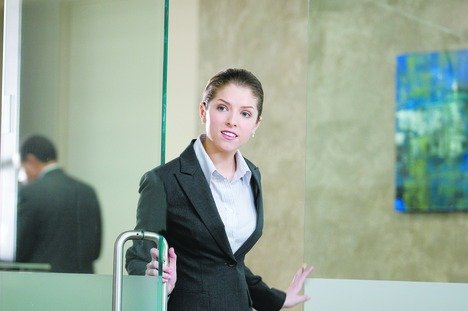 UP IN THE AIR directed by Jason Reitman, screenplay by Reitman and Sheldon Turner, based on the novel by Walter Kirn, with George Clooney, Vera Farmiga, Anna Kendrick and Jason Bateman. A Paramount Pictures release. 108 minutes. Opens Friday (December 4). For venues, times, and trailers, see Movies.

“I’m in Twilight,” explains the young actor to the table of journalists at the Toronto Film Festival, “and I’m not a werewolf or a vampire. I’m in Scott Pilgrim and I don’t get to fight or be in a band. And I don’t get to make out with George Clooney. It’s tough. It’s a tough life.”

Because Kendrick has, in fact, caught several substantial breaks in the last couple of years.

First, she landed a role in the blockbusting Twilight series (and nabbed one of the best scenes in this year’s sequel, New Moon). Then Edgar Wright cast her in his Scott Pilgrim movie, which shot in Toronto this year. Next, Jason Reitman cast her as George Clooney’s shadow in his new film, Up In The Air – which is what’s brought her to TIFF.

Up In The Air has been collecting a lot of Oscar buzz, and while most of it is aimed at Clooney and Reitman, Kendrick’s building her own momentum.

As Natalie Keener, a hyper-confident management expert who doesn’t understand the “human” side of “human resources,” Kendrick more than holds her own against her household-name co-star. All it took was an industrial-strength scrunchie.

“I can’t tell you how much I hate that hairstyle,” Kendrick says, laughing. “I was doing some [looping] and Jason Reitman suggested that to get [back] into character I pull my hair back really tight. That’s just the neatest hairstyle possible, and I think that’s what Natalie likes about it.”

It was also an easy way to suggest the character’s mounting stress.

“Throughout the film, little pieces of hair start to fall down,” Kendrick says. “I remember shooting one scene and feeling like I was so dishevelled I might as well have looked homeless. Just because I was so used to the character being so prim and proper, and so in her box of never making a mistake, just one hair out of place made me feel completely exposed and completely vulnerable.”

That’s hard to imagine. Kendrick’s strength as an actor is her unfailing self-confidence – a quality evident in her first big role as super-debater Ginny Ryerson in Rocket Science.

“I’m drawn to female characters who are really strong and really in control and smart,” she says, “because so often they’re not written that way. I knew as I was reading the script that she was not going to turn out to be a romantic character in any capacity, so I kept waiting for her to disappear from the script – because, you know, what purpose could she possibly serve?

“As it went along and she just kept getting better and better, I got more and more excited, and then the fact that she goes through this whole transformation was just unbelievable. When people ask what drew me to the role, it seems obvious, but Natalie’s such an incredible, smart and strong female character, and it’s such a blessing that that happens to have nothing to do with a man being opposite her.”

With Scott Pilgrim and the third Twilight movie, Eclipse, in the can and Up In The Air being positioned for a platform release over the Christmas season, Kendrick is looking forward to doing a lot of nothing for the next few months – and, with any luck, enjoying the perks of a slightly higher profile.

“Every time I go through customs, they give me such a hard time when I say I’m an actor,” she says. “They’re so suspicious. They always ask, ‘Oh? What have you been in?’ And I usually just say Twilight, because most people have heard of that. The last time I was here, I said, ‘Oh, this film series called Twilight,’ and he said, ‘Oh, I don’t get the sci-fi channel.’

“It puts things in perspective.”

Anna Kendrick on landing the part of Natalie Keener:

Kendrick on the difference between doing press for the Twilight movies and Up In The Air:

Kendrick on the frenzy over the Twilight phenomenon: