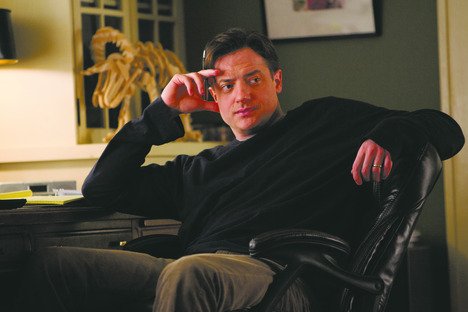 Brendan Fraser drew on his experience as a dad to find his characters motivation.

Look through Brendan Fraser’s filmography and you have to give him credit: the guy takes chances.[rssbreak]

He’s done his share of big studio pictures – the Mummy movies, George Of The Jungle, that unbilled cameo in G.I. Joe: The Rise Of Cobra – but he’s also held his own in such serious-minded films as Gods And Monsters, The Quiet American and Crash.

His latest drama, Extraordinary Measures, may not be an Oscar contender, but it gives the endearing Canadian actor a long-overdue lead as a normal human being. He plays John Crowley, a vice-president at Bristol-Myers who formed his own biotech company to produce an enzyme therapy for sufferers of the rare, invariably fatal genetic disorder called Pompe disease – two of whom were his own young children.

“I was moved by John’s story and astonished that an individual could accomplish this,” Fraser says on the phone from Montreal. “He had the security of a job at Bristol-Myers, he had health insurance, and he went out and did something. He galvanized a team of researchers and scientists. And look, here we are now releasing a movie about the story of his life.”

“You’re talkin’ to an actor here,” Fraser laughs. “So I like having those kinds of challenges. I just had to find a way to put aside ‘Okay, I’m Brendan Fraser’ and draw from my own experiences as a father – which I can identify with, for certain. My three kids are healthy. But I would stop at nothing if anything were to threaten their lives – as would any parent.”

The role also gave Fraser, tipped as the next Indiana Jones-style swashbuckler after The Mummy, the chance to share the screen with the original model. His co-star is Harrison Ford, who plays a cranky genius whose research may hold the key to saving Crowley’s children. (The character is fictional, a composite of the various doctors and researchers Crowley enlisted in his quest.)

“We’re pitted against one another toe to toe intellectually,” Fraser laughs. “This is not two guys throwing punches at each other. And his choice as that composite [character] was to be irascible, a renegade, a guy who wears boots, swigs beer and has had several failed marriages. It makes him more interesting – Harrison as a lovable, gnarled, twisted blue-steel man who has a heart of gold underneath it all.”

With the Mummy movies seemingly behind him after Tomb Of The Dragon Emperor, Fraser is moving into his 40s with no specific game plan beyond keeping his options open.

“At this point I’m just looking to do something that’s honestly interesting,” he says. “For obvious reasons, it should be relevant in the marketplace to please the studios – everybody knows you do one for love, one for money. I’ve just been really, really, really lucky – and underline that twice and put it in bold italics, please – to have had opportunities come my way.”

Fraser on the importance of being lucky, taking chances and staying open:

Fraser on the appeal of producing over directing: