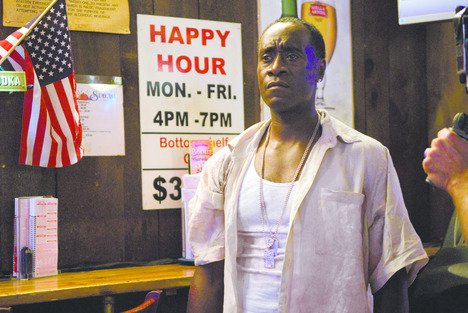 Don Cheadle really is one of this films Finest.

Everybody loves Don Cheadle. And why wouldn’t they? He’s good in pretty much anything he can do comedy, drama and everything in between. Hell, no one even faults him for that terrible Cockney accent in the Ocean’s Eleven movies. We all just assume it’s part of the gag – why else would he be doing it that badly?[rssbreak]

Cheadle once again brings his A-game to Brooklyn’s Finest, playing a tormented undercover cop torn between his loyalties to the job and the criminal who saved his life in prison.

As he explains on the phone from the movie’s New York press junket, it was a role he couldn’t turn down, even though he’d just played a very similar character in the 2008 thriller Traitor.

“It was definitely interesting that they both had such similar things they had to deal with emotionally,” he says. “How do I serve both of these quote-unquote ‘masters’ and come out the other end with some heart and soul? And I think neither of them was successful at that. It was actually helpful to do the other character first, and then kind of bring that experience to bear on this one.”

I ask Cheadle if his performance references Sidney Lumet’s police-corruption classics Serpico and Prince Of The City.

“No,” he says, “but that’s actually a good comparison. The actors approached Brooklyn’s Finest as a throwback to the police procedurals of the 1970s,” Cheadle says. “Lumet’s work is really the quintessential definition of the throwback, isn’t it? A real muscular treatment of the city and these guys, for sure. I love those movies, because they’re the kinds I grew up on. These are the movies that made me want to act.”

Cheadle’s next release is a world removed from the old-school construction of Brooklyn’s Finest. He stars opposite Robert Downey Jr. in Iron Man 2, Jon Favreau’s eagerly awaited sequel to his 2008 blockbuster.

“They couldn’t be more different,” Cheadle says. “I mean, you have no idea what you’re getting into, or what actually is going to happen at the end of that experience. You’re doing motion capture stuff, you’re in half of the suit – or you’re in front of a green screen and you don’t have any of the suit on, they’ve just got dots on you. You just never know what it’s gonna be. There’s so much added post-performance. You really have to throw it over to those people who are gonna actually make the movie at the end of it.”

The role did come with some unexpected baggage, though: Cheadle’s character was played by his Crash co-star Terrence Howard in the first film.

“It was tricky,” he says. “By the time it came to me, the decision had already been made. They were already going away from him. It was gonna be me or the next guy who said yes. But I’ve known Terrence for a while. I saw him a couple of days after it had all gone down, and we had a good talk and we were fine. But still, you know, it’s probably not the greatest situation for him.”

I have to ask the geek question next. Does this mean Don Cheadle will be flying around elsewhere in the Marvel universe? Is there a role for Rhodey in the Avengers movie?

“I stay out of that,” he laughs. “That’s why I pay an agent and lawyers. But yeah, it’s a multi-picture deal that we’re talking about.”

Cheadle on working with effects in like “Iron Man 2”:

Cheadle on the joys of working with Robert Downey, Jr.: