Emilie de Ravin, star of the disappointing Remember Me, talks about the pressures of working alongside a teen heartthrob 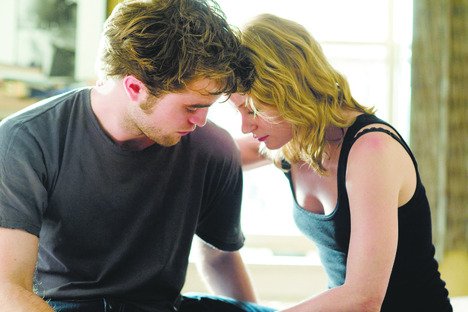 The bright-eyed Australian actor is in Toronto for a round of interviews promoting her new film, Remember Me, a romantic drama that pairs her with Twilight throb Robert Pattinson. From here, she’ll fly into a snowbound New York for the press junket.

After that, it’s back to tropical Hawaii to finish the sixth and final season of Lost, where she plays Claire, who’s returned this year with a mysterious homicidal mania.

“We’ve got three hours to shoot, or maybe three and a half at this point,” de Ravin says. “So about six or seven weeks left. Not much. And I have no idea how it’s gonna end, I really don’t.”

That’s okay, I say. I’m enjoying the mystery and don’t want to know how it wraps up.

“Well, I do!” She laughs. “But at the same time, I’m kinda used to getting surprised each week when I get my scripts, so I like that now.”

Remember Me offered a change from Lost, though its storyline also features characters struggling with father issues and traumatized by the loss of a close relative. (De Ravin’s Ally loses her mother to a subway mugging Pattinson’s Tyler found his suicidal brother’s body.)

But the biggest difference was shooting on location in Manhattan, surrounded by hundreds of screaming Twi-hards, all jockeying for a glimpse of their favourite sparkle vampire.

“It’s fascinating, the amount of screaming – young women and girls and older women, and the occasional male,” she laughs. “Women just came out in general. They can just pop out of nowhere at any given moment. I mean, god, some of them were, like, eight years old! How do you even know what a good-looking guy is? You’re eight!

“But you know, it was interesting to navigate that – to stay focused on what you’re doing, when you’ve got so many people just glued to every movement you make. You’re just trying to figure out a scene and be in that moment. I tried to look at it as a challenge, as opposed to a problem.”

De Ravin found her way through it by developing intricate backstories for her character with Pattinson and Chris Cooper, who plays her father – the better to know where Ally was emotionally in any given scene.

“With Chris,” she says, “we spent time together but also spent time really developing our backstory, basically talking about ‘Okay, what do we talk about on a daily basis? Who cooks? Who does this?’ I think that really helped, and hopefully it comes across.

“There was a similar situation with Rob because, you know, there’s a lot of things that are not happening on-screen. We’re going to get to the point where we basically know everything about each other, but you can’t obviously have the audience there for all of that. It’d take months!”

Remember Me gives de Ravin her largest film role to date – and not just because she’s starring opposite Pattinson. The bulk of her big-screen appearances have been smaller supporting roles. She’s dead before Brick even begins, and her screen time in last year’s Public Enemies amounts to a handful of shots in an early robbery sequence.

“You can develop a three-scene character,” de Ravin says, “and it can be great, but the audience doesn’t know as much about you. So they’re not as comfortable with that character, or they don’t feel like they know that character as much. You really get to know the people in this film.”

de Ravin on the legacy of Lost:

de Ravin on maintaining her performance in Lost’s fractured narrative: