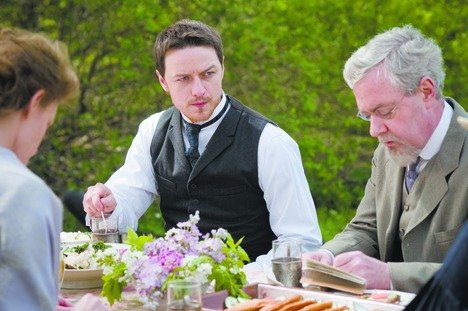 James McAvoy has played a beloved childhood icon (The Chronicles Of Narnia), lusted after Keira Knightley (Atonement) and even transformed himself into a convincing action hero (Wanted).[rssbreak]

In The Last Station, the charming Scots actor tones down his charisma to play Valentin Bulgakov, a young, impressionable admirer who jumps at the chance to meet his idol, the aging Leo Tolstoy (Christopher Plummer) – and quickly finds himself embroiled in a battle of wills between Tolstoy’s imperious wife (Helen Mirren) and prying publisher (Paul Giamatti).

McAvoy spoke from L.A. during a lunch break, sneaking in the occasional bite of a sandwich.

The Last Station casts you as a bit player in a larger story – a celibate, frustrated and disillusioned young man who’s treated as a pawn by everyone around him. How did you approach that role after starring in Atonement and Wanted?

I read the script, loved it and connected to it immediately. I responded to the fact that it was a historical drama about lofty writers and thinkers and yet it was funny. Working in an ensemble was exciting, too.

Your job as Valentin is to sort of prepare us to meet this living god, and then Christopher Plummer shows up in a nightshirt, bellowing about breakfast.

Right – introduce him as a messiah, and show him as just a man. A thinker, a philosopher, a man who came up with a new design for living every week and didn’t live by any of them. You could argue that he was a bit of a hypocrite. We never really go into this [in the movie], but we could have been quite harsh to Tolstoy. He went on about celibacy all the time, but he was fucking anything that moved! He talked against the ownership of private property, yet he owned so much property. He didn’t live his life the way he told people to – and yet, does that make his fantastic ideas any less fantastic?

Are you planning to shift back and forth between big studio pictures like Narnia and Wanted and smaller films like this?

I did Narnia because it was a good opportunity and all that, but really? I wanted to play Mr. Tumnus because he’s my favourite children’s character. That was awesome. And after that, it’s just the same with every single job. “Is this is a good script? Is this a good character? Would I have fun doing it? Let’s go and give it a bash.” With Wanted, it was slightly different – “Yes, it’s a good character, I do think I’ll have fun playing it.” But also, there’s a 14-year-old boy inside me who gets to do the action shit. And I can’t deny the 14-year-old boy. He gets very excited about it.

The Internet claims that a Wanted sequel is in the works, but given the way that movie wraps up, it seems awfully unlikely. Is it happening?

They want it to happen. I don’t know if it is. I’m still working to get a script. But definitely, Wanted 2 is wanted by Universal.

James McAvoy on the challenges of a biopic:

McAvoy on his collaboration with director Michael Hoffman: