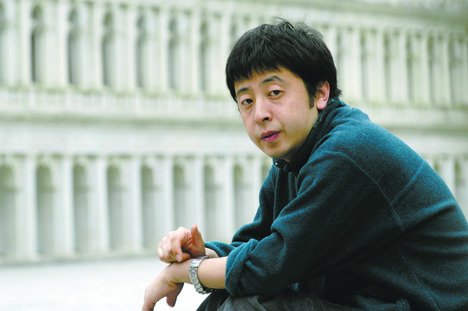 Jia Zhang-Ke makes movies about people living through change. In film after film, he’s chronicled the struggle of everyday people to make sense of a world in flux – between the real and the artificial, between rural and urban lifestyles, old traditions and new customs.[rssbreak]

The films he’s produced over the last decade paint a fascinating portrait of his native China, charting the shift from communism to capitalism and the effect that societal transition has had on younger generations.

Three of those films – Platform (2000), The World (2004) and Still Life (2006) – made it onto TIFF Cinematheque’s “alternative” list of the decade’s best films. Jia will be in Toronto to introduce their first screenings this weekend: Platform tomorrow (Friday, January 22) at 7 pm, and Still Life and The World Saturday (January 23) at 7 and 9 pm respectively.

On the phone from Beijing, he talks about the concerns and obsessions he sees when he looks back at his work.

“It’s the theme of the new economics of China,” he says through an interpreter. “Years and years of tradition are being essentially destroyed and replaced with new customs that are still forming. In the cities, certainly, the changes in the economy have greatly affected everyday life and changed the path of the average person in a way. It affects their outlook on the future.”

Watching the films sequentially, you can see that theme develop from subtext to overriding concern. Platform is about a 1980s provincial theatre troupe coping with the invasion of Western culture. The World is set among the young workers at a Beijing theme park. And Still Life follows its dazed characters through a village about to be obliterated by the Three Gorges Dam project. The plots of Still Life and the subsequent docu-fiction hybrid 24 City (2009) revolve around destruction, demolition and urban renewal.

“In Still Life specifically, these people on the mountains were forced to leave their traditional, everyday lives,” says Jia. “I really feel for their struggles and the challenges they’re going to face as the world changes before them. I want to make sure we understand that whatever happens, whatever their new lives will be when they leave the mountains, their lives will go on.”

Making Cinematheque’s Platform screening doubly special is the fact that Jia will be introducing Toronto audiences to his cut of that film, which runs nearly half an hour longer than the international version.

“It’s about travelling performers, and they go from town to town,” he says. “In the extended version, they make more stops.”

Jia’s artistic reputation and international success – 24 City was applauded by the black-tie crowd at Cannes – is coloured somewhat by the fact that his first four features, including Platform, remain banned in his native land.

“The film has hit the black market on DVD,” he says, “so people have seen it they’ve had access to it that way. But it’s still not officially available in China.”

Most Torontonians will likely have discovered Jia’s films on video, as well – though he’d certainly prefer to have people see his films theatrically whenever possible.

“That’s my intention,” he says. “On a much bigger screen you can get a better sense of the lighting, the angles and specifically time and space. That’s much better captured on a larger screen.”