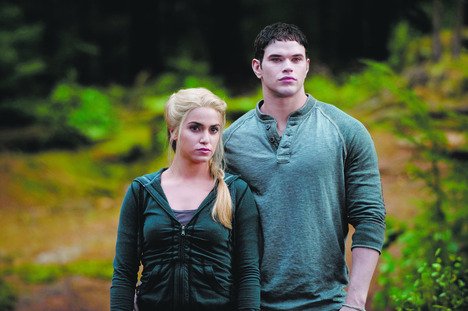 Nikki Reed and Kellan Lutz show their teeth at the box office this week.

For you non-Twihards, Emmett Cullen (brother to Robert Pattinson’s brooding Edward) is the charismatic bloodsucker he plays in the insanely popular series of movies, including the just-released third instalment, Eclipse.

When I enter the hotel suite for our interview the morning before Lutz struts the red carpet at the MMVAs, he’s already got some obsessed fans. He spends a solid minute of our allotted time on the Four Seasons hotel balcony, waving to the girls on the street below.

“They wanted to meet me afterwards,” says Lutz, sporting an apologetic grin and new raven-coloured locks. “They wanted me to take off my shirt.”

Forget it, girls. Lutz saves the shirt-taking-off for serious journalists. Like moi.

“I’ve never broken a bone in my body, even though I’ve done some extreme things,” he says, about doing his own stunts in Eclipse (“about 90 per cent,” he says) and other films.

“I love getting injured. But I get cut up a lot.”

As if on cue, he lifts up his shirt, revealing the chiselled torso and abs that grace the cover of next month’s Men’s Health magazine. At the top of either pec, hidden by a bit of stubble, are two small half-moon scars.

“It was a double knife fight with machetes, that’s why I got two,” he says. “These scars remind me of what I did and what movie I got it on” – in this case, upcoming actioner The Killing Game – “or what stupid thing I tried to do.”

Lutz obviously knows that his hunkage – combined with the exposure of the Twilight series – has opened doors. He doesn’t have much screen time in Eclipse, but he’s biding his time. In the next couple of years, you’ll see him a lot – in much bigger roles.

Later this year he stars opposite Mandy Moore in the romantic comedy Love, Wedding, Marriage. In 2011 he’s got the aforementioned Killing Game, a Bourne-like thriller starring Samuel L. Jackson, and Immortals, an epic fantasy film in which he plays the god Poseidon, which he’s currently filming in Montreal.

The Bourne reference is telling. He mentions Matt Damon among the group of actors he admires and hopes to emulate.

“Jason Statham’s awesome, but Damon’s the action guy who gets hurt,” he says. “He can do a comedy or drama – he was amazing in Invictus. He’s always mixing it up.”

On the climactic battle scene:

What Emmett thinks of the Bella/Edward situation:

On the upcoming films The Killing Game and Immortals: