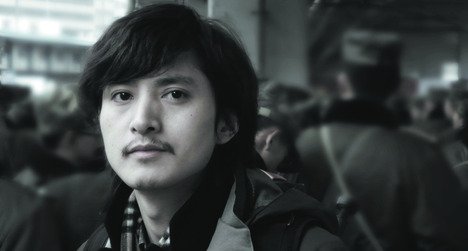 Having just returned from my first visit to the U.S. since the attempted plane bombing at Christmas, I can report that flying across the border via Pearson is brutal: a two-and-half-hour wait, hordes of herded travellers. But compared to the migrant workers’s ordeal in Lixin Fan’s documentary Last Train Home, my trip was a breeze.[rssbreak]

Fan’s emotionally gripping film tracks Changhua Zhang and Suqin Chen, two among 130 million Chinese who live and work in their big-city factories and visit their families back in the village only at the new year.

The story is both heartbreaking and astonishingly intimate. Fan was lucky to find a couple so willing to open up.

“They hesitated at the beginning,” he says, choosing his words carefully. His publicist tells me he’s worried about his English, which is ridiculous – he’s absolutely eloquent.

“In an ever-shifting migrant world, personal trust is hard to get in a short period of time. People come from different parts of the country. One day they’re on the production line, and the next they could disappear.”

As a camera operator for CCTV’s news group in China covering stories in remote areas, Fan got a feel for the vast rural society and the disparity between rich and poor.

“I see it as a sort of irony,” he says. “If you just look at the scenery you want to have that pastoral life, but behind that scenery is poverty, a miserable life and not that much hope, especially for the younger generation.”

The film’s centrepiece is a sensational sequence showing the mammoth crowds trying to board their homeward-bound trains. In 2006, when the crew was shooting, a snowstorm triggered an electrical blackout that kept trains from departing, forcing people to wait for days at railway stations. The sea of jostling humanity, expertly shot, is a breathtakingly scary sight – almost like a war zone. Fortunately, the crew had a plan for keeping track of their subjects.

“It was a huge logistical challenge,” Fan says, “but we used small cameras. And we gave the parents a wireless microphone so that when they got lost they could speak into it and my cameraman could pick it up.”

Another moving sequence is much more private. The two parents, away from the brutal hardship of their factory, where they eat in a cafeteria and sleep in a tiny cubicle, have to face their profoundly alienated children. In an all-out family battle, daughter Qin tells Changhua to fuck off, turning to the camera to say, “See, this is the real me.” Her father, previously only stoic, loses it and strikes her.

Fan had a difficult choice to make: let the camera roll or intervene to stop the violence. Eventually, he stepped in to separate them.

“It’s a tough choice. You’re making a documentary film, and you have to be ethical. I wanted to address a bigger issue, but not at the risk of hurting the family.”

Essential to Fan’s perspective – and the film’s emotional resonance – is the fact that he blames no one for the painful working conditions and wretched family situations, even the Chinese authorities.

“No one has a choice,” he says emphatically. “The girl was born to the countryside and has no opportunity. The parents have to leave their children behind. The factory owner doesn’t share profits with the workers because the government is taxing him. The government taxes because it has to maintain a comparative advantage in exporting because the country depends on it.”

Next time you see an iPhone, remember that it’s not made in China, just assembled there, and as Fan puts it, China ends up getting only a crumb of the pie.