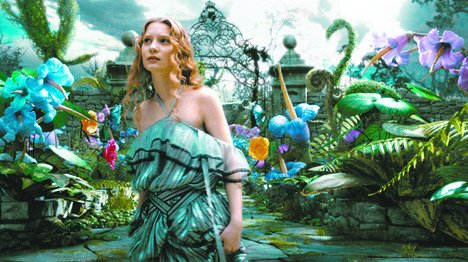 Mia Wasikowska’s life is about to enter a whole new level of weirdness.[rssbreak]

That’s fitting, because she’s playing the title character in Alice In Wonderland, Tim Burton’s take on the surreal children’s classic. Her recognition factor’s growing as fast as Alice after downing that Drink Me bottle.

“I don’t know how to prepare for this sort of thing,” she says in a Toronto hotel room, at the beginning of a worldwide rollout for the film. Now 20, she’s mature and composed, with a boyish haircut and soft Australian accent.

“I’m sort of taking things as they come, trying not to anticipate it too much.”

This isn’t exactly how she felt when she heard she got the role, beating out hundreds of hopefuls. She’d just arrived back in Canberra, Australia, from her fourth audition in London when she got the news.

“I had this deep feeling of doom because no one had called me for three hours,” she says. “I was thinking my phone had stopped working. But then I got the call and was just so excited. I said a procession of words that I will not repeat. I was basically in total disbelief.”

Ask her about her favourite Burton film – Edward Scissorhands – and you can see why the director himself calls her an old soul.

“The amazing thing about Tim is that he articulates his thoughts, feelings and life experiences through this amazing visual language,” she says, clearly excited. “That wide shot of the town as all the cars pull out at once says a thousand things about the place. There’s also this incredible humour. And it’s a beautiful story about a gentle, misunderstood man.”

Alice’s special effects required lots of acting opposite green screens, but Wasikowska says the tech, ironically, helped her out.

“Sure, it’s weird when you’re speaking to a tennis ball on a stick, and a guy in a green suit is waving it around,” she says. “It’s bizarre and uncanny – all the things that Wonderland is supposed to be. But it also takes a lot of energy to remember your environment, who’s supposed to be opposite you. It’s a whole different acting style.”

Not that she didn’t get to act opposite A-list stars like Johnny Depp, Anne Hathaway and Helena Bonham Carter.

“I grew up watching them, so to find myself amongst them was surreal,” she says. “After a few minutes of talking to them, that left and I got to see them as real people, not just celebrities. At one point they were all in the position where they were the newcomer and intimidated. So they made me feel very comfortable.”

Wasikowska’s plate is full. This summer she stars in Lisa Cholodenko’s The Kids Are All Right as the daughter of lesbian moms (Julianne Moore and Annette Bening) who seeks out her biological dad (Mark Ruffalo).

She just filmed a Gus Van Sant picture and has been cast as the lead in a new version of Jane Eyre.

But so far, her favourite acting experience has been playing Sophie, the suicidal gymnast in the first season of HBO’s In Treatment – her breakout American role and a challenge for an actor of any age.

“A part like that is rare and special, something that actually captures what adolescence is like,” she says, clearly happy to be talking about it. “I never quite identified with most teen movies. But Sophie represents a whole lot of teens. Hopefully, through her, people can realize they’re not alone.”

Wasikowska on the audition process:

On working with director Tim Burton: