Michael Cera mixes up his shtick by playing a nasty sociopath 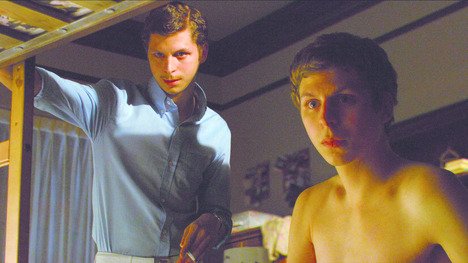 Bramptons baby-faced star says he just wants to have a good time and tell a story.

No one else does what Michael Cera does. From his breakout role on Arrested Development through movies like Superbad, Juno, Nick And Norah’s Infinite Playlist and Year One, Cera has refined stammering and muttering into the stuff of high art – and high comedy.

So it’s interesting to see him change things up in Youth In Revolt, which casts him in the dual role of twitchy virgin Nick Twisp and his imaginary alter ego, the blue-eyed, chain-smoking sociopath François Dillinger. (The downside? Cera is so much fun as François that it’s less fun hanging around Nick.)

The day after Youth’s debut at last year’s Toronto Film Festival – and just hours before the movie would be unceremoniously rescheduled from its planned October release into the dead zone of January – Cera was happy to talk about the complexities of acting with himself.

“Well, there was this amazing special-effects supervisor, Gray Marshall, who did Adaptation,” he says, folding himself into a chair. “His attitude was, ‘Shoot it the way you’d shoot two characters.’ Don’t yield to the logistics of it, just figure out how you’d shoot it with two people and go figure [the effects] out from there.”

Youth In Revolt is Cera’s first solo vehicle after a series of co-leads – and the strength of the François Dillinger scenes would seem to point to the limitations of that shruggy, nervous persona. Is he worried about being typecast?

“No,” Cera says. “I mean, people can send whatever scripts they want to your manager and agent, but nobody can make you do anything. I just think about who the person is that I’m working with and if I can trust them and do good work and have a good time and tell a story.

“If it’s something I can fit into and feel like I can be part of the story, and not just be trying to do a certain thing or look a certain way, or have people think of me a certain way – you’ll drive yourself crazy if you think like that.”

“He was workin’ hard, you know,” Cera says of Wright. “He was here for eight months, he’s been working on the movie for, like, four years, and he’s got all this post now that he’s gotta do. But he just blew me away. There was a lot of stuff to juggle – big responsibility, big cast, big budget – and he pulled it off.”[rssbreak]

Michael Cera on carrying his first movie and working with a large cast: