Less with Moore: The voice of working-class anger looks at economic collapse and says, “I told you so” 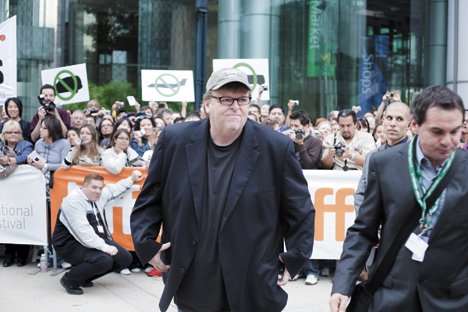 Twenty years ago, Michael Moore arrived at the Toronto Film Festival with Roger & Me, which documented the layoffs at the General Motors plant in his hometown of Flint, Michigan.[rssbreak]

The film won the People’s Choice Award, was picked up by Warner Bros. and turned the shambling, ball-capped filmmaker into an icon of working-class anger.

Moore’s newest film, Capitalism: A Love Story, opens with a callback to Roger & Me’s central theme: as Flint goes, so goes America. Two decades later, the dream of American prosperity has indeed turned into a national nightmare of foreclosures and systemic failures.

Back at TIFF 2009 to do interviews for the new movie, Moore is talking about how weird it is for all of us to be there, now, again.

“I was making it on the 20th anniversary of Roger & Me, so that was weighing on me,” he says. “And seeing Flint in absolute collapse and General Motors actually going bankrupt during the year that I’m making this film – I really felt it was important to not pull my punches.”

Moore says it wasn’t entirely surprising to watch GM go under while he was working on a film about the American economy.

“By this point I’m kind of used to this stuff happening,” he says. “I start out a bit ahead of where things are at, not because I’m prescient or anything – but, for instance, I have a feeling that there aren’t going to be any weapons of mass destruction and I say so, even though I’m not a weapons inspector. Or this company, General Motors, isn’t going to exist – is going to collapse on itself if we don’t pay some attention to this.

“My movies have been trying to say these things. So I start it before the crash, the crash happens, and I go, ‘This is bad for everybody, but good in the sense that now we’ll be able to explain this a little more clearly. As opposed to warning people it’s going to happen, it’s happened.’ So it made my job a little bit easier.”

Capitalism finds Moore mining his own backstory for the first time in a while, using his family’s history to point out what life used to be like for the average American worker. In the 1960s, his father’s job at a spark-plug plant in Flint allowed the family a standard of living that would be considered upper middle class now, with annual vacations and a new car every three years. Now the site of the plant is an empty lot – like most of Flint. But that’s just one element of the massive, tangled narrative, which finds Moore taking a kitchen-sink approach to storytelling and shoving everything he can onto the screen.

“I sort of started with this attitude of ‘What if they didn’t let me make another movie after this? What if I weren’t able to get the money, or theatres wouldn’t show my movies? If I could make one last movie, what would that movie be?’ I sort of operated with that attitude. ‘Let’s go for it here. Let’s make sure I say everything I want to say.'”

And is he happy with the result?

“I don’t believe a movie should be over two hours,” he says, “and this thing runs two-oh-five with credits. That’s too long for my own personal rule. So clearly, if it runs two hours and five minutes, I had a lot of stuff, and I was trying to squeeze as much as I could into those two hours.”

Michael Moore on how ordinary Americans feel about the state of their economy:

Moore on laughing off the right-wing noise machine:

Moore on movies, radical distribution concepts and owning his own theatre: