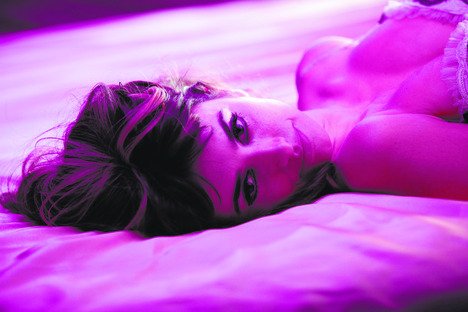 Dressed to the Nines: Penelope Cruz says she panicked taking on a musical. It doesnt show.

Glamour can be a strange thing. Look it in the eye and it’s barely there.[rssbreak]

This season, she’s back home in Spain with artistic soulmate Pedro Almodovar in Broken Embraces and – for something completely different – she’s a song-and-dance performer in Rob Marshall’s adaptation of the Broadway musical Nine.

It’s Almodovar who’s got this versatile performer’s undying love. In the noirish Broken Embraces, her fifth collaboration with the Spanish director, she plays Lena, who years earlier was actor and muse to filmmaker Mateo. He is now blind and creatively bereft.

It’s a powerful, nuanced performance, and of course she gives writer/director Almodovar all the credit.

“All of my experiences with Pedro have been unique and amazing,” she declares at a TIFF round table. “He shows great imagination with me, believing I can do things I have never done before.”

One particular scene in Broken Embraces sent Cruz into an emotional flashback.

“The moment Lena meets Mateo the director and tells him she wants to be an actress – I couldn’t do it without crying. I was getting the feeling back of meeting Pedro when I was 17, and I was thinking, What would my life have been had I not been able to share with him that I want to be an actress?’ I had to cry between takes.”

Cruz is versatile both as an onscreen performer and as an artist who’s had to adjust to her directors’ hugely divergent processes.

“Pedro rehearses for two to four months with the actors. We do all the scenes and we do them in different ways, trying to find something new. You never feel, Okay, I have it under control.'”

Woody Allen does just the opposite.

“I got a message saying, You have two hours to read the script and return it,'” she says about Vicky Cristina. “I followed the rules and I called the same day and said, I love it, I’ll do it,’ and then I didn’t see him again until we were doing hair and makeup. Woody asks you to improvise Pedro doesn’t. It’s a very different system of work. I love going from one to the other. It’s a great exercise.”

Nine, Marshall’s screen adaptation of the musical based on Fellini’s 812, is Cruz’s first full-on musical. Looking at her performance, you’d never know that the prospect threw her into a complete panic.

“The first time I saw them putting together the number, I thought it would be impossible. The biggest challenge is you have to sing and dance at the same time, you have to breathe in the right places.

“I had two months to prepare, but when you feel that yes, it’s going to happen,’ the feeling is amazing. You fly.”

“Most of the time when I work in my own language, I do a different accent, so I have a dialogue coach and have to think about that.

“It was harder to work in another language at the beginning. I couldn’t have a conversation in English and was thinking a lot about the words when I was acting, and I didn’t like that feeling. I wanted more freedom.”

And, just for the record, no star is so bright that Oscar doesn’t matter.

“You want it,” she admits, “for you, but also for all the people who are rooting for you. The statue travelled with me for a while – I didn’t want to leave it alone. Now all my friends and family want to spend time with it.”

Then she adds with a laugh, “They all talk to it.”