The first-time director talks toxic masculinity, the N-word and growing up with hip-hop and skater culture 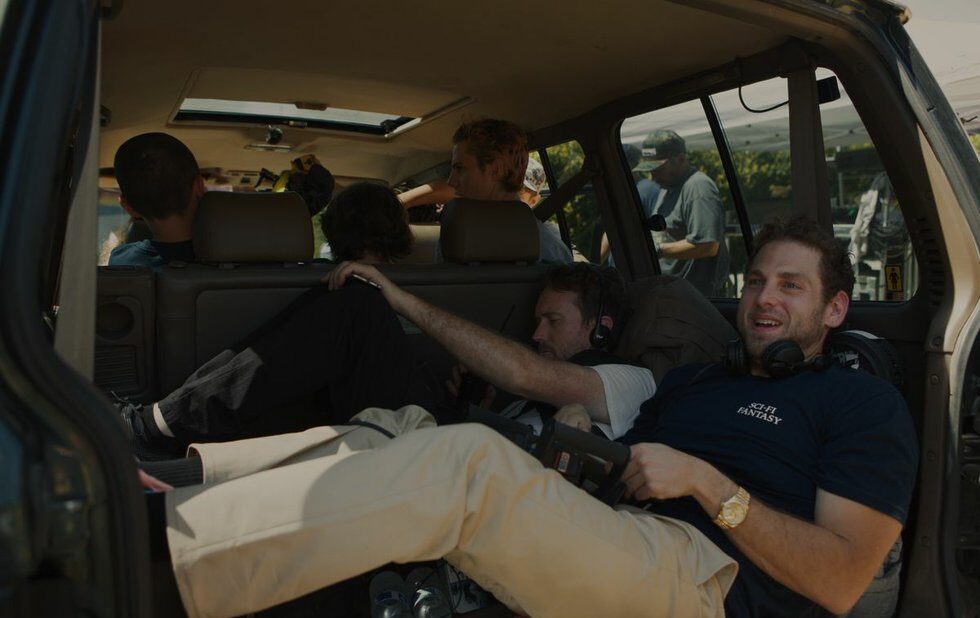 Jonah Hill is cautious when talking about his characters using the N-word.

In an interview last year, I asked Lena Waithe about the contrast between her and Greta Gerwig, both being artists who tap into their own experience and culture in their work.

I bring this up now because it gets more complicated when prescribing a colour to Jonah Hill’s aesthetic. The Superbad star’s Mid90s, his own Lady Bird-like coming-of-ager, opens in theatres this weekend.

But while Gerwig’s white aesthetic featured vintage dresses and the Dave Matthews Band on the soundtrack, Hill’s is baggy jeans and sounds from A Tribe Called Quest and Wu-Tang. He’s still got a white aesthetic (I think), but with deep affection for Black culture. Again that’s totally fair.

The actor turned writer and director spins a story about a 13-year-old (Sunny Suljic) from a single-mom, low-income household who spends his days loitering with skater boyz with an eclectic selection of period-specific hip-hop tunes on the soundtrack. It’s a slight, charming and regularly hilarious slice of life take on being young and impressionable that Hill also describes as a love letter to hip-hop and skater culture, two things he says are deeply embedded in his DNA.

“Skateboarding and hip-hop are often butchered in film,” Hill explains over the phone from LA. “It’s usually shown with people driving through the hood or popping bottles of champagne, what I find is a disrespectful way.”

He’s got a point. Apart from docs and biopics like Straight Outta Compton, hip-hop in movies is regularly segregated to crime movies (from New Jack cinema to the new SuperFly), dance movies (like Save The Last Dance) and the Fast & Furious franchise.

“To me, [hip-hop] was the emotional backbone of my growing up,” says Hill. “I wanted to make an elegant film that showed that A Tribe Called Quest to me were what the Beatles were to my parents and to show it as a true high art form and something that really means something to a generation of people.”

You’d have to go all the way back to F. Gary Gray’s Friday and John Singleton’s Higher Learning, movies actually from the mid-90s, to find hip-hop films that resemble a simple coming-of-age tale. That’s why seeing the Mid90s laid-back trailer, with Wu-Tang’s Tearz on the soundtrack, had me excited. But having such a story told by a white male filmmaker does raise an eyebrow.

For the most part, Hill acquits himself well. His story is about a little white kid, Suljic’s Stevie, who hangs on to this culture and positions himself awkwardly when conversations around race come up. Hill, much like Stevie, is cautious, particularly when some of his characters repeatedly wield the N-word, homophobic slurs and refer to women as “bitches.”

“I personally hate a lot of the language and a lot of the toxic masculinity in the film,” says Hill. “My choice as a filmmaker was to show it honestly and uncomfortably real.

“I’m not a moralist. I feel the most respectful thing to do is to tell the truth and let the audience have enough respect for me to decide how they feel about it. I have African-American characters saying certain language that people around me at that time said. I don’t have white characters saying it. It’s not terminology I personally use. It was how friends of mine spoke at that time.”

But while caution is the right choice, especially for someone in Hill’s position, it could also feel like a limitation. I mean, if we were being honest, the white kids in this story would have gotten overly comfortable with the N-word, too.

As I pointed out in my TIFF review, the film also feels limited when dealing with Ray, the oldest and wisest among Stevie’s new group of friends. Played with light comic touches and a deep emotional reserve by star skateboarder Na-Kel Smith, Ray happens to be the most obviously Black in the group. The others are either white or mixed. The others are also flawed and regularly do or say troubling things, while Ray is as unimpeachable as Sidney Poitier in Guess Who’s Coming To Dinner.

When I question whether this character makeup is more of Hill’s cautiousness, the director bristles.

“How I feel right now in this conversation is that you have an opinion about these things,” says Hill, who’s not wrong.