The Big Sick star sounds off on arranged marriages (they're not so bad!), dealing with autobiographical material and finally embracing being both Pakistani and American 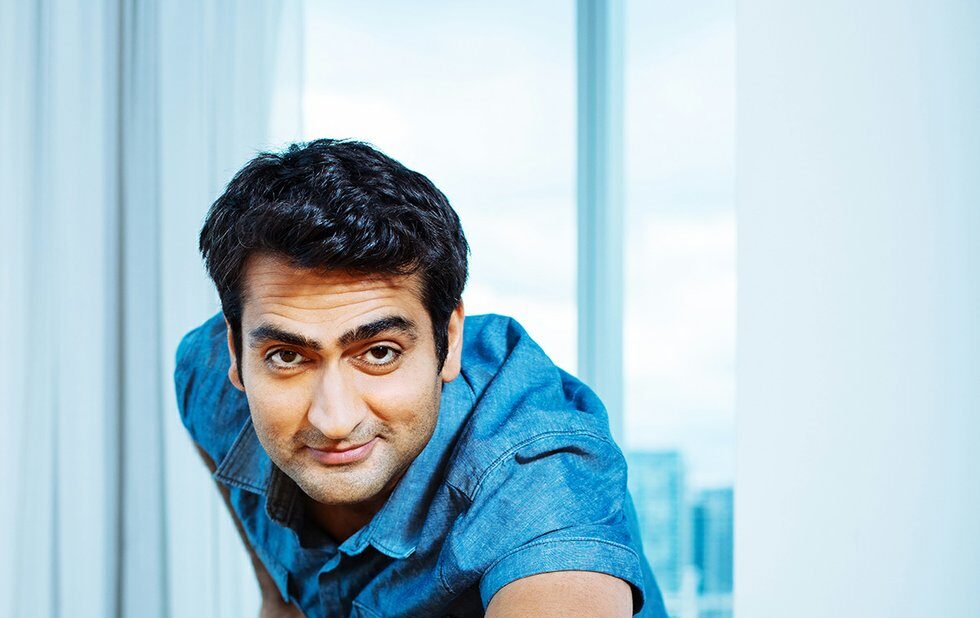 When the trailer for the The Big Sick dropped, writer and star Kumail Nanjiani noticed that not everyone was excited about a rom-com starring a Pakistani-American lost between two cultures.

“I saw a lot of Desis on Twitter groaning, ‘Oh, it’s another movie about arranged marriage,’” says Nanjiani when I sit down with him during a New York press stop. He points out that arranged marriage is on the list of practices that are used to negatively stereotype South Asians.

“It’s almost like they’re ashamed of it. I don’t think there’s a reason to be ashamed. I’ve seen great relationships come from arranged marriages. I totally understand the advantages. You and I didn’t choose it, but it works for a lot of people. I think you can bring it up and talk about it and explain it. It’s not something to be ignored.”

Nanjiani hopes The Big Sick’s depiction of arranged marriage will change perceptions of it, which is ironic since the movie is about how he eluded the institution.

The sweet, funny and timely semi-autobiographical comedy, written by Nanjiani and his wife, Emily V. Gordon, revisits their first year together, when their casual relationship takes a serious turn after a traumatic illness.

Nanjiani plays himself at a moment when he led a double life. The film’s Kumail pretends to be a devout Muslim at family dinners but sheds that skin as he enjoys the typical urban bachelor life in Chicago. And while he’s falling for a white girl (Zoe Kazan), he goes along with blind dates orchestrated by his mother (Zenobia Shroff), never hinting at how far he’s straying from her planned arranged marriage to a fine Pakistani prospect.

Nanjiani and Gordon could easily have treated arranged marriage as archaic and repressive, a vilified institution getting in between the central Montague and Capulet pairing. But instead, they explore arranged marriage as it is often handled today, a culturally specific matchmaking service.

“It’s not a bad system,” says Gordon in a separate conversation. She points to a good friend from college who went through the process, and recalls dancing at her wedding, a joyous occasion.

“I’ve been shown through pop culture that it’s a very oppressive system and everybody should be rejecting it,” says Gordon. “But my genius friend, who is smart and gorgeous and getting her graduate degree, went very willingly into this experience. That’s what she wanted to do, and that’s what she negotiated with her family.

The stigmas around arranged marriage often involve the race and class-based restrictions, not to mention tragic cases of forced marriage, which is an entirely separate thing – an act of violence and a human rights violation.

Meanwhile, young Pakistanis, Indians and Sri Lankans are reclaiming arranged marriage, deciding on their own terms what cultural guidelines to follow. In Toronto’s Tamil community, there’s practically an industry operating similarly to wedding planners, with brokers (not unlike real estate agents) who help find the right partner according to preferences. Criteria could be the usual involving age, physique and financial independence, or could be about caste, complexion or astrological harmony (yes, that’s a thing).

Nanjiani points out how arranged marriage has evolved to include matchmaking websites like Naseeb.com or Shaadi.com. “Ishqr is like Tinder for Muslims,” he quips.

If the process doesn’t have the same romantic narrative qualities as other “how we met” stories, which is perhaps why so many young marrying couples shy away from explaining it, Nanjiani has a great big “pshaw” coming your way.

“How you meet is such an overrated thing anyway,” says the guy who has a movie about how he met his wife. To be fair, the meet-cute is a brief intro in The Big Sick before things get heavy. 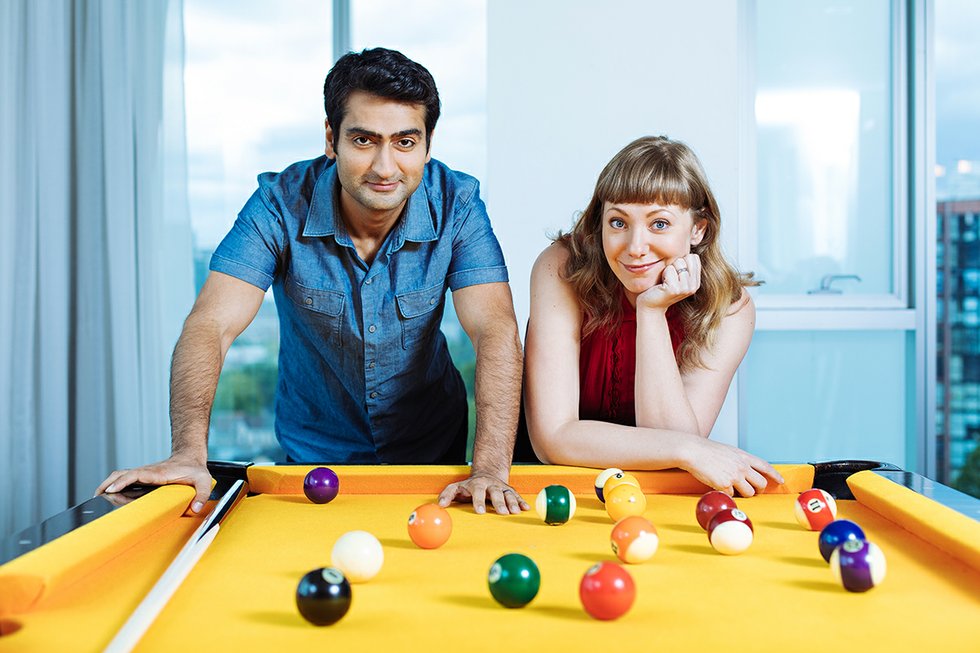 “Other rom-coms really focus on the ‘how we met’ story and mythologize it. They end when the white people get together. I think the interesting stuff happens after that – when they’re together and learning about each other and deciding what parts of themselves they’re going to show.”

Kumail half-heartedly goes on a date with Khadija (Vella Lovell), the latest prospect his mother has lined up. Khadija is not so easy to dismiss. In Lovell’s stellar performance (she’s so good she deserves her own movie), Khadija turns out to be witty and exciting, a girl Kumail would be lucky to partner up with if only his sights weren’t set elsewhere.

When he owns up to his deception, her gently emotional WTF response reminds us that it’s people like her who get hurt by Kumail’s performance for his parents.

Lovell’s “that’s great for you, but what about me?” moment also had me thinking about the power imbalance in that situation. A South Asian male may find it challenging to slip away from tradition as Kumail does. But in a patriarchal culture, imagine doing it as a female.

“Even though it was very difficult for me to break with tradition in this way, I had certain assumptions and powers that are just not assumed for women,” says Nanjiani.

“Generally, being a woman is harder than being a man. There’s an assumption that men have what women can’t have. I can walk around in the middle of the night and not have to worry as much as a woman does. And that privilege is often completely invisible to us.”

The Big Sick’s treatment of women and Nanjiani’s own negotiation with his heritage have become far more pertinent than the filmmakers expected.

They were working on the rom-com while Obama was president, expecting Hilary Clinton to come next. But the film premiered at Sundance on the day of Trump’s inauguration. Female lead Kazan skipped the premiere to attend the Women’s March on Washington.

The film is now caught up in a new atmosphere, representing something bigger than initially intended as gender issues and Islamophobic rhetoric flare up.

And while the world is drawing lines separating nations and races, Nanjiani is currently searching for his own identity, caught between cultures.

Many young immigrants (myself included) are familiar with the idea that you have to choose one, especially in an environment that leads many to internalize the discrimination they experience. Nanjiani remembers how much he wholeheartedly rejected being Pakistani in his late college years and throughout most of his 20s.

“When I came here, I felt I didn’t fit in and blamed my background,” he remembers. “The way people see you differently becomes part of how you see yourself. So then you want to be seen as not being different and you push it all away. You try to get rid of it to be like, ‘That’s not me. That’s who I was. I’m American now.’

“I lost touch with a lot of my friends [from Pakistan]. There was a period where I wasn’t talking to my parents much. Part of me rejecting my culture was rejecting all my connections to it.”

Nanjiani is very close to his parents now and has recently got back in touch with his old friends. He’s trying to find a way to embrace being both American and Pakistani. Part of that process is The Big Sick, in which he revisits a formative chapter in his life with a newfound empathy for his parents and culture, arranged marriage included.

“In the film, Kumail is defying his culture. What comes next is not in the movie. You go back to it and synthesize your identity between American and Pakistani so that you’re not just tossing everything out. You’re trying to figure out who you are.

Hey, where do i know that guy from?

The Big Sick is Kumail Nanjiani’s breakthrough role, but you’ve probably seen him somewhere before.

Nanjiani’s television career started out predictably for an actor of South Asian background. He popped up on The Colbert Report as a Guantánamo Bay detainee imprisoned beneath the host’s desk. Then he was a food delivery guy. That pretty much sums up some of Nanjiani’s big-screen roles for the next few years, listed on IMDB as Pakistani chef (The Five-Year Engagement), delivery guy (The Kings Of Summer) and cable guy (Hell Baby).

He hosts podcasts and comedy specials and takes every bit part on offer, but Nanjiani is perhaps most famous for his regular role on Silicon Valley as Dinesh, an immigrant coder so desperate for money and respect that he often ends up making a fool of himself.

In the much-better-than-expected comedy starring Zac Efron, Nanjiani shows up as an exotic masseur who performs some Cirque du Soleil shit to give a bride-to-be (Toronto’s own Sugar Lyn Beard) multiple orgasms. It’s wild and hilarious but, as Tina Hassannia pointed out in the National Post, yet another example of how Nanjiani has been underused in movies.

He’s a big sharer, and you can catch the comedian’s regular barbs as he tackles whatever shitstorm is brewing online, particularly when it comes to matters of Trump and diversity.