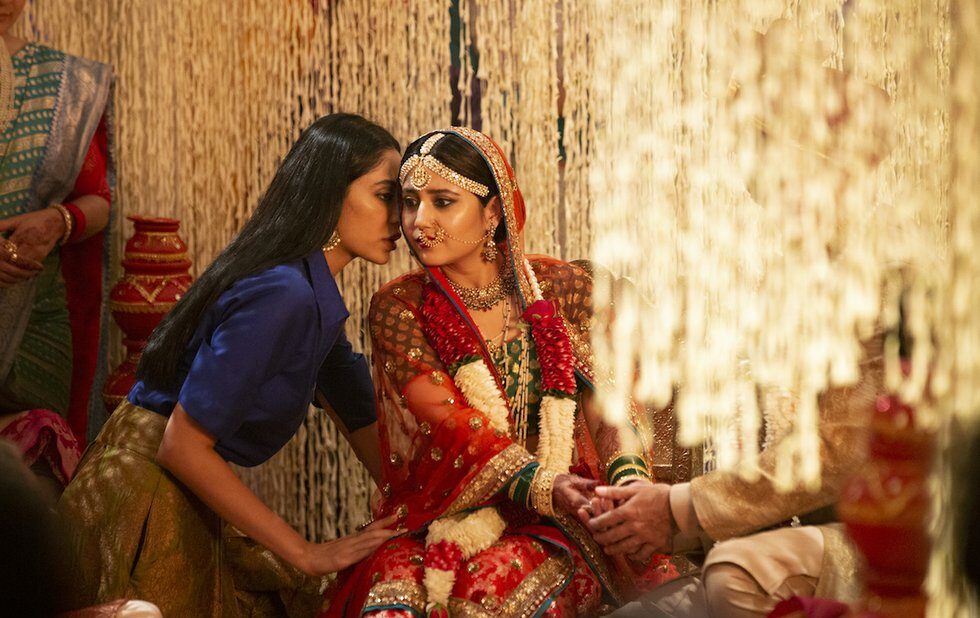 A wedding planner played by Sobhita Dhulipala (left) confers with a bride-to-be played by Shweta Tripathi in Made In Heaven.

Five years ago, I travelled back to New Delhi to attend a wedding in the family. A distant cousin was getting married, which gave me the perfect excuse to attend the festivities but still observe the goings-on as a relative outsider.

Festivities leading up to the main event were held at fancy hotels and banquet halls. A professional choreographer taught family members how to dance. The bride and groom wore meticulously matched designer outfits. I was taken aback at the extravagance, despite being aware of how lavish modern-day Delhi weddings are.

At the same time, I couldn’t help notice how some family members were stuck on antiquated traditions, as well as the usual behind-the-scenes sniping of other relatives. These social realities also play out in Toronto, where South Asian families frequently try to at least keep up with the Sharmas, if not completely outdo them in the grandeur department. Customs like dowry may not be overtly observed, but gift-giving is common, as well following rituals such as matching horoscopes or finding auspicious times for ceremonies (even in the dead of winter).

This sort of drama is the inspiration for Amazon Prime Video’s series Made In Heaven. The show’s all-female creative team is led by Bollywood heavyweights Zoya Akhtar and Reema Kagti, and co-written by Alankrita Shrivastava, and co-directed by Nitya Mehra and Prashant Nair.

The nine-episode series follows the story of wedding-planning duo Tara (Sobhita Dhulipala) and Karan (Arjun Mathur), who run the company Made in Heaven and, as Tara puts it, help “crazy-rich people get married.” Except Tara and Karan end up running interference between the bride and groom and their families as they handle egos, bank balances, secrets and simmering tensions between relatives while also taking care of the catering, wedding decorations and ladies’ sangeet/henna parties.

Then there are their own unravelling lives. Tara comes from a lower-middle-class background and has married up into a wealthy, industrialist family, but can never escape the whispered accusations of being a gold digger. Karan, meanwhile, is a semi-closeted gay man who is out to his friends, business associates and brother, but not to his landlord or parents – a plot point that informs the latter half of the series.

The idea to enter into the marriage space was inspired partially by Akhtar’s friend who runs a wedding videography company, as well as Akhtar and Kagti’s recent experience of attending back-to-back weddings in New Delhi, says Kagti.

“All of it was a delicious backdrop for drama, but we also wanted to scratch beneath the surface,” she says over the phone from Mumbai. Making Tara and Karan wedding planners allowed the creators to bring out the chaos of an Indian wedding.

“All of this was always a vehicle for us to explore Indian society, to make some kind of social commentary.”

Making the series for a streaming service was far more collaborative than the relatively lonely journey of making a film, says Shrivastava in a separate interview. She directed Lipstick Under My Burkha (2016), which ran into trouble with Indian censors for being “lady-oriented” and containing “audio pornography.”

There was also more creative freedom.

“One is free to write on themes that may be considered hard to get passed the censor board in India,” says Shrivastava. “Even though one tries to write with a free mind, even for film, eventually our inner conditioning of knowing we live in India kicks in subconsciously.”

Story ideas came from real-life observations, conversations with friends and newspaper reports. The fourth episode, for example, is inspired by several cases of young Indian women walking away from the marriage altar upon hearing about dowry demands from the groom’s family. Despite dowry being illegal, the tradition continues – sometimes in the form of token gifts to the groom’s family, and sometimes as outright demands for cash.

“It’s a rampant practice,” says Kagti. “In some places, like where I come from – the northeastern state of Assam – dowry isn’t even part of the culture. Somehow it seems to have permeated there now, even though it’s criminalized.”

Often these traditions are perpetuated by parents who otherwise describe themselves as progressive. “Contrary to popular belief, it doesn’t just happen in certain classes. It’s present through all classes,” adds Kagti.

While researching the fifth episode, which takes place in Ludhiana, a major city in the Indian state of Punjab, Kagti found out about “grooming schools for girls” that prepare young women to present themselves as potential matches for North America-based Punjabi grooms. For some women, that flight out of Punjab can come at a heavy price – from grooms making off with dowry money to domestic violence.

“I mean, I didn’t even know [these schools] existed. It just blew my mind,” she says.

While there is a female gaze in Made In Heaven, the production team’s larger goal was to push each other creatively.

“Maybe in being female, one is drawn to stories and lives and characters that don’t necessarily exist in a very heteronormative male, patriarchal space,” says Shrivastava. “Not all female filmmakers [are like that], but many of us [are]. And the digital space feels more fluid and open.”

The long format of a series also offered the chance to create an ensemble cast of characters with several layers.

In writing Karan, who belongs to the LGBTQ community, they wanted to show “what systematic stigmatization over the years can do to an individual person,” explains Kagti.

In fact, when India repealed a colonial-era law that criminalized homosexual activity last fall, Made In Heaven was already in post-production. With Tara’s character, they were also playing with the idea of aspirational India and ambitious women.

Although this social dramedy is framed against an ostensibly frothy subject – the (mis)adventures of two wedding planners – episodes never feel preachy. Made In Heaven ultimately works because its characters feel real, and you become invested in their world. Kagti credits the writers, who liberally borrowed from personal experiences.

“In real life, people are a mix of good and bad,” says Kagti. “They aren’t heroes and villains. They are just people trying to live life.”