Raised in Toronto's Greektown, Marco Kyris is ready for his close-up after spending much of his career in the shadow of a Hollywood A-lister 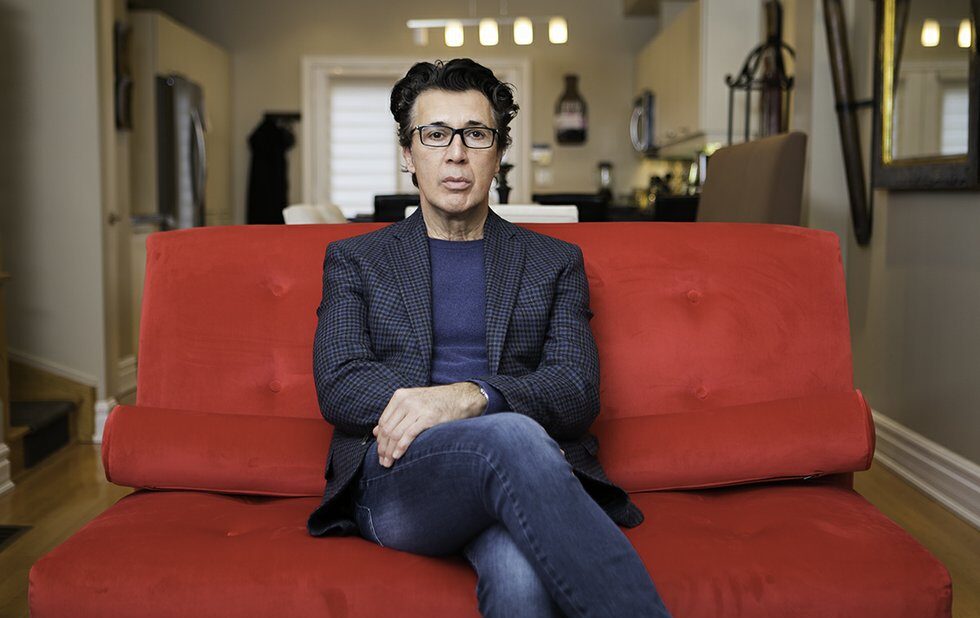 The first time I met Marco Kyris, he was interviewing me.

He hosts a podcast about the film industry called Babble Bullshit And Beyond in which he interviews actors, screenwriters and anyone working in the entertainment industry. He had found me through my book, National Treasure: Nicolas Cage, and asked me to be on the show. My study of Cage, in particular, caught his eye since Kyris – born and raised in Toronto – had also studied Cage, though in a somewhat different context.

For 10 years it was Kyris’s job to watch Cage’s mannerisms and movements, and to mimic them on film sets. He was Cage’s stand-in from 1994 until 2004.

Funded by Kyris and directed by Blake Johnston and Kelso Steinhoff, the short is like a conversation with Kyris. It features fun moments of the former stand-in imitating Cage’s mannerisms, and many photos of the two men dressed like each other on set. But it also examines the damage being a stand-in had on the aspiring actor’s ego, and when we talk about his time with Cage, it comes out.

“It’s usually an insecure person who believes they belong in the shadows,” says Kyris, who created the documentary short as a sort of trailer for his upcoming book project about his life. “Now I’m the man who’s coming out of the shadows. Because I feel like I am worthy and I am good enough, like anybody else.”

Born Evrimahos Kyriakakis and raised in Toronto’s Greektown, Kyris was one of three children in a not-particularly-close family. He moved to Los Angeles in the late 80s to study acting (a move that, he wonders in the doc, may have been influenced by his dysfunctional family), but when he failed to find much success by the early 90s, he moved back to Canada, into a basement apartment in Greektown, and started working in restaurants.

In 1994, Kyris got the call that, as the cliché goes, changed his life. An extras agency he’d signed up with wanted him to come to Niagara-on- the-Lake to audition to be Cage’s stand-in. He got the part on the spot. Then he had to learn what it meant to be a stand-in.

The job is right in the name. Stand-ins stand for long periods of time while crews set up shots that can sometimes take up to three hours to get right. On Kyris’s first film with Cage – Trapped In Paradise, a comedy co-starring Dana Carvey and Jon Lovitz – he was instructed not to talk to the actors. Just observe, stand and be quiet. Talking to Kyris, you see fairly quickly how that last part would have been a problem. So he started to break the rules.

What made Kyris such a good stand-in, he thinks, is that he not only stood well for long periods of time, he observed the shots as they were being set up and relayed information about positioning to Cage so he could better prepare for each shoot. This resourcefulness led Cage to invite Kyris to be his permanent stand-in.

Which means, if you’ve watched many Nicolas Cage films, you’ve seen Kyris in action. He’s the leg that high-kicks Christopher Eccleston off of a warehouse walkway at the end of Gone In 60 Seconds. He’s the hand that jots down the secret codes from the back of the Declaration of Independence in National Treasure (which took some work since Cage is right-handed and Kyris is not). And you know the iconic aerial shot of Cage dropping to his knees, holding up flares at the end of The Rock? That’s Kyris.

Observing Cage for a living, Kyris, like me, was impressed. Particularly during the mid-90s when they filmed The Rock, Con Air and Face/Off, what some call The Summer Of Cage. The unofficial action trilogy was shot back-to-back, and Kyris observed how Cage quickly transitioned into each role.

“I paid attention to everything he did, and it was mesmerizing to see how he would change from character to character, film to film.”

He points specifically to Face/Off, where Cage commits to the absurd scenario that his face has been removed and swapped with the face of the man who killed his son. Coming straight off Con-Air, Cage jumped into a fully realized character by embracing the mental anguish being two people at once would truly cause a person. He headbangs, thrashes and laugh-cries all over that movie, and his ability to stay so consistently over-the-top impressed Kyris.

“This man did every single quirky, wacked-out thing that you can think of exactly the same on a wide shot, a mid-shot and a close-up. That’s what blew me away. I’m thinking, ‘No wonder I’m not an actor. Look at this guy go!’”

Despite the initial humiliation Kyris felt about giving up his own acting career, he did some things better than his boss. Between films he’d come back to Toronto and invest in real estate. By the end of his time with Cage, Kyris had purchased and renovated 12 properties.

“Cage was extremely proud of me during that time,” remembers Kyris.

The star is well known for buying houses, reportedly topping out at 15 homes, including two castles and an entire island in the Bahamas. But Cage’s real estate adventures notoriously landed him in financial disaster.

“It’s because he didn’t rent out his places – he just lived in them all,” says Kyris, who has since sold most of his properties save two houses in Toronto and one in Fort Lauderdale. So while Kyris lives off profits from his investments, Cage has been in the news for debts.

But, as I argue in my book, he only works as much as he does because he’s always looking for new challenges.

“He’s going to work to constantly stay relevant, not to an American market, but to the global market,” observes Kyris, who stopped working for Cage in 2004 in part due to exhaustion.  “He’s clever. Whether I approve or not, I’m not his agent. But he’s doing it because he wants to do it.”