Director Matthew Rankin plunges into the depths of Canadian shame 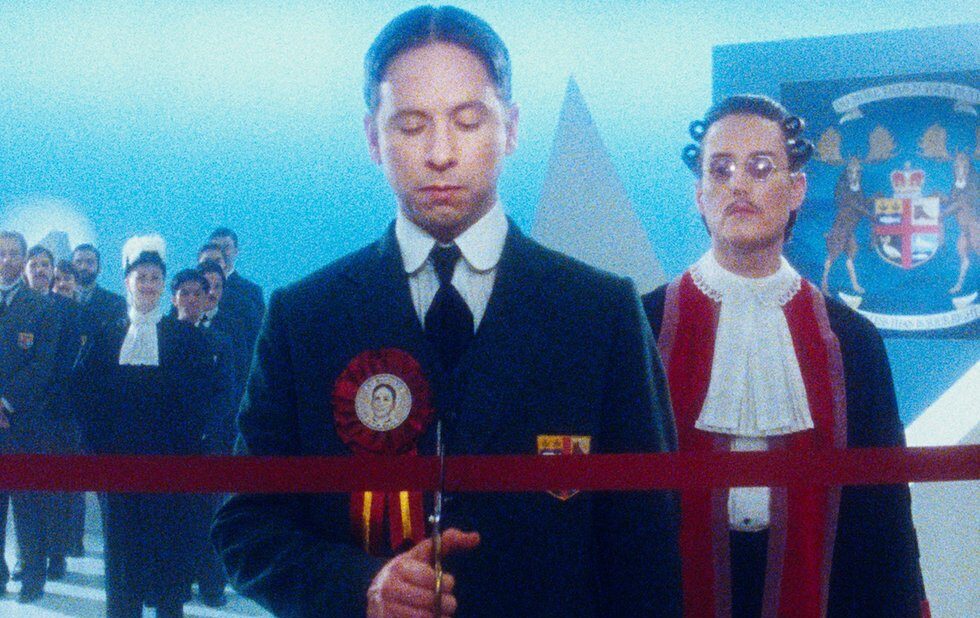 Unpacking Canadian identity isn’t for everyone. In 2016, Canadian actor Donald Sutherland told a room full of reporters at the Cannes Film Festival a joke about a British soldier, a French solider and a Canadian soldier who were captured and sent to be shot by a firing squad.

“They were each given an opportunity to have a last wish,” he said. “The Brit asked for a cup of tea, the Canadian asked for 15 minutes to talk about Canadian identity and the Frenchman asked to be shot before the Canadian.”

When Winnipeg director Matthew Rankin was preparing to make The Twenieth Century, a movie about former Prime Minister William Lyon Mackenzie King’s youth, the response was much the same.

“I remember getting a script note that said something like, ‘When I first saw the synopsis I thought oh god not another one of these nauseating, nameless Kevin Sullivan Entertainment costume dramas,’” the director recalls in an interview during the Toronto International Film Festival. “But they were swiftly convinced that it was not that at all.”

It’s definitely not that.

Set in 1899 Toronto, Rankin follows King (Dan Beirne) who is convinced he is destined to lead the nation – if only he could suppress his Oedipal complex, onanism and deep shame around his general lack of manfulness compared with his square-jawed rival, Bert Harper (Mikhail Ahooja). Torn between the fascist governor general Lord Muto (Seán Cullen) and the renegade Quebec nationalist J. Israël Tarte (Annie St-Pierre), King endures a series of humiliations – involving an exploding cactus, mechanical genitals and , of course, ice skating – on his quest to ascend to the upper echelons of Canadian power.

Shooting in a box aspect ratio on grainy Super 8 and 16mm stocks, Rankin turns King’s life into retro-gross-out melodrama, full of elaborate set pieces that transform Toronto, Winnipeg and Vancouver into Freudian  and nightmarish projections of themselves. Each frame is as visually dazzling as the satire is scathing. Rankin rips into Canadian self-mythology to expose the chauvinistic colonial attitudes that laid the country’s foundation. If Canadian identity is about anything, the film suggests, it’s shame and denial.

Naturally, the movie won Best Canadian First Feature Film at TIFF, where it screened in the Midnight Madness section. (It’s also one of TIFF’s top 10 Canadian movies of the year.)

Ahead of the film’s TIFF premiere, I spoke with Rankin about why Canada is better at shame and propaganda than melodrama and satire.

What’s your relationship to Heritage Minutes?

I think of them as a patriotic propaganda initiative that was devised in response to the Quebec referendum. That’s when they emerged. And there’s something vaguely militaristic about that. I don’t like organized patriotism. At the same time, they do have an impact. The Irish children – they’re so sweet. I did try to make a Heritage Minute one time, and they very wisely rejected my proposition.

What was you pitch?

I wanted to make a a 9.79-second dance film about Ben Johnson, the sprinter [who was stripped of his Olympic medal in 1988 after failing a drug test]. I wanted to reduce that moment to total abstraction and do it all through dance. I’ve never made a dance film, but there’s something about the gesture of sprinting that is like dance. Obviously, this was just way too experimental for Heritage Minutes. Also it’s a little moment of shame.

There’s a lot of shame in The Twentieth Century.

Shame is my specialty.

What do like about unpacking shame, especially in the context of Canadian history and identity?

I grew up in a very pro-shame household, so it felt like something that I understood and it was meaningful to me. Representations of Canada are increasingly zealous and patriotic. I feel like [Canada] was better when people had more shame. In a bizarre way, shame – and it’s preposterous to say this – is a good feeling to have as a citizen. The state can really hurt people and we shouldn’t live in denial about that.

Shame is built into our psyche in terms of Canada’s colonial legacy. Your film isn’t necessarily about the specific violence of colonialism but the attitudes behind it. What isn’t present onscreen is still present.

Fortunately I wasn’t educated by patriots. I was educated by radicals who had a very critical view of Canadian history. One Canadian history teacher I had in high school was a real radical. We learned about residential schools, Quebec nationalism and different modes of identity, which underscored the artificiality of Canada. After the fact, I realized that having that kind of teacher was rare. Most people weren’t learning about that stuff.

Then I went to university in Quebec and I was interested in Quebec nationalism, which I studied at McGill and then at Laval in Quebec City. That underscored the fact that Canada is not some naturalistic, immortal entity that even necessarily has a right to exist. Like, what is a province? What does that even mean? I think it’s really cool that a lot of artists are starting to reassign the place where they live. In Winnipeg, where I’m from, a lot of artists don’t really say they’re from Manitoba, Canada or even Winnipeg – they’ll say Treaty 1 territory. The whole structure around which Canada is organized is a fantasy, and it’s possibly a sick fantasy. It’s good to question that.

Do you see a lot of artists challenging the status-quo acceptance of Canada?

People are doing it in different ways. There is a really exciting resurgence of Indigenous representation that is issuing that same challenge. That’s the future of cinema in this part of the world.

I don’t think there’s any shortage of representations that tell you how great, perfect and wonderful Canada is. Even our attempts at satire just leave you with a reassuring feeling:  it’s Rick Mercer hang gliding with Jann Arden. Our satire doesn’t have a lot of guts. Since Mordecai Richler died there aren’t really any rascals anymore. No one got a break with Richler. Nobody. He had a lot of acid. Satire should be challenging, provocative and it should hurt a little. It should make you uncomfortable.

I wanted everything to feel artificial all the time. The conceit of the film is that Canada might just be totally fake and in this person’s head. And the film is about his head. Everything in the film is drawn from Mackenzie King’s diary and reprocessed. I describe it as a nightmare that he might have had in 1899.

I’m also a lifelong diarist. When I re-read my own journals as a young person, I’m almost physiologically stunned by how maudlin, melodramatic and overheated they are. A diary is very much like a parallel consciousness. It’s not your lived world. It’s a parallel space in which you process information, which is kind of dreamlike. If I was in a very overcharged, empurpled emotional state, the things I would write in this journal would be completely ludicrous. The idea to do the film as a melodrama came out of that.

Do you think Canada does melodrama well?

I don’t know. There’s Guy [Maddin] of course… John Paizs. A lot of Winnipeggers reprocess that form. Xavier Dolan is a melodramatist in a lot of ways. He’s wonderful. The fine line is that you can’t approach melodrama from a literal-thinking view. You have to be aware of irony, but you also have to love this ludicrous expression of emotion that melodrama can permit. I don’t like when people make fun of melodrama. I like when they are aware of the irony, but it’s also very authentic and real for them. It’s not really a form I associate with a Canadian tradition. In Winnipeg, maybe more so. 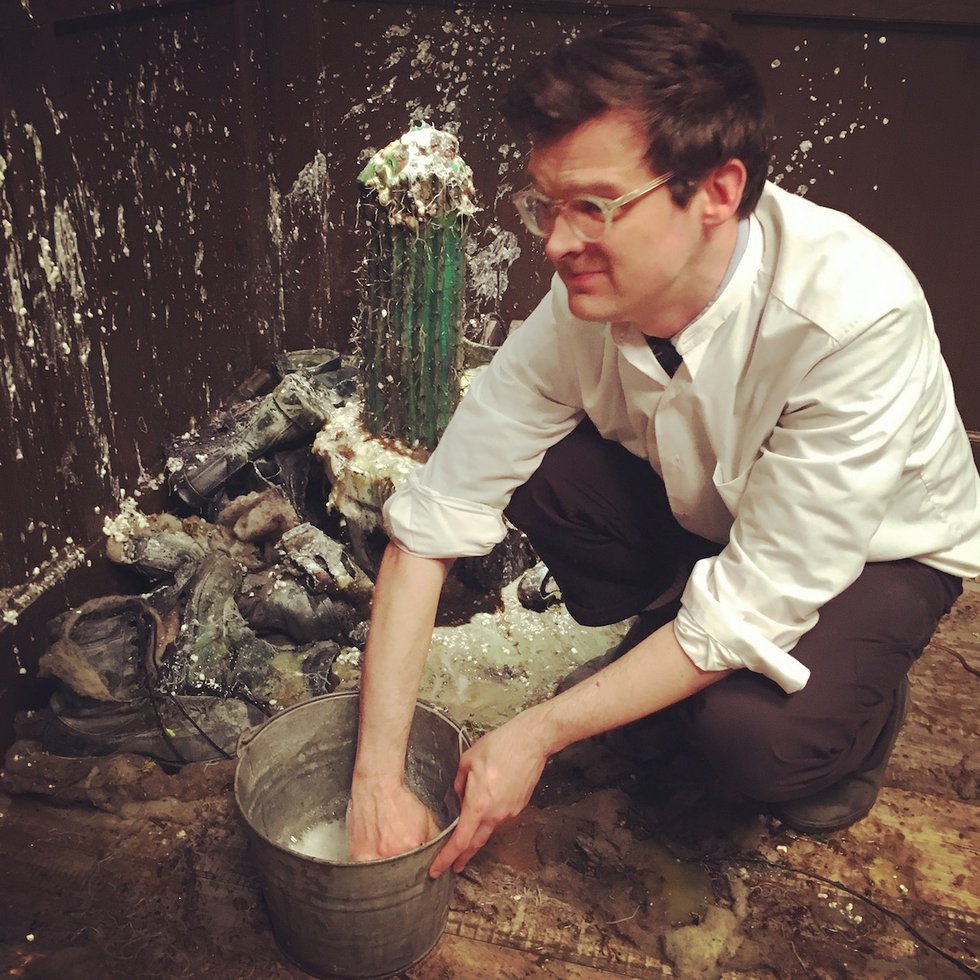 Director Matthew Rankin with his exploding cactus on the set of The Twentieth Century.

Can you talk about your approach to casting and gender representation? The characters encompass a wide spectrum of gender expression.

This is a historical film that’s all about WASPs, but I wanted to take a school-play approach that you don’t see so much in film for some reason. In a school play you can have a Filipino Captain von Trapp and a transgender Artful Dodger and it’s fine. In film, I don’t understand why there’s this pressure to always link an actor to their exact demographic profile.

In the movie, you represent Quebec nationalism in a loving way in contrast to the more unflattering portrayals of Toronto, Vancouver and Winnipeg.

The thing with Quebec is a bit of mischief. There’s this knee-jerk Quebec bashing you see in a lot in Anglo-Canadian representations of Quebec. They are always assessing Quebec through it’s worst expression so they can feel better about themselves. Like, “Of course Quebec is wrong to want to separate from this great place!” There’s a lot of self-serving representations that aren’t very fair. Of course, Quebec does have a worst expression, especially right now, but I wanted to undermine those representations and hopefully make people uncomfortable, including Quebeckers, by turning the idea of Quebec into a New Age utopia.

It was about destabilizing and distressing habitual modes of representation. I tried to do that constantly. It’s the same thing with gender. I only had two people I could think of to play Mother. One is Jackie Burroughs, but she’s no longer with us. The other was Louis Negin, who’s my friend. He’s so loving and sweet, but he likes to be wicked. It was about matching the person with the role regardless of their gender.

What’s the number one thing you think Canadians should reassess about the way we think of ourselves?

We should allow ourselves to be more uncomfortable. The stories we like to tell don’t prepare us for anything but living in denial. This weird debate about whether or not Missing and Murdered Indigenous Women and Girls is genocide was really upsetting. People were uncomfortable. That shows to me that people aren’t prepared to think critically about what this place is and what it means. Canada might just be a fantasy a comforting bedtime story we lull ourselves sleep with.