The British-Tamil musician talked Netflix, Ghomeshi and Chinese investment in Sri Lanka at the Canadian premiere of her documentary 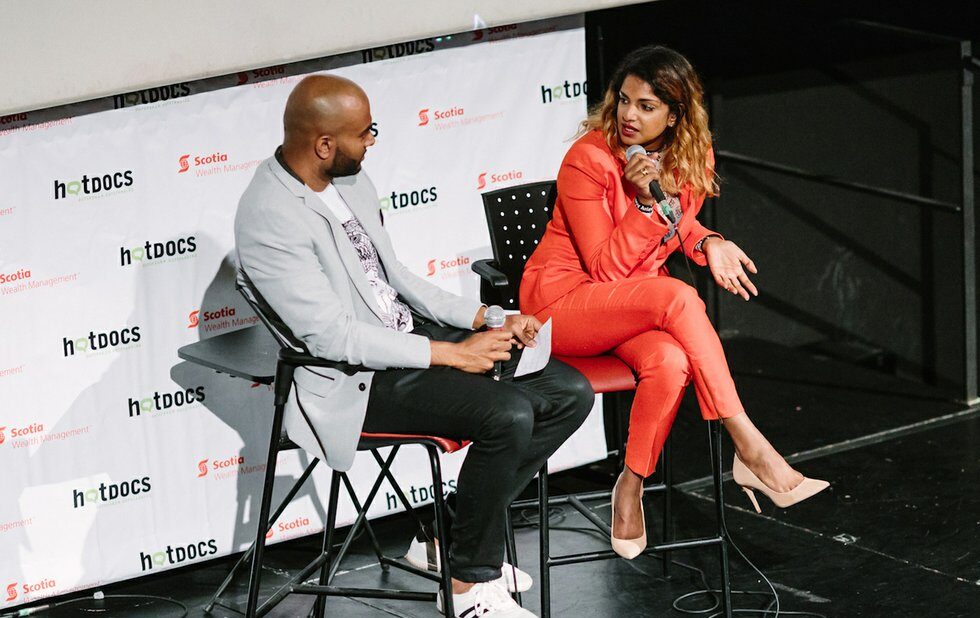 M.I.A. made it to Hot Docs for her movie premiere after a 48-hour travel ordeal. Dressed in a bright orange pantsuit, the British-Tamil musician appeared a bit tired but came through with a lively Q&A with NOW film critic Radheyan Simonpillai following a screening of Matangi/Maya/M.I.A., a documentary about her life directed by her long-time friend Steve Loveridge.

The irony is that M.I.A. never had a problem coming to Canada even when the U.S. wouldn’t grant her a visa. “I’m still pay-as-you-go,” she said of her travel woes.

The film puts controversial moments in M.I.A.’s career – including the Lynn Hirschberg interview, the Super Bowl bird flip and the Born Free music video – into the wider context of her experience as a Tamil refugee who became American-famous and used the platform to call out injustice in her native Sri Lanka in whatever way she could.

It features a lot of self-shot footage of years spent growing up in a tiny flat in a London council estate with her family after they fled civil war in Sri Lanka, and of a pivotal trip she made back there to visit relatives.

Here are five things we learned from the Q&A at the film’s Canadian premiere screening at Hot Docs.

The doc features a handful of archival footage of M.I.A.’s Canadian media interviews between 2005 and 2010, including a cute moment with a group of Tamil girls on a live MuchMusic broadcast and an emo-haired George Stroumboulopoulos describing her career trajectory for his old CBC show.

But when the film cut to M.I.A. appearing on CBC Radio culture show Q in 2010 to discuss her critically panned (and fan-adored) Born Free music video, the audience loudly booed then-host Jian Ghomeshi.

During the Q&A, an audience member demanded to know why Loveridge – who appeared via Skype – would include Ghomeshi  in the film even though he’s now a pariah in the wake of his sexual assault trial.

“Why did you include that?” M.I.A. asked Loveridge, who looked caught off guard.

The filmmaker said the interview was a pivotal one as it visually made clear the emotional toll bad press had taken on her. As the film shows, M.I.A. had produced the video as a way to talk about genocide in Sri Lanka when she was being cut off or silenced by mainstream media outlets.

“You can read a lot of emotion in her face,” he explained. “I thought the footage was really rich. [You can see] she feels really battered down.

“I didn’t consider taking it out based on [Ghomeshi’s reputation],” he said as applause rang out. He then turned the question around: “Why would you take that out?” As the audience member stuttered, M.I.A. jumped in.

“There were loads of people in the film that were not credible,” she said, before elaborating on the Q interview. “I was not in a position to speak about the things I was going through clearly with him because he didn’t understand it and I was still processing it. That interview was just doomed to fail.”

Loveridge went into damage control mode after M.I.A. pulled a typical M.I.A. move and dished some behind-the-scenes gossip in a throwaway remark.

While talking about diversity in the music industry (or lack thereof), she explained how technology has changed distribution but not the nature of ownership nor the gatekeepers who decide who gets to watch and listen to what. A few streaming platforms have the distribution market cornered and “every venue is owned by two companies. Everything works on numbers.”

Then she added Netflix declined to acquire Matangi/Maya/M.I.A. because “no one is going to watch this film because Asians don’t watch films.”

Loveridge immediately intervened to clarify that when he recounted his dealings with Netflix to M.I.A., “I was paraphrasing.”

The NFL apparently dropped its lawsuit against M.I.A. because of Loveridge’s spat with Interscope

In one simultaneously funny and nerve-wracking sequence, the doc covers the moment M.I.A. gave the middle finger to the camera during Madonna’s Super Bowl halftime performance in 2012. The fallout included the NFL demanding $16.6 million for allegedly breaching her contract and for “restitution.”

What the doc doesn’t mention is how the legal wrangling was resolved. An audience member asked for specifics and M.I.A. said the terms of her  settlement prevent her from talking about it, but then said Loveridge could shed some light on the situation.

Most people became aware that Loveridge was making a doc about M.I.A. after he leaked teaser footage online in 2013 as part of a dispute with Interscope Records. The label was apparently delaying production at the time.

“The NFL got so shaken that [the film] might be a takedown of the NFL, they actually backed out and dropped the lawsuit,” he said.

After M.I.A. and her family moved to the UK in 1986 she did not see her father, a Tamil activist and revolutionary, for years. He appears briefly in the film in family footage, so an audience member wondered why he wasn’t featured more prominently later on.

“He hasn’t seen [the film] yet,” M.I.A. said. “That would be the next step. He’s in Sri Lanka and I’m not allowed to go there because I’d get killed.”

Loveridge added that her father can be glimpsed at a charity event near the end of the film, but he cut down footage of a conversation between father and daughter at the same event because the politics they were discussing were complex. Also he had been receiving bad advice from film editors he was showing rough cuts.

They told him: “It’s about a girl searching for the love of her daddy.”

Cue groans from the crowd.

“No, I know her really well and that’s not who she is,” Loveridge said he told his would-be mentors.

M.I.A. is ambivalent on whether her activism has fostered better communication between Tamils and Sinhalese people

Asked whether she’s noticed an improvement in communication between Tamils and members of Sri Lanka’s majority Sinhalese population, M.I.A. said she’s “half and half.”

She recounted an anecdote from her 2017 lecture at Oxford University when a Sinhalese student got up and walked out. She followed him to the bar to ask why he left and found him drinking a Coke. “You’re not even drinking anything interesting,” she told him.

Though 20 years younger than her, the guy would “not address that racism exists,” adding that meaningful reconciliation between Tamils and Sinhalese in Sri Lanka is not happening. She pointed out that the debt-ridden country has been allowing billions in Chinese investment – including ceding control of a strategic port – which critics have said is threatening the country’s sovereignty.

Her comments at Hot Docs echoed those voices.

“The Tamils were the last people in Sri Lanka to fight for the identity of what Sri Lanka is,” she said. “It’s not just the Tamils that lost, but the Sinhalese lost, too.”