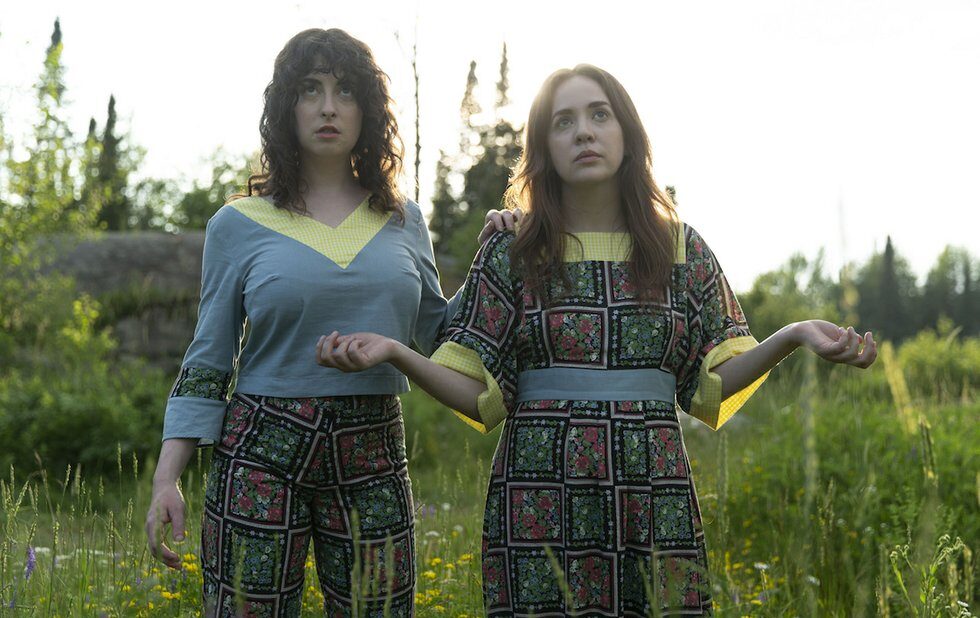 With any luck, 25 years from now people will be arguing over whether the events depicted in Kayla Lorette and Evany Rosen’s New Eden are real.

They are not. The story of a late-70s feminist utopia established in rural British Columbia and its descent into chaos and murder is complete fiction, with Lorette and Rosen (whom Toronto audiences may recognize from their Network Notes improv show) doing some fairly ridiculous things as New Eden’s codependent leaders Katherine Wryfield and Grace Lee. But the true-crime genre has reached a point where all sorts of outsized behaviour seems credible, and New Eden has fun deconstructing the way these shows package their stories in the most sensational way possible.

“We started with what would have been a much cheaper and easier idea, and then of course didn’t do that,” says Rosen. “We originally had this idea where two women had been in like a male-led cult, and one woman had gone down for its crimes and been in prison, and the other one, who didn’t go to prison, is picking her up from jail in the first episode – and they have to share an apartment together.

“And then we thought, ‘Why would we make an easy web series when we could make the most dense and complicated show possible?’ she laughs. “We wanted to explore the idea of what would happen in a cult scenario if two women were at the apex of it, and what personalities would be required.”

New Eden takes the form of a 1992 television documentary (subtitled When Women Sin for additional sizzle), interweaving archival footage of Katherine and Grace’s colony with contemporary prison interviews with the pair.

“Even though it’s a comedy, we always wanted the show to feel like an authentic cultural object,” Rosen says. “We really wanted to do something different with this show, which was to keep the stakes quite high: there are bodies, there is a whodunit, that’s all [there] – but then to have all the comedy come from character, and how these ding-dongs react to a situation as it gets more and more absurd.”

Some of the absurdity includes a batch of bad honey, alien goddess worship and at least one murder. And running through it all is Grace and Katherine’s weird codependency, which Rosen and Lorette play out as a fascinating, passive-aggressive tug-of-war.

“I always describe Katherine as an evil loser, which makes me laugh very hard, and Grace is more of a likable psychopath,” Rosen says. “We always talked about how Katherine is like this difficult girl that invited everyone in the class to her birthday party, and nobody showed up except Grace. And that’s their whole life together, forever. Grace doesn’t care that no one else is there, it just means more alone time with Katherine.”

“They kind of need each other to function in this way,” Lorette says. “And we knew we wanted all the narrative things to come from that. Of course Katherine never had any ambition to run a cult she doesn’t even like being around people. But her need for validation just keeps having her double down. And Grace, you know, she has these deep psychological problems that keep her locked into this awful, loyal relationship.”

Over the show’s eight episodes, we see how deep that dysfunction goes – or at least how it’s presented by two young male filmmakers in 1992, which is where New Eden gets really interesting.

“That was really important to us in making the show,” Rosen says. “We always wanted to have two women at the centre of a true-crime narrative, but then also this idea of whose documentary is it: who’s telling you the story? Why are they telling it right now? And how does their spin affect the story?”

“True crime is about authorship at its core,” Lorette adds. “Katherine and Grace tell their story and their truth, and then there’s Travis and Jake’s truth, and then later there’s Forbidden Fruit, this campy movie within the thing that we’ve created. There’s many different angles and lenses, and that was important to us.”

Lorette and Rosen also jumped at the chance to examine the current cultural fascination with true crime, and why women are drawn to the genre.

“A big part of it is the idea that women are so often the victims in true crime [stories] – you know, 98 per cent of them,” Rosen says. “I think women want to look at it to just understand the dark edges of the world, and the worst of what could happen to you, in a digestible, comfortable way. But there’s this complicated idea that when you do hear about a female killer, as a true crime enthusiast and as a woman there’s a dark part of your brain that goes, ‘Well, good for her a bit!’ And you think ‘Ooh, that’s weird. I gotta explore that.’ So that’s something we’ve had in the back of our minds as well.”

And now New Eden is complete and streaming on Crave, with a marketing campaign that plays up the historical aspects of its production just enough so that people might stumble onto it decades from now and think the whole thing was real.

“The world would really have to blow up in a way that this is the only thing that remains in 25 years,” Rosen says, “but I love this logic.”

“That’s my hope, too,” Lorette says. “If we can trick some people in the future that’d be great.”