Roma, If Beale Street Could Talk and Burning top the list of the year's best 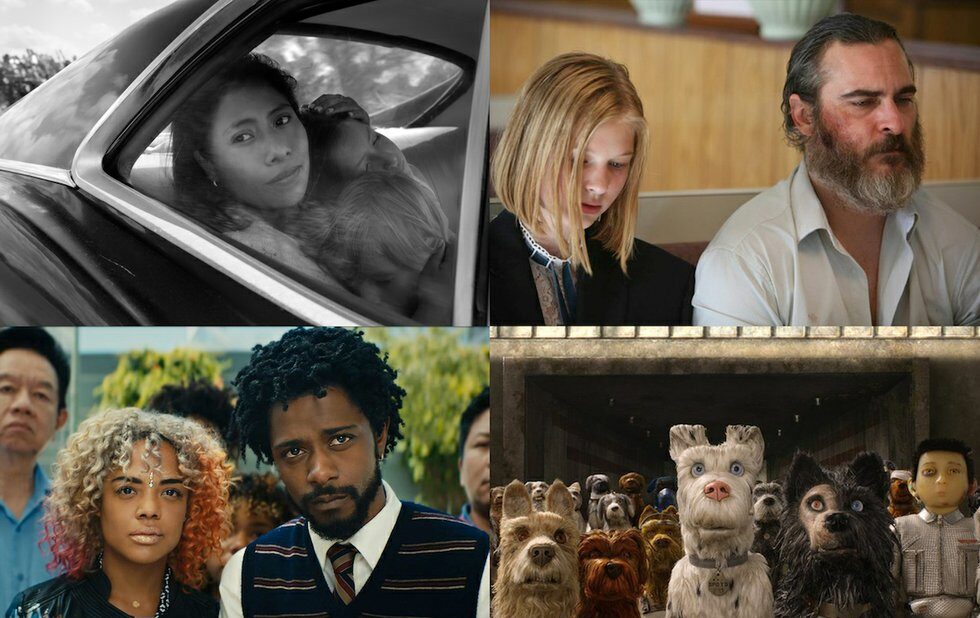 Clockwise from top left: Roma, You Were Never Really Here, Sorry To Bother You and Isle Of Dogs.

When the world gets darker, the light of a movie projector keeps us sane – maybe that’s why this year was one of the richest for cinema in a long while. And by “cinema,” I mean “movies you see on a big screen,” which brings me to my top pick…

Is there anything more punk than making a movie for Netflix that actively resists being watched on Netflix? How about making a masterpiece? Cuarón’s autobiographically tinged study of a young woman (Yalitza Aparicio) working as a maid for an affluent Mexico City family in the early 70s might be his best film, which is really saying something about the director of Children Of Men and Gravity. It’s also a genuine motion picture event, photographed in large-format 65mm and mixed in multichannel Dolby Atmos for an immersive experience that deploys emotional intensity in waves, like the sea tide slowly overtaking sand on a beach. Sure, you can watch it on your phone. But please don’t.

2. If Beale Street Could Talk

Love was the salvation for the lost soul at the heart of writer/director Jenkins’s Moonlight love may not save anyone in his follow-up, but it’s the thing that keeps them fighting. An adaptation of James Baldwin’s 1974 novel about a young Harlem couple (KiKi Layne, Stephan James) torn apart by the systemic racism that’s poisoned their world, Beale Street is an exquisitely realized drama, with Jenkins and his amazing ensemble (which includes Brian Tyree Henry, Colman Domingo and the magnificent Regina King) playing small, precise scenes about people refusing to give up their dignity in the face of indifference. It’s devastating, and it’s wonderful.

In his first film since 2010’s exquisite Poetry, Lee coaxes an epic tale of discontent and revenge out of Haruki Murakami’s short story Barn Burning, focusing tightly on Jong-su (Yoo Ah-in), a young man adrift in Seoul who meets a girl (Jeon Jong-seo) from his village but loses her to a monied playboy (Steven Yeun, of The Walking Dead and Mayhem). And gradually, almost unnoticeably, Burning shifts from one sort of movie to another, finding its purpose in the accumulation of small details we’re never allowed to fully understand – but which Jong-su chooses to interpret in the worst possible way.

4. You Were Never Really Here

Ramsay’s deconstructed revenge movie – based on Jonathan Ames’s more straightforward novella about a finder of lost children – infuses standard action beats with queasy dread and an unnerving obliqueness. More often than not, the worst things happen just off-screen, where we can conjure our own awful visuals to accompany the sounds of the hero’s trusty ball-peen hammer. As that hero, Joaquin Phoenix embodies a lifetime of brutality, carrying the weight of it in his weary eyes and hulking frame – and so desperate to make it all end that your heart breaks for the beast.

5. Sorry To Bother You

The new Black cinema produces another masterwork with Riley’s first feature, which nods to Robert Downey’s Putney Swope and Terry Gilliam’s Brazil in its themes but feels wholly original in its execution, walking a razor wire between cringe comedy and political activism. Sorry To Bother You starts out as a social satire about an aimless Oakland dude (Atlanta’s Lakeith Stanfield) trying to climb a corporate ladder and mutates into a gonzo nightmare built on centuries of the cynical exploitation of Black workers by white masters, corporate or otherwise. And somehow Riley always keeps the laughs coming – if only so he can choke them off in our throats.

Decker’s electrifying indie explores the push-and-pull relationship between an experimental theatre director (Molly Parker), a teenage prodigy (Helena Howard) and the teen’s mother (Miranda July), all of whom want very different things from one another. It’s a showcase for the phenomenally talented Howard, but what Decker does behind the camera is just as daring, and as artful, as what her discovery does in front of it.

Schrader’s reinterpretation of Robert Bresson’s Diary Of A Country Priest for the age of the American mega-church is his best film in decades: like Martin Scorsese’s Silence, it’s the work of a man who’s spent a very long time thinking about his subject. Here, it’s the conflict between modern evangelical Christianity and the actual teachings of Christ, as experienced by a tormented priest (Ethan Hawke, in a career-best performance) trying to minister to his congregation while enduring his own profound suffering. Not exactly a good time at the movies. But it’s brilliant cinema.

I don’t think it’s a coincidence that several of my favourite movies this year focus on characters acting ethically and honourably, even when it would be easier to bend a rule or just look the other way. Neville’s cinematic profile of Fred Rogers presents the life of the beloved children’s television host as an instruction manual for how to be human. In an age increasingly defined by casual cruelty, seeing Rogers extend compassion and empathy to everyone he meets – and turning his own issues into teachable moments – is genuinely inspiring.

Anderson’s post-apocalyptic comedy set in a near-future Japan – where a plague forces the citizens of Megasaki City to exile their pets and strays to offshore Trash Island, creating a new four-legged society – caught some fire for its cultural appropriations. But it’s a conscious allegory for samurai movies that deploys its language barrier in a very deliberate way. And Bryan Cranston’s rueful voice performance as Chief, a masterless warrior discovering what it means to embrace a cause (or a friend) brings it all into focus.

If King’s first Paddington movie felt like magic, his second is every bit as delightful, charming and moving, leaving the first film’s refugee allegory behind for a somewhat giddier tale, exploring the ways in which the friendly little bear – once again, a digital character voiced with perfect diction by Ben Whishaw – makes almost everyone he meets a better person. There’s a warmth and a joy running through these films that overwhelms in the best possible way, without ever tipping into syrupy manipulation. Maybe that’s just the difference between treacle and marmalade.

The Ballad Of Buster Scruggs, Black Cop, Black Panther, Can You Ever Forgive Me?, Cold War, The Death Of Stalin, Eighth Grade, The Endless, Fail To Appear, The Favourite, First Man, Hotel Artemis, Leave No Trace, Loveless, Maison Du Bonheur, Mary Goes Round, Minding The Gap, Permission, A Star Is Born, Shoplifters, The Sisters Brothers, Support The Girls and Transit.