The Cinesphere has officially reopened and it’s glorious 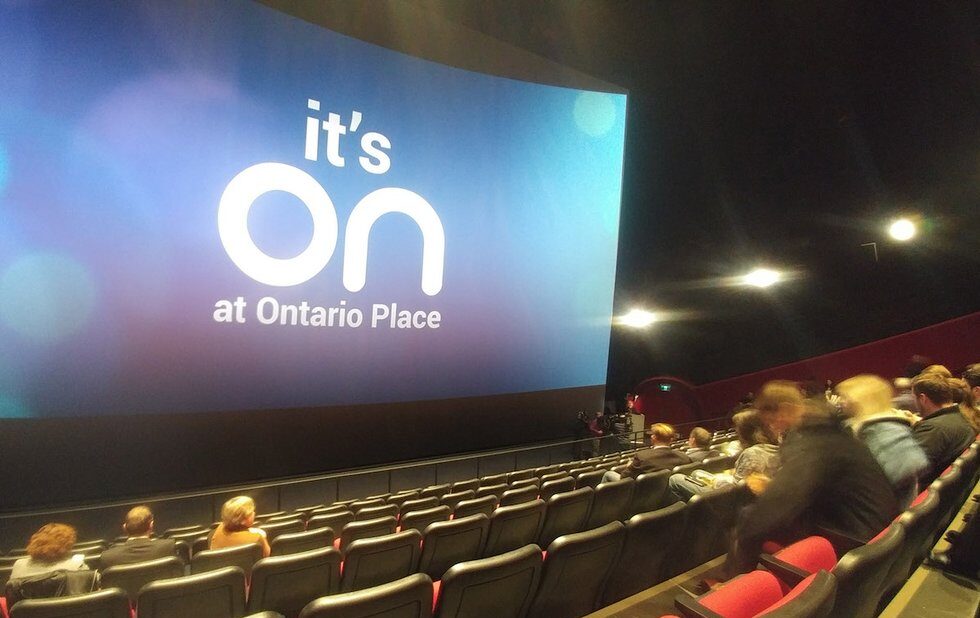 If you were a kid in Southern Ontario in the 70s, 80s or 90s, you likely have fuzzy memories of taking field trips down to Ontario Place and seeing a movie at the Cinesphere.

Maybe it was North Of Superior, Graeme Ferguson’s revolutionary large-format travelogue, shot with the camera mounted to boats and small planes. Maybe it was To Fly! or Rivers Of North America or Hail Columbia! or Speed (no, the other one) or any of the dozens of other documentaries commissioned to exploit the massive visual scale of IMAX. Whatever you saw, I’d wager you haven’t forgotten it.

The experience of going there might even seem like a dream now: the gantry-style entryway stretching over the edge of the lake, hundreds of metres long the narrow lobby hall opening up into the vast interior of the auditorium and that screen stretching six-storeys high.

I watched grown men and women relive that wow moment on Thursday night (November 2) at the Cinesphere’s official reopening.

The renovation – quietly carried out over the last year, and teased in September when the venue was used for TIFF screenings of Christopher Nolan’s Dunkirk and North Of Superior – is part of an ongoing revitalization of Ontario Place that began with the opening of Trillium Park in June. And it’s glorious.

The screen is new. The sound system is state of the art. There are two projection rigs: one for IMAX 70mm film prints and another for IMAX Laser presentations, meaning the venue can now screen virtually anything. (IMAX Laser projectors can screen conventional digital films, the same way a Blu-ray player will upconvert a DVD image to HD, though of course the resolution isn’t the same.)

The old seats, which were designed for shorter performances and grew increasingly uncomfortable in longer programs – as anyone who squirmed through those Christmas-season screenings of Apocalypse Now or Lawrence Of Arabia back in the day will recall – have been replaced with softer, more accommodating cinema chairs. (No cupholders, though, which seems weird in 2017.) And the washrooms have been renovated, which is awfully nice for those of us who remember their shabby state before the venue was closed, along with the rest of the park, in 2012.

At the reopening ceremony, which included another screening of Dunkirk, Ontario Minister for Tourism, Culture and Sport Eleanor McMahon announced that Cinesphere will screen films on weekends year-round, with Ontario Place partnering with non-profit organizations to develop a new program “to make the Cinesphere more accessible to young people and their families.” That program starts with a donation of 50 tickets to Kids Up Front Toronto.

McMahon also teased Ontario Place’s winter program, which will include “illuminated sculptures by Ontario artists” and an ice rink. And while she didn’t discuss any plans for Cinesphere programming beyond the initial bookings for the month of November – Christopher Nolan’s Dunkirk Friday, Saturday and Sunday evenings and Saturday and Sunday matinees of Disney’s live-action Beauty And The Beast remake – that’s a very good start.

I mean, Beauty And The Beast isn’t very good, but it does make decent use of the IMAX format and it’ll get families down to the park. The real attraction is the IMAX 70mm print of Dunkirk, which may be the most vivid theatrical experience I’ve had in years.

I was impressed by Nolan’s film when I saw it in its conventional 70mm presentation this summer, but the IMAX version is an entirely different animal: an assaultive, chaotic, overwhelming experience that amplifies both the technical achievements and the visceral thrills. In an ordinary auditorium, Dunkirk grabs you… but when you’re enclosed in the dome of Cinesphere, it doesn’t let go.

If you haven’t yet caught up to the movie, this is the best possible place to watch it. If you’ve seen it already, you have an excellent excuse to see it again. Just remember to bundle up – it’s colder by the lake.

Ontario Place Cinesphere is now open at the west entrance of the park, 955 Lake Shore West. The full screening schedule and ticket links is here.