Oscars 2019: Roma and The Favourite lead, Green Book and Bohemian Rhapsody fall behind

Snubs include If Beale Street Could Talk, First Man and Won't You Be My Neighbor? 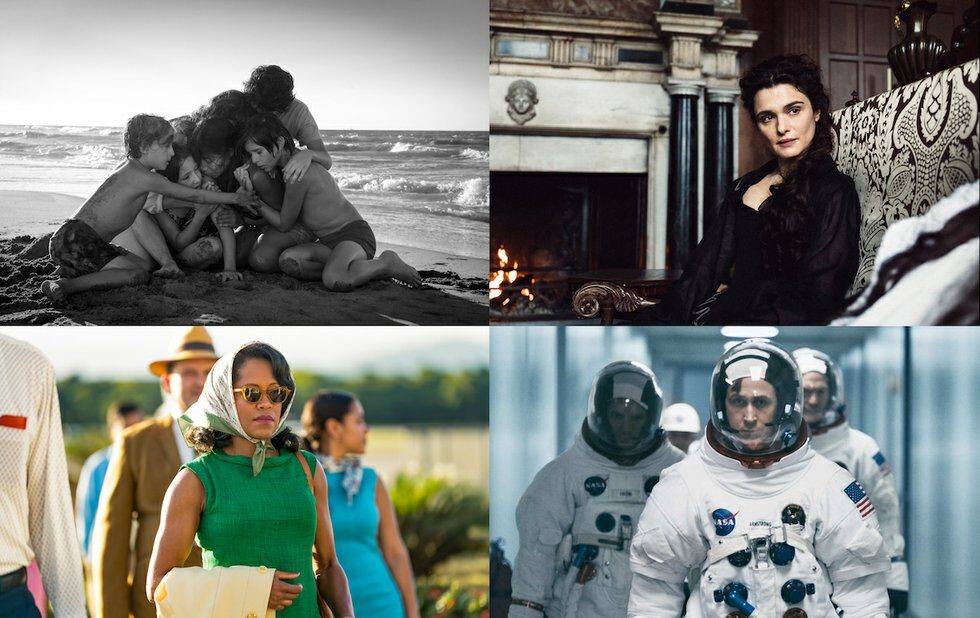 Roma (clockwise, top left) and The Favourite lead the Oscar nom pack, while First Man and If Beale Street Could Talk were largely ignored.

The Oscars are not the Golden Globes, and this morning’s announcements of this year’s Academy Awards nominations was a pleasant reminder that there’s still room for genuine art among the commercial crowd-pleasers. Maybe it’s not a total overthrow of the system, but… well, you know. Baby steps.

Sure, the problematic studio pictures Green Book and Bohemian Rhapsody – which took the Hollywood Foreign Press Association’s top prizes for comedy/musical and dramatic motion picture earlier this month – are still in the running, each up for best picture, actor (Viggo Mortensen/Rami Malek) and film editing, with Green Book also nominated for supporting actor (Mahershala Ali) and original screenplay, and Bohemian Rhapsody vying for sound editing and sound mixing. But they’re not the front-runners. For that, the Academy went a little more high-minded.

Alfonso Cuarón’s Roma and Yorgos Lanthimos’s The Favourite racked up 10 nods each to lead the pack, with Bradley Cooper’s A Star Is Born and Adam McKay’s Vice close behind with eight nominations apiece. Ryan Coogler’s Black Panther and Spike Lee’s BlacKkKlansman round out the eight best picture contenders with seven and six nominations respectively.

No sooner had presenters Kumail Nanjiani and Tracee Ellis Ross finished reading out the categories than we all started arguing over what the slate of nominations meant, like seers arguing over a pile of bones.

1) Who was snubbed? 2) What film could have been treated better? 3) Does a best picture nomination for Black Panther mean the Academy will stop trying to make its Most Beloved Shiny Popular Movie award happen?

The answers, as far as I’ve been able to determine: 1) John Krasinski, Emily Blunt, Bo Burnham, Debra Granik, Boots Riley, Lee Chang-dong, Helena Howard and Regina Hall 2) First Man, If Beale Street Could Talk and Can You Ever Forgive Me? and 3) no, don’t be ridiculous, the producers of the Academy Awards won’t be happy until they’ve turned it into a slightly older version of the MTV Movie Awards – which is never going to happen, because the Academy itself is too rigid and self-serious to ever truly loosen up.

For the most part it’s a pretty satisfying layout. There were no women nominated for best director (again), but Granik’s Leave No Trace and Marielle Heller’s Can You Ever Forgive Me? were long shots, and Lynne Ramsay’s You Were Never Really Here a longer shot still the nominees offer a surprisingly broad cultural mixture of male filmmakers, with Lee, Lanthimos, Cuarón and McKay joined by Pawel Pawlikowski, director of the foreign-language nominee Cold War.

The best actor category shakes out to the usual suspects: Christian Bale for Vice, Bradley Cooper for A Star Is Born, Willem Dafoe for At Eternity’s Gate, Malek for Bohemian Rhapsody and Mortensen for Green Book. If the Academy wanted to nominate a charismatic actor for a dialed-down performance, I would have preferred to see Ryan Gosling up for his tightly wrapped Neil Armstrong rather than Bale’s latex-smothered Dick Cheney, but that’s life I’m also miffed on behalf of Ethan Hawke, whose masterful, minimal performance in First Reformed went unrecognized even though Paul Schrader’s nomination for best original screenplay tells me Academy members did watch their screeners.

The best actress field is a little hard to argue about, offering fewer stunts and more depth: Yalitza Aparacio, who’s in every scene (and almost every shot) of Roma Glenn Close and Olivia Colman, the powerhouses of The Wife and The Favourite Lady Gaga, whose breakout turn in A Star Is Born can’t be discounted and Melissa McCarthy, who finds every brittle, caustic edge of Lee Israel’s personality in Can You Ever Forgive Me?

The supporting categories are similarly solid: Ali for Green Book, Adam Driver for BlacKkKlansman, Sam Elliott for A Star Is Born, Richard E. Grant in Can You Ever Forgive Me? and Sam Rockwell in Vice all did fine work, as did Amy Adams in Vice, Marina de Tavira in Roma, Regina King in If Beale Street Could Talk and Emma Stone and Rachel Weisz in The Favourite.

Speaking of Elliott turning up in the supporting-actor race after being overlooked by the Golden Globes: it’s good to see A Star Is Born reclaim some of the momentum that Green Book snagged after TIFF they’re both mainstream-friendly studio pictures elevated considerably by the strength of their performances.

But A Star Is Born has more to say about its central relationship – and says it in a more complex manner, thanks to Cooper’s direction – than Green Book, which is built on simplistic clichés. I’d also argue that A Star Is Born builds its drama on archetypes, whereas Green Book deals in stereotypes, above and beyond the whole Driving Miss Daisy thing. (I still think Mortensen and Ali are wonderful in it, but should that make the movie an Oscar contender? Forget about it.)

And where Green Book might have played well with the HFPA, and with a certain old, white and male cohort of the Academy, the movie’s nominations might serve as a test case for Oscar’s diversity initiative over the last couple of years, the Academy has brought in a new slate of younger, more diverse members in an attempt to address racial and gender gaps. Those members might be more willing to get behind Roma or The Favourite – and they absolutely should.

Another indication that the Academy is making progress overall on the diversity front: none of the titles in the documentary-feature race were directed by a white man. Free Solo is directed by Jimmy Chin and Elizabeth Chai Vasarhelyi Hale County This Morning, This Evening by RaMell Ross Minding The Gap by Bing Liu Of Fathers And Sons by Talal Derki and RBG by Julie Cohen and Betsy West.

I mean, I would have rather seen Morgan Neville’s thoughtful Fred Rogers doc Won’t You Be My Neighbor? get the nod instead of the decent but undistinguished RBG, but I can also see how Ginsburg might get more traction in the current political moment – though I’m glad to see that goodwill didn’t extend to any support for the truly risible biopic On The Basis Of Sex.

I’m also going to venture a guess that three of this year’s cinematography slots going to Cold War, Never Look Away and Roma – all of which are also up for the best foreign-language prize – is an indication that the Academy is stretching its boundaries. (The Favourite and A Star Is Born are the other two cinematography nominees the other two foreign-language contenders are Capernaum and Shoplifters.) And okay, Never Look Away was shot by the American veteran Caleb Deschanel, who’s been nominated five times before, but it’s still a big deal.

Oh, and for those of you keeping track of the Canadian nominations: Jeremy Comte’s Fauve and Marianne Farley’s Marguerite are both up for best live-action short, while Alison Snowden and David Fine’s NFB toon Animal Behaviour and Trevor Jimenez’s Weekends are in competition for best animated short, along with the Pixar short Bao, an American production written and directed by Toronto’s Domee Shi.

Maybe Ryan Gosling needs to play an animator in his next movie. That might get the Academy to notice.

The 91st Academy Awards ceremony will be held in Los Angeles on February 24. See the complete nomination list here.