Where to watch outdoor movies in Toronto this summer

From Christie Pits to Regent Park, there's no shortage of outdoor cinema options happening across the city in summer 2018 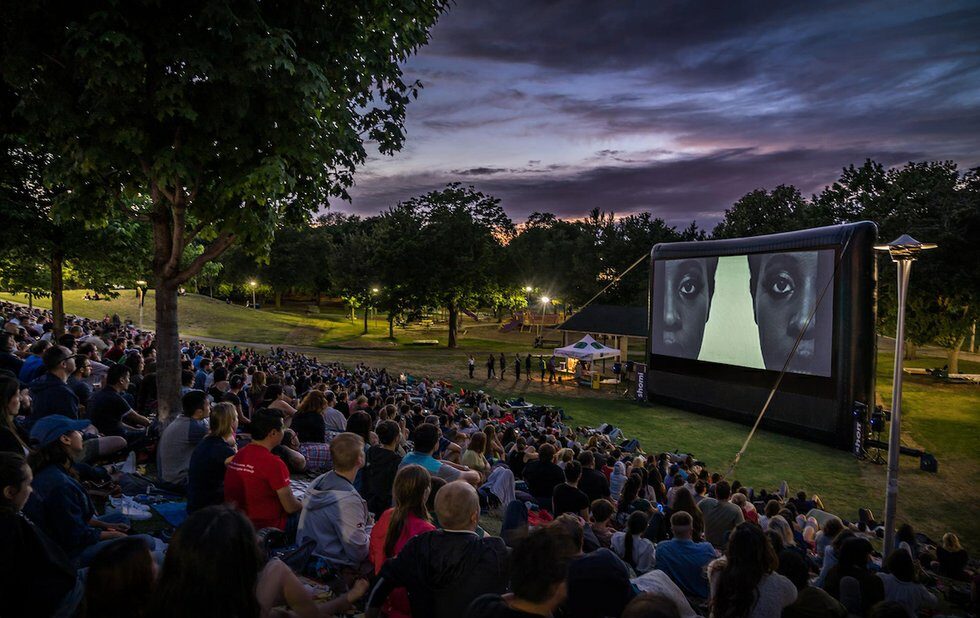 It’s nice to watch a movie outside. Assuming the night isn’t too humid and the mosquitos aren’t trying to eat you, and that guy who parrots back the best lines to his friends isn’t sitting directly behind you. Seriously, Gary, you’re the worst.

Toronto Outdoor Picture Show’s theme for this year is Cinematic Cities, spotlighting a different metropolis every week. This year, the series kicks off on June 17 in Fort York with recent Cannes winner Spike Lee’s 1989 breakthrough Do The Right Thing. After that, the series continues at the Christie Pits Film Festival with John Waters’s Baltimore-set Hairspray (June 24) then it’s Toronto via Sarah Goodman’s Porch Stories on Canada Day (July 1). Other destinations include Hong Kong in In The Mood For Love (July 15), Paris in Amélie (August 5) and Vienna in Before Sunrise (August 12). Every film will be preceded by at least one short, and the whole thing closes with a surprise screening on August 19. As always, this series is free/pwyc, with donations gratefully accepted.

The west-end park screens movies on the fourth Saturday of every month from June to September. This year’s titles are Babe (June 23), Charade (July 28), Ghostbusters (August 25) and Moana (September 22). And… there will be pizza.

There’s nothing like trying to watch a movie surrounded by all the billboards in the world. But if you can ignore the mega-wattage and focus on the screen, this year’s City Cinema program is dedicated to rockumentaries. Get rolling June 26 with Festival Express, the 2003 celebration of 60s folk rock other highlights include the tribute concert Leonard Cohen: I’m Your Man (July 10), the exhilarating Funk Brothers doc  Standing In The Shadows Of Motown (July 17) and Morgan Neville’s Oscar-winning examination of backup singers 20 Feet From Stardom (July 31). It wraps up August 28 with last year’s Tragically Hip curtain call Long Time Running.

The St. Lawrence Market BIA has three Wednesday night screenings lined up in St. James Park: Kissing Jessica Stein (June 21) for Pride Week preceded by a drag show on the Gazebo Stage, and later in the summer Coco (July 26) and Breaking Away (August 23).

Movie Nights In The Beach Village

Wednesdays are movie night in the Beach. Residents voted on the program, which is heavy on comedy classics like Uncle Buck (July 5), Mrs. Doubtfire (July 12), Ghostbusters (August 9), Mean Girls (August 16) and Ferris Bueller’s Day Off (August 30). Screening locations alternate between Kew Gardens and Ivan Forrest Gardens and popcorn is free.

Yes, it’s exactly the same theme as the Sunday night series at Christie Pits, and it’s put on by the same organization, the Toronto Outdoor Picture Show. But here’s the twist: it’s on Thursdays, it’s only for the month of July, and the movies are different! (I guess that’s three twists.)

Dancing In The Park

Saturdays tend to be as quiet as Fridays for this sort of thing, but the Aga Khan Museum brings back its Dancing In The Park series for a second year with three screenings: La La Land, The Wiz and the animated kids film Ballerina.

Under The Stars: Movies In The Park

People seem to prefer patios over outdoor movies on Friday and Saturday nights, but Sail-In Cinema – down at Sugar Beach during the dog days of the season – is one of the city’s biggest and most unique outdoor movie screenings. If you have a boat, you can drop anchor in a limited number of parking spots. You can go to their website and vote for the films you want to see!