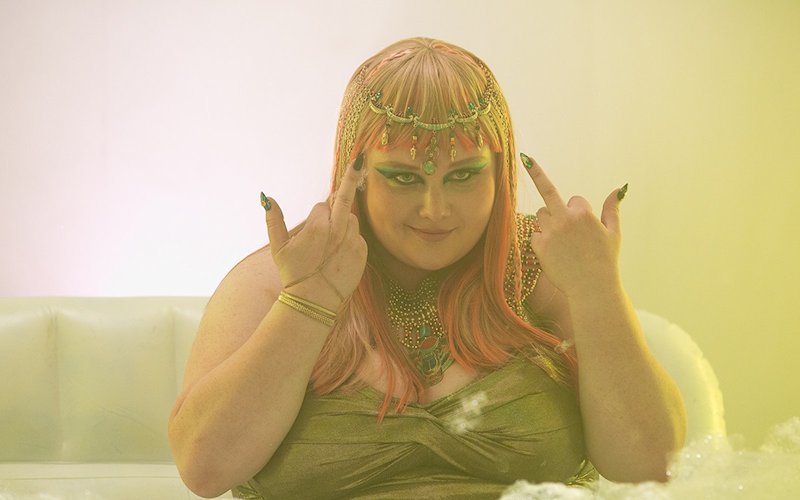 Patti Cake$ star Danielle Macdonald remembers her first acting lessons. Students were asked to write down character types for the other aspiring actors in the room, like leading man, jock, romantic interest and so on.

Macdonald recalls that she got ascribed roles based on her plus-size physique.

I get my sheet and Im the funny best friend or the girl that gets bullied.

Im sitting with Macdonald in a Leslieville recording studio exploring what it means to be white and underrepresented. It goes without saying that opportunities for plus-sized women in the performing arts are limited, though Macdonald is currently beating the odds with upcoming starring roles opposite Jennifer Aniston in Dumplin and the Elizabeth Banks-produced White Girl Problems.

These roles are arriving on the heels of Macdonalds breakout performance in Patti Cake$.

The Australian actor plays Patricia Dombrowski, an aspiring rapper in Jersey adopting the stage name Killa-P. She drops lines like, Should be getting busy but Im feeling Gary Busey, while onlookers cant conceal their WTF expressions. They are, of course, looking at a white girl trying to elbow some space in hip-hop. Shes also a marginalized girl who is connecting to the one modern musical genre that speaks loudest to the marginalized.

Almost two decades after Eminem proved his greatness, there are still questions about when white is all right in hip-hop. Eminem mostly got a pass because his talent was phenomenal something that women or people of colour are often forced to prove repeatedly just to get noticed in every field. Meanwhile, acts like Macklemore and Iggy Azalea are still suspect, accused on occasion with cultural appropriation.

It can even get a bit weird when you see white people enjoying hip-hop. I mean if youre singing along, you got to get around all those expressions that youre simply not allowed to say.

Theres definitely a cautiousness to how you listen to it and enjoy it, says Macdonald. You are definitely more aware. [White people] dont face all the challenges that people of colour do. I would love to live in a world that is purely equal, where everyone has equal opportunities in every way. But that is not reality. So I think you really have to have respect. There is this respect for the culture of it.

How to respect the culture is something writer and director Geremy Jasper honed in on in Patti Cake$. The former music video director, who once upon a time trod lightly as an aspiring white rapper, shapes his leading lady into a novelty act who at a key moment is accused of being a culture vulture. Her lyrics and slang are imitations, and her growth involves embracing her whiteness in a climactic showstopper.

Jasper goes on to point out that Eminems early demos sounded like he was cribbing Nas. He had the skills but he wasnt Slim Shady yet.

Every artist goes through that. Trying to find their own voice.

But if Eminems music was embraced by hip-hop culture, his success was a warning sign that even in hip-hop, a white artist (comfortably embraced by white audiences) could eclipse the artists whose shadows he walked in. Eminem says so himself on the track White America: Lets do the math: if I was Black, I woulda sold half.

And the trend continued. There was an Eminem biopic (8 Mile) before 2Pac, Biggie and NWA got their stories on the big screen. Grandmaster Flash had to settle for his Netflix incarnation in The Get Down. And Flash was just a bit character in that.

And who could forget that time when Macklemore dominated the rap categories at the Grammys over Kendrick Lamar a situation that left the former awkwardly apologetic.

I like Macklemore, says Macdonald, as our conversation narrows down with nowhere left to go.

But Kendrick is phenomenal. Ive never tried and practiced a song that was as hard as when I practiced Kendricks verse on Control. Hes a genius. I think that people do recognize it.