Toronto critic Adam Nayman, author of a monumental new book about the filmmaker, explains how the 1999 movie anticipated the men's rights movement 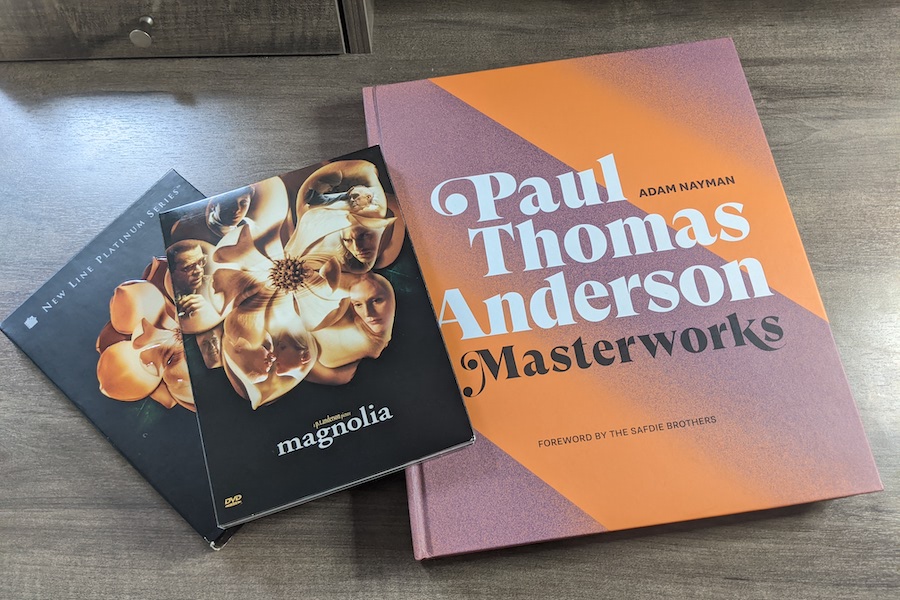 In 1999, Paul Thomas Anderson dropped Magnolia, a Robert Altman-inspired Los Angeles mosaic that (spoiler alert) ends with a rain of frogs straight out of Exodus. The three-hour-plus film connects stories about people who are hurting and in isolation, and then get ushered towards something apocalyptic. It feels so 2020.

The way Magnolia hits today only occurred to me while reading film critic and author Adam Nayman’s monumental new book, Masterworks. Nayman deep dives each and every film from Paul Thomas Anderson (PTA) and more. There are interviews with PTA’s collaborators, along with asides on the music videos he directed and his influences.

There’s a forward from Josh and Benny Safdie, the sibling filmmakers behind last year’s high-anxiety Adam Sandler comic thriller Uncut Gems. They pay tribute to the master filmmaker who cast Adam Sandler in 2002’s Punch-Drunk Love, playing off the comedian’s strengths for a movie far from his wheelhouse, a Preston Sturges-style romantic-comedy.

Of course, the primary appeal of Masterworks is Nayman’s thoughtful, critical and loving analysis of PTA’s films, even the ones he doesn’t love, like Magnolia. Nayman spoke to NOW about Masterworks and Magnolia, in particular.

He and I are both in agreement (and in the minority) on this: Paul Thomas Anderson’s best films, the “masterworks” as Nayman puts it in his book, come later in his career. The filmmaker, whose claim to fame began with aping Martin Scorsese and Altman, hit the majors with 2012’s The Master, 2014’s Inherent Vice and 2017’s Phantom Thread. And 2007’s There Will Be Blood was a sizable stepping-stone to that mastery. Magnolia, which Nayman and I would rank near PTA’s bottom, tends to be a favourite if not the favourite among so many fans and critics. (For more on our affection for PTA’s best films, listen to my podcast.)

In Masterworks, Nayman doesn’t just give Magnolia its due. He argues that even if it’s not a masterful film, Paul Thomas Anderson “goes for it” with the level of craft, care and passion that goes into a masterwork. Nayman finds new ways to appreciate the film, its relationship to PTA’s canon and its moment in time alongside other films from 1999.

Those include Stanley Kubrick’s posthumously released Eyes Wide Shut, which has an intrinsic relationship to Magnolia. Tom Cruise, who stars in Eyes Wide Shut as a married man trying to get laid, also appears in Magnolia as a toxic television personality teaching MRA-types how to get laid. They also include Fight Club, David Fincher’s film about toxic men taking their frustrations out on the world, which also cast a long shadow over the coming decades.

Watch our conversation on Paul Thomas Anderson and Magnolia in the video or read an edited and condensed version below.

When Magnolia came out, I loved the shit out of it. It was only as I aged that I saw the bloat of it. I saw how a lot of the meaning is tacked on to showmanship versus the other way around. But when I’m reading your chapter on Magnolia in Masterworks, I got this new appreciation for how it would hit today, both its flaws and its strengths. It’s a movie about isolation and feeling you’re on the brink of catastrophe, which is so 2020.

If you look at those 1999 movies, there’s a real sense of on the verge. I’m simplifying it but The Matrix is on the verge of “the world becomes digital,” the desert of the real and the Baudrillian simulation. Fight Club is a movie I still have issues with. But it was correct about certain things. Not because male violence and incel culture got invented yesterday and Fight Club saw it coming. It touched something universal that at the time seemed excessive, but its moment has come.

And Magnolia is such a Y2K movie, whether PTA meant it or not. Something’s coming. We all have these lives. They’re haunted by the past. People are fucking up in the present. There’s not enough time to be forgiven before something is going to happen.

The big Hail Mary that Anderson throws, when the frogs come, is apocalyptic and regenerative. It’s an ending for characters, but for the most part it’s a new beginning. It’s this thing that shocks everybody into a sense of individual awareness, but it’s a collective event.

I want to go back to Fight Club. You and I agree that Anderson and Fincher are two master filmmakers working right now. Fight Club and Magnolia are regularly considered their best movies (or one of their best movies) for a certain crowd. These are objectively not their best movies. Fincher’s best is Zodiac. For Paul Thomas Anderson, it’s everything after There Will Be Blood. But people love them for these 1999 movies about a certain kind of masculinity.

They are about a certain kind of masculinity. They hit aspects of a teenage viewership where those teenagers live. They also appeal to the eternal teenagers at heart that are most 30-something and middle-aged dudes.

Fight Club is a dorm-room-poster kind of movie. It’s a very “don’t hate the band, hate the fans” proposition. Much like Clockwork Orange, it leaves room to be enjoyed for the “wrong” reasons. And I’m using that word a bit sarcastically. There are no right or wrong reasons. Art is subjective. But Fight Club is a movie that doesn’t just diagnose insular, petty, sexist masculinity. It kind of trains it.

With Magnolia, it’s the same area but a slightly different part of the coin. In Fight Club the rage and anger is expressed through violence and subversion. Magnolia is, and I’m using this phrase amusedly, a sad-boy movie.

The whole thing with Cruise’s character: he’s screaming “respect the cock,” but it’s about his flaccidity in the end. That’s why it’s a funny pair with Eyes Wide Shut. In Eyes Wide Shut, he can’t get laid. In Magnolia, he demonstrably can. But it’s a movie that takes Tom Cruise’s character to his (dying) dad’s bed side to weep and cry about whether he loved him or not. Cruise’s whole performance is a study in crumpling. That rigid, erect, Kubrickian [monolithic introduction of Cruise’s Frank T.J. Mackey] is something that the movie demolishes and reduces.

There’s something that’s maybe sentimental about that. A lot of guys are like, “I wish my dad loved me too.” I’m not trying to be sarcastic. The movie is right on that razor’s edge of packaging something and really analyzing it. And it’s very telling to me that Anderson wrote it after his own dad’s battle with cancer, which doesn’t mean you can’t criticize the movie. But it does give it personal dimension. I think it accounts for the movie’s lack of discipline. It’s hard to censor those feelings. 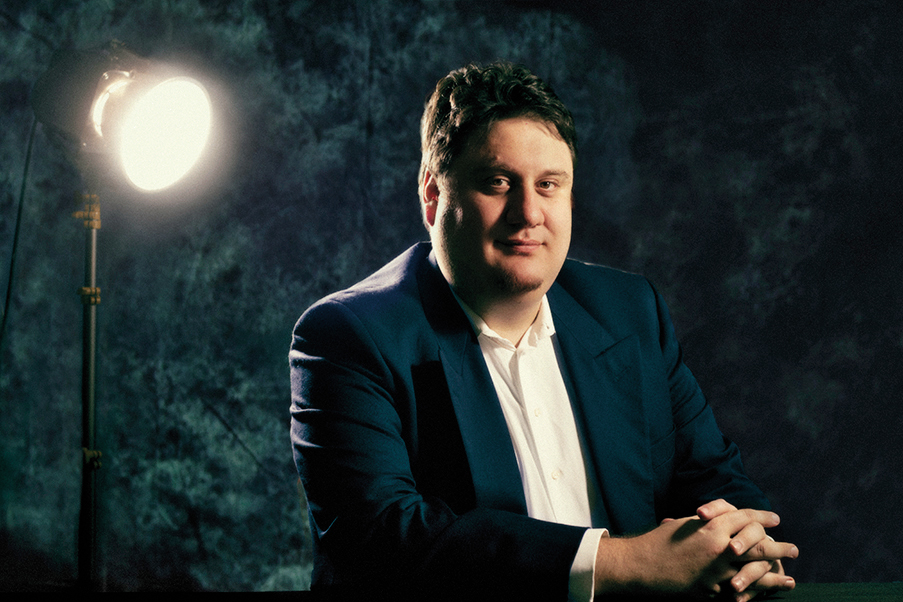 Masterworks author Adam Nayman in a pose mimicking The Master.

The thing is both Fight Club and Magnolia feel really prophetic, as you say in Masterworks, when you look at MRAs and such.

Fight Club is still the more ethically ambivalent potential recruiting tool movie because it yokes all that to an anti-corporate analysis that is pretty seductive when Brad Pitt is giving it to you. That Pitt monologue about the middle children of history has not exactly gone out of date. Whether you buy it in the first place is different. I think the whole point is it’s meant to be counter-intuitive that Brad Pitt is telling a room full of dudes, “you’ll never be movie stars.” This is Brad Pitt looking probably more beautiful than any man has ever looked in a movie.

In Magnolia, there’s much more of a: “This guy is a snake oil salesman; this guy is an asshole; this guy has got a fake name, grift and schtick, and we’re going to unveil that fakery to get to the scared little boy inside of him.” People might identify with that part of it. This movie may have been ahead of the curve in diagnosing how insidious [that is].

There’s like 15 storylines in Magnolia. The Cruise plot is the one that people remember most. And I think that’s because Paul Thomas Anderson has always yoked his own showmanship to these showman characters. The big speech that Cruise gives at the beginning of Magnolia, the big speech that Daniel Day-Lewis gives at the beginning of There Will Be Blood, and the various speeches that Philip Seymour Hoffman gives in The Master, they’re all coming from the same place. [These are] people who are acting like they have the answers. The movies are suggesting that there is something about America – both generally and specifically in those moments and places that they take place – where people want to hear that stuff.

In Boogie Nights, Don Cheadle is symbolizing a lone Black character in this white milieu. He tries to fit in by adopting these different aesthetics, like the Black cowboy thing. He actually gets a full arc, but that’s not who the movie is about.

In Magnolia, it’s very telling that there was a whole plotline more about Dixon, the mom and this character “The Worm” who is played by Orlando Jones, which was still stereotypically weighted towards the violent gangster element within the movie’s world. But then he cut it out. And what’s left is the rapping kid who mystically lays out the movie for you, and the interview for Cruise’s Frank T.J. Mackey, who as you say is there to hold the white guy to account.

When you lay out that degree of representation in those first three movies, in some ways you’re like, “Well, that’s more Black characters than in a David Fincher, Spike Jonze or Charlie Kauffman film.” But then this is a relativism game that you’re playing.

I find it interesting that Anderson’s maturity as a filmmaker also shows an improvement in how he depicts female characters. Phantom Thread being the ultimate example where he embraces a female perspective.

Theirs is an improvement, or at least an increased interest.

And I think part of what’s most egregious about Magnolia, the women exist at best in counterpoint to all kinds of lost men and at worst in afterthoughts – afterthoughts that have these really abject moments that are so unflattering.